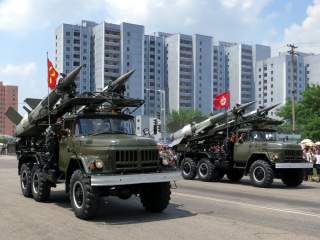 Grand military celebrations of a brutal regime are largely pointless, but when they reveal new missiles, it is probably worth taking note, especially when that regime regularly threatens to fling them at its neighbors. During the military parade celebrating the Day of the Sun, the anniversary of the birth of North Korean founder Kim Il-sung, the Korean People’s Army (KPA) showed off some of the weapons either already in its arsenal or under development.

The North presented half a dozen KN-11 (Pukguksong-1) submarine-launched ballistic missiles, as well as six KN-15 (Pukguksong-2), a mobile, land-based variation, for the first time during the parade. North Korea successfully test-fired the KN-11 last August and the KN-15 in February of this year. Both weapons use solid fuel and are capable of carrying a nuclear payload.

North Korea also rolled out two canister launchers, possibly for two solid-fueled intercontinental ballistic missile models. One is carried on a flatbed truck and bears a strong resemblance to the Chinese DF-31, and the other missile is carried on a Transporter Erector Launcher (TEL) and is similar to the Russian Topol missile or the Chinese DF-41. Saturday was the first time North Korea has presented this kind of capability.

The missiles in the parade tell observers a great deal about North Korea’s approach to propellants. “The signal that they’re trying to send is that they are moving ahead with solid-fuel missiles,” Melissa Hanham, an expert at the James Martin Center for Nonproliferation Studies in California, told the Washington Post.

Furthermore, with the emphasis on TELs, North Korea is signaling that its weapons will be much more survivable.

Rather than firing from fixed positions at known missile bases, the North is rapidly developing the ability to fire from anywhere in the country. The tracks on some of the TELs allow the KPA to move its ballistic missiles across rugged terrain. If that is not troubling enough, the use of solid fuel means less preparation time and a limited crew. Road-mobile, solid-fueled missiles can be fired from just about anywhere with little to know warning, and they are difficult to track, making them less vulnerable to pre-emptive strikes.

Weapons like the KN-15, as well as the possible canister-launched ICBMs, give North Korea an improved second-strike capability. The same is true for the KN-11, which is meant to be fired from a Gorae-class submarine. These new innovations prevent the U.S., South Korea, and Japan from tracking the weapons with satellites or eliminating them in a pre-emptive assault.

The ICBM revelations also send a message. “It’s intended to convey is that there are more ICBMs coming, more solid fuel missiles,” Jeffrey Lewis, the director of the East Asia Nonproliferation Program in the James Martin Center for Nonproliferation Studies at the Middlebury Institute of International Studies at Monterey, told reporters.

“It certainly appears to be a message to the United States that they’re capable of threatening the U.S. homeland. That’s certainly their objective,” Adam Mount, senior fellow at the Center for American Progress, told CNN. Pyongyang has threatened the U.S. and expressed a desire for a reliable ICBM on numerous occasions. The ICBM developments move North Korea closer to realizing its goal of being able to hit the U.S. with a nuclear-tipped missile.

The North also revealed several improved extended-range scuds, as well as new anti-ship missiles. Like the others in the parade, these missiles were also affixed to TELs.