Why Won't Pakistan Act against the Haqqani Network? 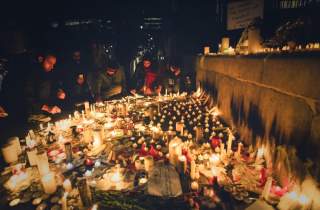 The Pakistani Taliban’s brutal attack at an Army Public School in 2014, which killed more than 140 children, forced the country’s powerful military into launching a massive military operation against militants based in the tribal regions along the Afghan border. While for years, the Pakistani leadership is known to have patronized and sheltered various militant groups for different security related reasons, to everyone’s surprise, this operation promised to decimate all terrorist groups:  “All foreign fighters and local terrorists will be wiped out without any exception,” including the Haqqani network, said the military.

On November 5, 2014, Lt. Gen. Joseph Anderson, a senior commander for U.S. and NATO forces in Afghanistan, in a Pentagon hosted press conference noted that Pakistan’s military operation in the country’s tribal areas had “fractured” the Haqqani network and the group’s ability to strike in Afghanistan had been reduced significantly. “They are fractured. They are fractured like the Taliban is. That's based pretty much on the Pakistan [operations] in North Waziristan this entire summer-fall,” Anderson said.

However this apparent major doctrinal shift in Pakistan’s strategic security and defense policy has proved another hoax. Before the operation, Pakistan Army’s media wing in a statement said that this will be an indiscriminate operation and when the soldiers “go there, they will eliminate everyone,” and by that the spokesperson meant “any terrorist who is on the soil of Pakistan right now within the area of operation.”

The military operation named Zarb-e-Azb, as announced has targeted all foreign or local militant groups except those who had left the region before the operation. Reportedly, the Haqqani network was tipped off before the start of the operation and moved its assets across the Durand Line, border dividing Afghanistan and Pakistan.

Furthermore, the growing evidence suggests that Pakistan continues to support the Haqqani network and has not ceased its decade’s long policy of supporting various militant groups as part of its foreign policy. In the last two years, the “laying low” strategy of the Haqqani network has not only ensured its survival but has also enhanced its ability to launch attacks at will inside Afghanistan.

Reportedly, the bombing in Kabul a week ago which killed at least 64 people was attributed to the Haqqani network. Two days ago, the Afghan security forces foiled a terror plot in Kabul allegedly planned by the Haqqani network. The U.S. again has shown its concerns over Pakistan’s continues support and tolerance of the group: "We have consistently expressed our concerns at that the highest level of the government of Pakistan about their continued tolerance for Afghan Taliban groups, such as the Haqqani network, operating from Pakistani soil," the State Department said.

Moreover, the group has not only survived Pakistan’s military operation but has also become a unifying force among the Afghan Taliban, which became divided over the issue of leadership after the death of Mullah Umar. The divisions among the Taliban after Mullah Umar’s death had allowed the Islamic State to gain some foothold in Afghanistan. But the Haqqani leadership has been instrumental in reversing this phenomenon by closely collaborating with the Taliban and targeting the Islamic State affiliates unilaterally.

Amidst all these developments, the security situation in Afghanistan has worsened. The Taliban are stronger now than at any time since 2001. A year after withdrawal, the U. S. forces are back in Helmand region to contain the spiraling Taliban insurgency. The Afghan peace process, spearheaded by Afghanistan, Pakistan, the United States and China, has hit a dead end with President Ghani demanding an action from Islamabad against the Afghan Taliban leadership based in Pakistani cities. Over the last few months, the surging number of suicide attacks and roadside bombings around Kabul has threatened Ghani’s government as pressure from opposition parties have mounted. The Afghan president’s reconciliation policy towards Pakistan has clearly not made any significant difference as far as the peace and stability in Afghanistan is concerned.

Pakistan’s commitments to sincerely support the Afghan peace process lack substance. Beyond the rhetoric of tackling insurgency for regional peace, Pakistan has persistently continued its decade long policy of using proxy groups to project its power in Afghanistan. The National Security Archive at the George Washington University recently published a cache of unclassified documents which claim that “A large majority of the Haqqani Network (HQN) funding comes from the Quetta, Pakistan-based Taliban leadership.”

The Indian involvement in Afghanistan makes Pakistan panic. In contrast to Pakistan’s support base which mainly comprises of non-state actors, India enjoys considerable public support in Afghanistan. This reality has been one of the major factors behind Pakistan policy of supporting proxies in its neighborhood even at the cost of its own security and stability. In order to legitimize its agenda in Afghanistan vis-à-vis India, Pakistan has ensured that the “actual” threat, that New Delhi may pose towards Pakistan, which in reality is very marginal, should be supplemented by the overwhelming perception. This, consequently, has led Pakistan to view Afghanistan as its own backyard.

While on many occasions Pakistan has claimed that it possesses significant influence over the Haqqani network, it has not forced the group into the peace talks. Some analysts have even argued that the Haqqani network and the Afghan Taliban understand Pakistan’s security interests in Afghanistan and deal with the latter’s security agencies on their own terms. This argument holds truth as Pakistan has failed to bring the Taliban and the Haqqanis at the peace table.

The paradigm shift, which Pakistan propagated under the guise of targeting all militants in its military operation that began two years ago, was just a tactical change while the decade’s long policy of making distinctions between good and bad militants remains in place.  This policy, in the long run, will not only hurt the regional security but will also undermine Pakistan’s own security and economic interests.