Why Robert C. O'Brien Would Be an Excellent Choice for Secretary of the Navy 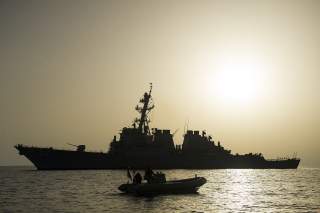 Over at the Washington Examiner, it seems clear the Trump administration is considering a smart move that will further one of the president’s most important national security promises to the American people: rebuilding the U.S. Navy.

The possible nomination of Robert C. O’Brien, someone who has the experience and drive to further the president’s national-security agenda, would be an excellent way to begin the process of massively upgrading America’s navy—especially as Trump pushes forward plans to build a 350-ship fleet.

Having known O’Brien for many years and worked with him in various capacities—from when I served as editor-in-chief of the Diplomat and executive editor of the National Interest, as well as during the Ted Cruz campaign—I can speak directly to his experience for this vital post.

Specifically, I would offer five important reasons why O’Brien should not only be considered vigorously for the post, but should ultimately be nominated by President Trump.

1. He Aligns Perfectly with Trump’s Vision for a Stronger Navy:

President Trump has been clear over the last several months that one of his biggest objectives in rebuilding the U.S. military is it to ensure our navy has the tools it needs with an appropriate amount of ships along with the modernized equipment to defend the world’s oceans, deter America’s enemies and see that commerce flows freely.

O’Brien has not only been calling for a larger, 350-ship U.S. Navy for close to a decade, but is a sought out expert on U.S. naval operations. In a widely cited piece in Politico back in 2015, he saw the dangers ahead for America’s sailors:

We have a crisis in the fleet . . . Today, at 284 warships, the United States Navy’s fleet is the smallest since World War I. But even that number probably overstates the Navy’s true capability: The Pentagon recently changed the rules by which it counts active warships and if you apply the traditional and more stringent method, the Navy has but 274 warships. Given sequestration, the fleet will continue to decline.

Not only does O’Brien understand the challenge of rebuilding the fleet, and the numbers needed to sustain its dominance on the water, but he has clearly been thinking through these issues for years. As his piece in Politico demonstrated, he has a clear plan of action to take the navy into the future, and he understands the potential foes Washington could face in years ahead.

2. A Strong Record of Service—But No Creature of Washington:

While certainly a known quantity in U.S. national-security circles, O’Brien is not a creature of Washington per se.

His day job is as a lawyer at a highly successful law firm in California. O’Brien’s expertise was sought out by President George W. Bush to serve as a U.S. representative to the sixtieth session of the United Nations General Assembly. Earlier in his career, O’Brien was also a senior legal officer with the United Nations Security Council in Geneva, Switzerland.

While naval experts are always battling over which ship class, weapons platform or strategy makes the most sense, O’Brien is someone who would approach the job of navy secretary from a pragmatic perspective. His goal would be the to offer a strategy to build up the fleet’s capabilities, and not pay fealty to one special ship or past plan of action. And, considering the challenges America and its allies face on the water from China, Russia, Iran and beyond, a dose of pragmatism is sorely needed.

Given his service on four different presidential campaigns—Romney 2008 and 2012, Scott Walker, and Ted Cruz—people have sought out Robert O’Brien not only for his wise counsel, but for his ability to build bridges and work with those who might not always share the same vision. He is someone who always listens to all sides of an argument, seeks out the best minds for counsel and advice, and has sound judgment whether or not to act on such advice.

5. A Man of Vision and Foresight:

It seems clear the new administration is very worried about the rise of China, specifically the dangers America and its allies face as Beijing’s armed forces attempt to deter Washington from reinforcing allies or intervening if a crisis ever took hold over Taiwan or in waterways nears China like the East or South China Seas. Here, O’Brien was one of the first voices to point out the danger Washington faces, many years before such topic were in vogue—for example, from 2011:

A key goal of China’s maritime build-up is access denial. While multifaceted, China is building its access denial strategy around two backbone platforms: the DF-21D (Dong Feng) anti-ship ballistic missile (ASBM), described as a ‘Carrier Killer,’ and an ever expanding and modern attack submarine fleet. US Navy Pacific Commander Adm. Robert F. Willard has characterized the DF-21D as already having reached the Initial Operational Capability stage of development, meaning that they are operable, but not yet necessarily deployable. Taiwan sources report that China has already deployed at least 20 ASBMs. Whether deployed now or in the near future, the US Navy believes China already has the space-based intelligence, surveillance and reconnaissance, command and control structure, and ground processing capabilities necessary to support DF-21D employment. China also employs an array of non-space based sensors and surveillance assets capable of providing the targeting information necessary to employ the DF-21D.

While there are clearly many people who would be excellent picks for this vital post, including Randy Forbes and many others whom I have praised and have worked with closely, Robert O’Brien brings a package of skills and expertise that President Trump should seriously consider. America’s navy would only prosper under Robert O’Brien.

Harry J. Kazianis (@grecianformula) is Director of Defense Studies at The Center for the National Interest and Fellow for National Security Affairs at the Potomac Foundation. The views expressed here are his own and do not represent any institutional endorsement.