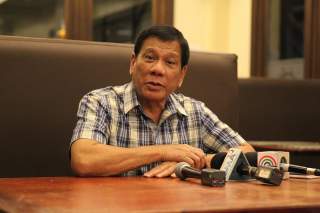 President Rodrigo Duterte’s may have rowed back from his shock decision to “separate” from the United States announced during his recent visit to China, but the bizarre episode reinforces the picture of a very different Philippine leader who proudly calls himself a socialist and has had long-standing linkages to the Communist Party of the Philippines (CPP).

Leaving aside the 71-year-old leader’s foul mouth and crude and often erratic behavior, his early political education helps explain his anti-US stance, slamming President Barack Obama as the “son of a whore” and, to the bemusement of the Chinese, now distancing himself from Washington ‘in military and in economics’.

Up until then much of the criticism had centered on Duterte’s draconian, though internally-popular, law and order policy. But that’s now been overshadowed by his outreach to China, which has alarmed the country’s military and political elite to a degree that may prove destabilizing if it continues.

Outside of the Philippines, core ASEAN members have been left wondering whether a rough-edged former city mayor fully understands the strategic significance of turning his back on a treaty partner and the only power that can keep China in check in the contested South China Sea.

Of course, what has always made Duterte different is that while he was born into a political dynasty, the first president from Mindanao doesn’t consider himself part of the Philippine ruling class or the feudal system cemented in place by paternalism, private armies and decades of largesse.

Most of the Philippines’ 16 presidents have come from those powerful families. The only previous leaders without elitist credentials were Ramos, who could have transformed the Philippines if he had been allowed a second term, and actor Joseph Estrada, who was an unmitigated disaster.

The son of a Davao provincial governor, Duterte grew up with strong nationalistic sentiments that  became more pronounced during his university years when he studied political science under Jose Maria Sison, the long-exiled founder of the country’s communist movement.

Sison was to plant the seeds of resentment against perceived US imperialism, similar to that shared by many left-leaning activists and politicians who, although in a minority, were the driving force behind the enforced closure of Subic and Clark bases in the early 1990s.

The CPP has praised Duterte for his anti-American stand, saying in a recent statement that “the situation now exists for the forging of a patriotic alliance between his anti-US regime and the revolutionary and patriotic forces.” While Sison has often criticized Duterte for being arrogant and having a “loose mouth,” he also calls him a friend and says he is the one person who offers the best chance of ending the 47-year communist insurgency, one of three left in the world.

As a young lawyer, Duterte was a strong opponent of former dictator Ferdinand Marcos and  reportedly arranged meetings between foreign journalists and local communist leaders in the early 1980s when the CPP was in full flower.

When he was elected mayor of Davao city in early 1988, Duterte was quick to embrace the Alsa Masa, a rag-tag vigilante force formed to end a campaign of terror unleashed on the country’s third largest city by elements of the New People’s Army (NPA), the CPP’s armed wing. The Alsa Masa’s ‘godfather’ was Davao city police chief Franco Calida, whose younger brother, Jose, is the solicitor-general in Duterte’s Cabinet and a strong supporter of the President’s controversial anti-drug campaign.

By the time Duterte took office, roving bands of vigilantes, mostly criminals and NPA turn-coats, had killed hundreds of suspected NPA operatives, but if the mayor’s open backing of the Alsa Masa seemed to be paradoxical, his motives may have been very different from Calida’s. Former NDF members suspect he was actually supporting the CPP central committee in its ongoing purge of urban revolutionaries, who had deviated from the party’s Maoist line and were bringing the CPP into disrepute.

Law and order was always a Duterte priority, however. When he was reappointed mayor in 2001, after a two-year stint in Congress, the now-moribund Alsa Masa was replaced by the mysterious Davao Death Squad (DDS). In the years that followed, the DDS was implicated in 1,400 vigilante-style executions of mostly petty criminals, which led to a vast improvement in public security in a city that was once known as the murder capital of the Philippines.

Duterte’s distaste for the US was further fuelled in May 2002 when US federal agents allegedly aided in the escape of American ‘treasure hunter’ Michael Meiring after he accidentally triggered an explosive device in his Davao hotel room.

The president-to-be was later denied a US visa and has since adamantly opposed joint US–Philippine  military exercises and operations in Mindanao, including—apparently—an American effort in 2013 to station drones at Davao airport.

While the US has criticized Duterte’s latest killing spree, it has wisely avoided being drawn into a more serious confrontation. The president has modified his position since returning to Manila, saying he didn’t intend to sever relations.

But it hardly matches what Washington likes to call an ‘iron-clad’ relationship. The question now is whether military and vested political and business interests will allow such an uncertain situation to continue in a country that, as Duterte well knows, generally idolizes its former colonial master.