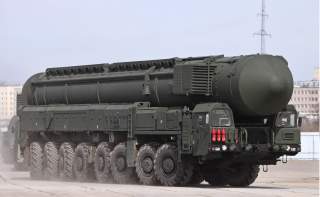 During a March 1 speech, Russian President Vladimir Putin rolled out several new novel strategic nuclear weapons—some of which might seem outlandish. Among these weapons are the Status-6 nuclear-powered intercontinental range torpedo and a new nuclear-powered nuclear-tipped cruise missile. While the Russians seem to genuinely believe that they need ways to counter the United States’ missile defense system, there are easier ways to defeat those nascent defenses. Is there another factor driving Russia’s new developments?

Part of the reason the Kremlin is pursuing these new weapons—apart from genuine concern about American missile defenses—is the Russian military industrial complex, which is perpetually in search of new projects. In the case of these weapons, the Russian defense and nuclear energy industries played a large role in convincing the Kremlin to proceed—and by some estimates, Russian industry might have had the dominant role.

“As here in the U.S.—indeed, everywhere—that’s tough to break out,” Olya Oliker, senior adviser and director of the Russia and Eurasia Program at the Center for Strategic and International Studies, told The National Interest.

“Everyone always looks to justify their program with whatever the threat is. In many, if not most cases, they truly believe that their pet program is the right response to the threat. At the same time, services and individuals have relationships with defense industry, which also feeds into this dynamic.”

Michael Kofman, a senior research scientist specializing in Russian military affairs at the Center for Naval Analyses, suggested the almost half the impetus for new projects such as Status-6 and the nuclear-tipped cruise missile came from industry. The reasons are simple.

“Keeping capacity alive. Not letting top talent die out,” Kofman told The National Interest. “That means the feeding defense industry and S&T [science and technology]. Even if you don’t really have missions.”

Nikolai Sokov, a senior fellow at the James Martin Center for Nonproliferation Studies at Middlebury Institute of International Studies at Monterey—a former Soviet and Russian nuclear arms control negotiator—said that the Russian and Soviet system before it was complex.

“The defense industry always wants to push new big contracts and always comes to the military saying, see what we could do, just give us money. It’s the same here (the entire MD [missile defense] deployment story is a testimony – the system clearly needs more R&D),” Sokov told The National Interest.

“But then there are checks on that – Congress first of all. Sometimes it does the job of screening new toys, sometimes it does not, depending on the variety of reasons (again, with MD it’s political and ideological reasons that made serious debate on the advisability of MD deployment next to impossible). It’s the same in Russia, but there the system is more centralized and the government—Putin, but not just him—are ready to buy into new toys. They have displayed a propensity to fund a lot of programs, even though these could be judged unnecessary or too expensive given budget constraints; they’d rather extend deadlines and keep funding at lower levels than refuse a program.”

The situation in Russia has started to improve somewhat—but there are still very few checks on the Russian defense industry.

“Now, the MOD [Ministry of Defense] has become better with controlling costs. They really bargain with the industry, so they are more successful with keeping costs more reasonable than is the case with the Pentagon—one of the reasons Russia can do so much with so much less money,” Sokov said. “But the military itself—services first and foremost—usually find it hard to refuse new toys. With checks beyond the military weak, you got what you see. One example is the rail-mobile Barguzin. I was truly surprised when they canceled it last year – a sign that there are at least some checks in the system.”

But the problem for Russia is the structure of its defense industry.

“The other side of the coin is the nature of the defense industry itself,” Sokov said. “It’s not just contracts for them, it’s also the fact that the production capacity largely inherited from the Soviet Union is still highly specialized. Not as specialized as was the case then, but nonetheless… In the absence of defense contracts, many enterprises would have to be shut down. Thus, defense contracts are also a means to keep plants open. This is why Putin’s statement about the need to increase the share of non-defense production at defense enterprises to 30 percent is so significant—no one has paid attention, though—they are still trying to force defense enterprises to diversify and become less reliant on defense budget money.”

But Russia does have a genuine need not only to reform its defense industry but also to reequip its forces to replace its Soviet-era hardware. “All this, of course, is against the background of the genuine need to reform and retool,” Sovkov said. “Russia does need a completely new army and has started down that path pretty late – about a decade ago—[former Russian Defense Minister Anatoly] Serduykov’s reforms, no matter how badly they now talk about him in Russia. So, there is a genuine need in new weapons. It’s just that, in my view, they are going overboard. This especially concerns futuristic projects.”