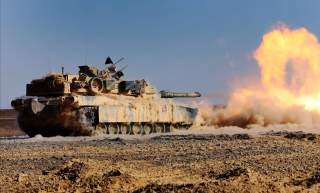 The latest Abrams variant is an upgrade package, the M1A2SEP V3. Many of its features are practical rather than sexy: upgraded computers, and a new Auxiliary Power Unit (APU) that allows the Abrams to keep its sophisticated systems running while the engine is off, improving the fuel efficiency of the Abram’s notoriously thirsty turbine engines. Maintainability is improved with modular, replaceable cabling.