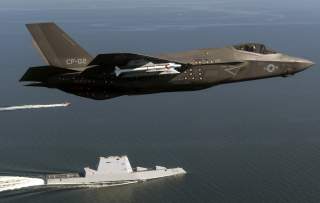 “It's really neat to see this aircraft out there with other aircraft,” Rear Adm. Dale Horan, director of the U.S. Navy F-35C Fleet Integration Office, said. “We haven't done that before. Previously, all the CQ [carrier qualification] evolutions have just been F-35s."

Unlike previous F-35C CQ events, this deployment featured other aircraft that would normally be found onboard an operational carrier at sea during a real mission. Moreover, the deployment shows that the F-35C is starting to mature. Naval aviators made use of the new Joint Precision Approach and Landing System (JPALS), which is a GPS-based all-weather landing system, and the aircraft’s foldable wings. Maintainer, meanwhile, made use of the much-maligned Autonomic Logistic Information System (ALIS), which is a computer-based logistical tool used to manage F-35 maintenance, supplies, mission planning etc.

While there are still bugs to be worked out, the F-35C is making a good first impression with the naval aviators who will fly it into battle in the future. "My original platform is the Hornet, which I've flown for the past three years," Lt. Nick Rezendes, an F-35C pilot attached to VFA 101, said. "I wanted to switch to flying the Navy's newest aircraft, and now that I have, I wouldn't mind sticking with it for the rest of my career."

With its stealth and sensors, the F-35C will play an increasingly important role in the fleet as the Navy starts to focus on high-end warfare against Russia and China.

"It's pretty clear that this aircraft is the Navy's future for strike warfare," Horan said. "It's shaping up to be a fantastic aircraft. As with any program, there are always complexities in getting it fielded, but we are working through those. This aircraft is very capable and it'll be really neat to watch it develop."