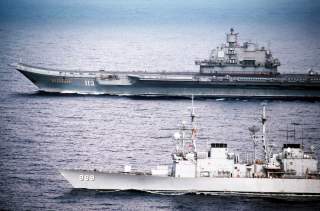 The aircraft carrier Admiral Kuznetsov is the biggest ship in the Russian navy and the most visible symbol of the Kremlin’s military power. This October, she will travel to the Mediterranean and carry out air strikes in Syria, according to a report from the Moscow-based Tass news agency.

There is a general rule for news about Russian warships. Like most things in life — don’t believe it until you see it. The first problem is that the Tass report, which reverberated throughout the Russian and Western press, relied on a single anonymous “military-diplomatic source.”

Nor is this the first time rumors have spread about the Admiral Kuznetsovgoing to war in Syria. The Russian navy denied a 2015 report which claimed as much.

But this is not to say you should totally disbelieve it, either. Recent activity surrounding the Admiral Kuznetsov may indicate an upcoming combat deployment.

First, here are several reasons to doubt it.

Admiral Kuznetsov has never seen combat, nor would she be of much practical military use. The 55,000-ton carrier has a bow ramp, not steam catapults, requiring her aircraft to shed weight before taking off. This means her planes will go into combat with less fuel or bombs than the ground-based fighters Russia has already deployed to Syria.

This is on purpose. The Soviet Union designed Admiral Kuznetsov as a “heavy aircraft-carrying missile cruiser” to support a surface battle fleet, foreign policy writer Taylor Marvin pointed out.

This makes her less flexible than U.S. supercarriers, and it’s the reason she packs anti-ship missiles for sinking other vessels, but cannot launch fully gassed-up strike planes with heavy bomb loads suitable for attacking targets on land.

Worse, the conventionally-powered Admiral Kuznetsov has problems. Poor maintenance, defective steam turbines and shoddy boilers means she’s unreliable — which is why Russia sends an ocean-going tug with her, wherever she goes.

A video of one of these tugs hauling the carrier in bad weather during a 2012 voyage appeared last year. It has an utterly awesome and appropriately Russian soundtrack.

“Carrier operations, particularly high-tempo strike missions, are an extremely complex logistical and operational dance, with lethal consequences for mistakes,” Marvin wrote. “Since the USSR and Russia has had little opportunity to build these skills, and none to test them in combat, any strike missions from the Kuznetsov would be limited and mostly for show.”

Russia would take a big risk … for not much gain. This doesn’t mean the Kremlin wouldn’t take the risk. There is circumstantial evidence to suggest — although in a speculative fashion — that the Russians may be preparing to do just that.

For one, Admiral Kuznetsov is planning a voyage to the Mediterranean this fall. “It is true. There is such a plan,” Adm. Vladimir Komoyedov, chairman of the State Duma defense committee, told Tass on June 28.

Su-33 and Su-25 jets recently landed on the flattop, last spotted sailing in the Barents Sea. MiG-29Ks — a carrier-launched version of the muscular, multi-role Fulcrum — will arrive “in the coming days,” according to a July 4 report by Interfax.

The news agency reported that the arrivals are in preparation for a “long hike” planned “roughly in the middle of October.”

The MiG-29K and its two-seater KUB variant are Soviet-era designs revived for the Indian Navy after it purchased the Kiev-class flattop Admiral Gorshkov — renamed INS Vikramaditya — in 2004. However, the planes themselves are brand new, pack advanced avionics and can drop precision-guided bombs.

But it gets weirder.

Russia went to war in Syria in September 2015. That month,Admiral Kuznetsov was completing a three-month maintenance stint near Murmansk.

Then in October, she appeared in the Barents Sea … for combat training.

That’s unusual, because the Russian aircraft carrier is a snowbird; she heads south late in the year. More specifically, she sails into the Mediterranean, which she did during her four previous deployments — all during winter.

October is not winter. But the Barents Sea and the carrier’s home port at Severomorsk are beyond the Arctic Circle, where flight operations are particularly dangerous beginning in mid-October due to the polar night, when there is little light.

Sergei Ishchenko, a military commentator and former navy captain, found that perplexing. “Only extraordinary circumstances could have forced training flights from the carrier during the least suitable time of the year,” he wrote for the website Svobodnaya Pressa.

“It’s obvious that the war in Syria is that circumstance.”

Russia might not have a chance to deploy its carrier in combat again for awhile. In early 2017, Admiral Kuznetsov will head into dry dock for a two-year overhaul shortly after she returns from the Mediterranean. The war may be over by the time her repairs are done, giving the Kremlin a tiny window to signal military prowess with its flattop.

More curious is what’s happening with the MiG-29Ks.

These warplanes train at a runway with a ski-ramp in Yeysk, Russia, along the Sea of Azov. The Kremlin built this facility in 2012 as an alternative to a similar ramp runway in Nitka, Crimea — then part of Ukraine — which Russia leased. Russia captured Nitka during its February 2014 invasion, but the facility is apparently not suitable for MiG-29Ks.

And according to Ishchenko, the MiG-29K unit — the 100th Shipborne Fighter Aviation Regiment — was not fully trained as of January 2016. Admiral Kuznetsov is useless without those multi-role fighters and their pilots. “Victory in that war demands actual, not potential, power,” Ischenko wrote. “And theAdmiral Kuznetsov still lacks its full combat power.”

Hence the reason why the carrier is back in the Barents Sea for the second time since last October, now with MiG-29Ks on the way … on a crash course for an upcoming combat mission.

At least, that’s the theory. We’ll find out in a few months.