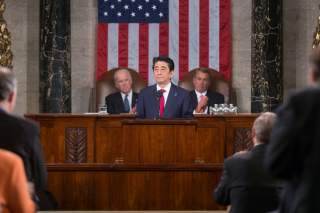 Strolling through the stately ivory edifice of the USS Arizona Memorial in Hawaii, one inevitably catches an unmistakable whiff of petroleum riding the halcyon ocean breeze of the Pacific. The waft of petroleum arises from the tears of Arizona, the driblets of oil leaking from the USS Arizona since it was sunk by the Japanese bombardment on December 7, 1941. Here, time has stopped indefinitely, and the memorial offers visitors a silent, yet arresting reminder of the geopolitical struggle that once unfolded across the Pacific.

This week, Japanese prime minister Shinzo Abe will become the nation’s first incumbent leader to visit this memorial along with the outgoing U.S. president Barack Obama. Naturally, expectations have grown high on both sides of the Pacific for mutual reconciliation following Obama’s Hiroshima visit earlier this year. Apart from such obvious symbolism, Abe’s upcoming visit will be a milestone in the evolution of the longest bilateral alliance since the 1648 Peace of Westphalia. Because the memories of Pearl Harbor have largely shaped U.S.-Japan relations since 1945, he has a historic opportunity to consolidate Tokyo’s emerging role in the alliance by parting with the legacies of the past.

The Specter of Pearl Harbor:

In fact, Pearl Harbor is in many ways the origin of the U.S.-Japan alliance forged against the backdrop of Imperial Japan’s defeat. Prior to 1941, the two countries were bitter geopolitical rivals vying for the control of the Western Pacific. In fact, when the pro-U.S. Provisional Government of Hawaii was established in 1893, Imperial Japan intervened by sending warships to Pearl Harbor in protest. Given the two countries’ imperial ambitions, the Pacific War was all but inevitable and ended their geopolitical competition with Japan’s unconditional surrender to the status of Washington’s de facto protectorate ushered by General Douglas MacArthur’s occupation project of democratization and demilitarization. As the Korean War threatened the future of the democratic, yet emasculated postwar Japan, Washington’s solution was one of compromise: transformation of the defeated nation into Asia’s anti-communist bulwark by sponsoring Tokyo’s partial remilitarization under a military alliance.

Washington’s about-face was not without controversy. In fact, deep seated suspicion of Japan’s militarist revival long persisted in the minds of many Americans. No less a figure than the former U.S. ambassador to Japan, Edwin O. Reischauer, lamented the fragile foundation of the fledgling alliance in 1953: “During the twentieth century as a whole, no country has more consistently regarded itself as in essential conflict with the United States than has Japan, and no country has been more uniformly looked upon as a potential enemy by Americans, the burden of proof, perhaps, should rest on those who assume Japanese-American friendship, rather than those who expect the contrary.” Even almost half a century after Reischauer’s lamentation, Lt. General Henry Stackpole, the then-commander of U.S. Marines in Okinawa, once described the alliance as the “cork in the bottle” of Japan’s potential militarist atavism while other skeptics like George Friedman prognosticated that Washington and Tokyo would once again be on a collision course absent the common Soviet threat.

These skeptics’ charges turned out to be mere alarmist hyperbole. When former prime minister Shigeru Yoshida, the architect of the eponymous Yoshida Doctrine, signed the U.S.-Japan security treaty in San Francisco in 1951, he astutely recognized the strategic advantage of the bilateral arrangement in focusing on economic recovery even at the expense of national pride. Yet, he largely failed to foresee its long-term effects. The fundamental structure of Japan’s security dependence on the U.S. became ossified over time, shaping the trajectory of Tokyo’s national security strategy. In a country where change is hard to come by without external pressure, this structure has largely earned the default status in Japan’s national security discourse. In other words, the alliance has always been justified, for the only price postwar Japan has paid is essentially national pride in exchange for a security guarantee underwritten by the world’s mightiest military.

Since taking office in December 2012, Abe has proven himself as an iconoclast within Japan’s national security establishment and has been accelerating Tokyo’s security normalization by scraping off various postwar restrictions imposed on the country’s national security functions. His efforts culminated in the historic 2015 legislative reform expanding Japan’s collective security role as well as arms exports. These changes have recently resulted in Tokyo’s latest decision to allow its peacekeeping troops deployed in war-torn South Sudan to use force to protect U.N. forces under attack.

The upshot is the gradual demise of the mercantilist Yoshida Doctrine increasingly replaced by the Abe Doctrine founded on “a more assertive, high-profile, and high-risk, foreign and security policy.” In fact, the emergence of Abe’s eponymous doctrine is most palpable in Tokyo’s recent foreign policy track record. As soon as president Donald Trump won the historic 2016 election, Abe became the first world leader to secure a meeting with the then-president-elect at Trump Tower, even bypassing the incumbent U.S. leader. Earlier this month, he held a historic summit with Russian president Vladimir Putin in Japan and agreed to advance bilateral cooperation ranging from economic to even security despite the lingering territorial dispute and Washington’s frequent objections. Ironically, the Abe Doctrine was on full display as Washington’s pivot to Asia largely withered on the vine, virtually abandoning its signature policies, such as the Trans-Pacific Partnership.

As Japan’s global influence expands in earnest, Abe’s upcoming visit to Pearl Harbor will provide him with an opportunity to formalize the country’s emerging role in the alliance. Hawaii is located on the western edge of Abe’s conception of Asia’s Democratic Security Diamond whose other points include Japan, Australia, and India. Abe’s security diamond encompasses the South China Sea, one of the world’s most volatile waters constantly threatened by China’s provocative actions, including its latest seizure of a U.S. Navy drone. Given his record-breaking political longevity, Abe’s leadership will be crucial to ensuring the peace and stability of the Indo-Pacific for years to come. His Pearl Harbor visit could send Washington a powerful message on Tokyo’s growing willingness to play a proactive security role on a global scale.

75 years after the day of infamy, peace now prevails over the Pacific. This is an accomplishment firmly anchored in the 65 year-old U.S.-Japan alliance that evolved from a Cold War expedient to a globalizing maritime alliance founded upon shared values, interests, and activities. Since 1945, Washington’s global alliance arrangements have contributed to the stabilization of the Pacific and the Atlantic, virtually leaving only the Indo-Pacific contested by great power politics. As Trump settles in the Oval Office next month, he will find an Asian ally ready to play a proactive role in making Washington’s pivot to Asia great again.