Why Super Massive Armies Are Back 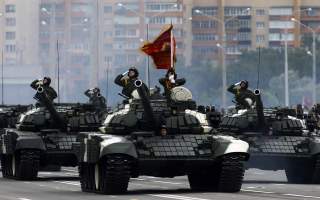 During the last 20 years, western militaries have followed a transformational agenda. Ever since the early 1990s, military “overweight” has been shed as direct military threats to western security and strategic interests evaporated. During the post-Cold War era, and relying on the so-called “Revolution in Military Affairs” (RMA), military transformation became a tool to redefine war and the guidelines for developing national armed forces in the West. Trashing Army Corps, Divisions and Brigades, slashing fighter jets and Navy vessels and reducing military manpower by the millions, western militaries, particularly in Europe, have become more usable, but less resilient and capable to operate according to the demands of large-scale high-intensity warfighting. This is particularly true if one takes the rising military capabilities of China and Russia as a yardstick.

The recent events in the East and South China seas, as well as Russia's actions in Ukraine and Syria, have all surprised western strategic decision-makers. After two decades of outright western (read: American) defense policy supremacy, peer competitors have emerged, and they have started to challenge the western-defined post-Cold War era international security architecture. What was expected to be all about common security threats in an interdependent world with a non-zero-sum approach to security, has turned into fierce competition between western states on the one hand and China and Russia on the other. And in-between a range of lesser, but still notable, actors are causing more problems than used to be the case during the 1990s and the following decade.

What has been particularly significant in the latest development of events has been the speed with which the West is losing its edge on international security affairs. China’s “new” artificial islands and the militarization of the East and South China seas, to be followed by rising competition in the Indian Ocean, and Russian annexation of Crimea and the following military operations in Eastern Ukraine and Syria have confronted western states during the last few years. In addition, Afghanistan is lost, Libya is failing, and Iran is on a roll in Iraq and Syria. These countries have all been at the epicenter of western security and defense policy agenda for years. Also, North Korea has been able to destabilize the western security approach with its million-man military forces, nuclear weapons and developing ICBM capability.

While all of the above has been happening during the last days, weeks, months and years, western states have been continuing on their transformational approach to military forces combined with the willingness to continue effectuating military savings and formulating austerity measures strangling western militaries and their capabilities. Particularly in Europe military forces are becoming dysfunctional, vis-à-vis the international security environment. Small professional forces - the size of few battalions, two brigades at the most - are not well equipped to deal with the rising tide of large-scale military risks and threats that are not only on the horizon but are already here.

Possibilities to develop sufficient, credible and real military capability with the preferred western transformational approach would require much more economic resources than European defense establishments have received during the post-Cold War era. What in the late 1990s was called a “capability gap” between the United States and Europe has during the last 15 years grown even wider. Only the U.S. has been able to finance its military transformation with sufficient R&D and procurement allocations in order to replace lost platforms and soldiers with high-tech capabilities. The only problem is that Iraq and Afghanistan have consumed American strategic thinking for the last 15 years and the notion of large-scale, high-end warfighting has not received required attention - on the policy, doctrinal or procurement levels.

In Europe, the outlook has been grim. At the same time as military forces have been slashed, professionalized and even miniaturized in most countries, defense expenditures have actually been decreased. European states have not compensated the decreasing size of their armed forces with increased defense investments on capabilities. On the contrary - according to NATO statistics, between 1990-2014 defense expenditures in NATO Europe decreased almost 20% based on 2010 prices. During the same timeframe, NATO accepted 13 new member-states - all in Europe. Thus the 2016 “hike” of European defense spending - 3,6% increase compared to the defense spending in 2015 - is a good start, but mostly symbolic in nature.

Without significant long-term increases in European states’ defense spending, there will not be a credible military capability on the continent to meet the challenges of the 2020s and 2030s. Sending small contingents of soldiers to out-of-area crisis-management or counter insurgency operations will not be sufficient in the foreseeable future. Nor will participation in counter-piracy or counter-terrorist operations.

Even if it is hard for many western political decision-makers to come to terms with the harsh realities of today’s and tomorrow’s military risks and threats, the West in general - and European states particularly - need to invest more in their militaries. Despite the facts that the transformational military logic could provide credible military capability - if financed properly - Europe still needs more military mass. Without combined-arms units capable of independent operations, supported by massed indirect fires, ground-based air defense, electronic warfare and precision strike capabilities, Western states in the “European theater” will not be up to the task of safeguarding against real military threats.

Spending more is a good start - as 25 years of underinvestment in military forces has eaten away much of the credibility that the tense security environment today would require. And building bigger forces is a good second step. Companies and battalions will not do, regarding indirect fires, mechanized offensive capability, electronic warfare, C2, ground-based air defense (GBAD) capability and a whole lot of other spheres of defense capability. Thirdly, within the NATO-context, European member-states should focus less on article 5 and what others (read: the U.S.) should do for us. Adopting an article 3 attitude, with increased defense financing, is the only way through which European states individually, and Europe as a whole, can be secure in the future. European states simply need more defense capability, period. Military mass is back.