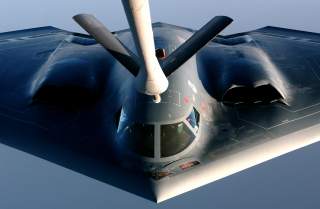 With the United States Air Force proposing to retire its fleet of Rockwell International B-1B Lancers and Northrop Grumman B-2 Spirits as the new Northrop Grumman B-21 Raider comes online, one intrepid B-2 pilot has started a campaign to save at least of the of 20 remaining stealth bombers for posterity.

“Recently it was announced that the B-2 Bomber will be retiring in the 2030s,” reads an anonymous GoFundMe campaign by a B-2 pilot to raise $1 billion to purchase a retired Spirit.

“I am establishing the B-2 Stealth Bomber Historic Society to preserve 1 of the 20 aircraft to share the aviation marvel with future generations.”

The Air Force formally announced its decision to eventually retire the B-1 and B-2 on Feb. 12 during the rollout of the fiscal year 2019 budget proposal.

“As part of our decisions presented in the FY19 President’s Budget, the Air Force will update the B-52 bomber fleet and fund development of replacement engines,”Air Force secretary Heather Wilson said. “We will also continue necessary B-1 and B-2 modifications to keep them relevant until the B-21s come on line.”

For the Air Force, while the B-2 remains its most capable bomber, it makes sense to retire the aging Spirit when the Raider comes online. There are only 20 remaining B-2s in the Air Force fleet. The small fleet size means that it takes the Air Force an inordinate amount of time, money and people to maintain the venerable jet—even without dealing with the aircraft’s stealth coatings.

Indeed, this fact is immediately apparent when one looks at the mission capable rates of the B-2 versus the B-52. The venerable B-52 has a mission availability rate of roughly 80 percent while Spirit languishes at roughly 50 percent. Basically, only 10 stealth bombers are flyable at any given time. Moreover, it is a pain to upgrade the B-2—and much of its electronics hardware is obsolete and manufacturers are reluctant to supply the small production batches needed to sustain the fleet.

Thus, given the difficulty and expense of keeping the B-2 in service—and recognizing that the B-21 will offer far greater capability—the Air Force has decided to rid itself of the Spirit in the 2030s. In its place, the Air Force will maintain a fleet of B-21s for the penetrating strike role and B-52s for the standoff cruise missile launch role. To that end, the B-52 will receive a host of upgrades including new and much more efficient engines.

“With an adequate sustainment and modernization focus, including new engines, the B-52 has a projected service life through 2050, remaining a key part of the bomber enterprise well into the future,” Gen. Robin Rand, Air Force Global Strike Command commander, said.

The bottom line for the Air Force is that it will retain its bomber force structure—just the mix of aircraft will change. “If the force structure we have proposed is supported by the Congress, bases that have bombers now will have bombers in the future,” Wilson said. “They will be B-52s and B-21s.”