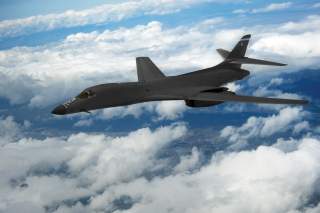 The U.S. Air Force’s Rockwell International B-1B Lancer strategic bomber has been on the front lines of America’s attempts to deter North Korea.

Unlike the venerable Boeing B-52 and the B-2 Spirit stealth bomber, the Lancer—though once a nuclear-capable aircraft—has been de-nuclearized and serves as a conventional long-range strike platform. Indeed, it is likely that the task of deterring North Korea has largely fallen to the B-1B because it is no longer a nuclear-capable aircraft—there is no chance that Pyongyang can mistake its operations as prelude to a preemptive nuclear strike.

The B-1B is a formidable weapons system. The massive aircraft has takeoff weight of 477,000lbs and has a payload of 75,000lbs with a range of over 5100 nautical miles or more with aerial refueling. The bomber can carry a vast array of weapons including some 84 500-pound or 24 2,000-pound GBU-31 Joint Direct Attack Munitions among a host of other armaments. More importantly, in the context of North Korea, the B-1B can carry up to 24 AGM-158A Joint Air-to-Surface Standoff Missiles (JASSM).

The 2250 lbs stealthy 230 nautical mile range JASSM and its longer-range 620 nautical mile range JASSM-ER derivative cruise missile are crucial for the B-1B in the event a war breaks out on the Korean peninsula. While the B-1B is a Mach 1.25 capable supersonic bomber with some frontal sector radar cross-section reduction, the Lancer is really only capable of penetrating into low to medium threat environments. Unlike the B-2, the B-1B relies on electronic warfare and high speed low level penetration to survive against enemy surface-to-air missiles system—if the enemy air defenses have not been neutralized.

Relying on Cold War-style low-level high speed penetration is inherently risky even against older air defense systems such as those possessed by North Korea. While conventional aircraft are vulnerable to missiles at medium to high altitude, at low attitudes jet are also vulnerable to anti-aircraft guns, man-portable air defenses and even small arms fire. It does not take much to cause catastrophic damage to an aircraft.

The advantage of the JASSM and the JASSM-ER is that it affords a conventional non-stealth aircraft a potent strike capability deep inside defended airspace without putting its crew at undue risk. The only downside to relying on standoff weapons like JASSM and JASSM-ER is that the targets have to either be pre-programmed or the crews are dependent on off board targeting. Thus, some sort of penetrating intelligence, surveillance reconnaissance or space-based asset would be needed to generate target coordinates. The range of the cruise missile far exceeds that of the B-1B’s sensors.

Ultimately, for taking on heavily defended targets, the B-1B is depended on cruise missiles, but remains a formidable weapon.