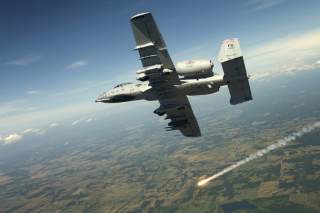 The U.S. Congress's recent decision to extend the service life of the A-10 Thunderbolt II reveals resistance to current thinking at the Pentagon.

A more powerful China and an increasingly assertive Russia have focused defense planners’ attention on the F-35 Joint Strike Fighter. But even as insurgencies continue in Afghanistan, Iraq, Libya, and Syria, the Pentagon seems intent on using the USAF’s version, the F-35A, to replace one of its most capable flying tools of counterinsurgency, the A-10C. Although an aging aircraft, the A-10 provides a more cost-effective and doctrinally suitable solution for fighting guerrillas. As the Air Force has lacked aircraft specific to counterinsurgency—other than its gunships—since the Vietnam War, now might be time to dedicate the A-10 to such missions.

Cost is one of the strongest rationales for using the A-10 in counterinsurgency. The latest version, the A-10C, costs $11,500 per flight hour; the F-35A costs $32,000. The A-10C also costs less to repair. And yet, for nearly triple the price, the F-35A adds little in capability: its stealth and sophisticated electronics are more advantageous for fighting peer competitors with high-altitude air defenses. But as the USAF looks to extend the service life of other aircraft with upgrade packages, it would be very simple to keep the A-10C on counterinsurgency duty. The plane has already entered the 21st century—its airstrikes are now possible with a click on a tablet. In contrast, while the F-35A does have a cannon, it lacks the volume of ammunition on the A-10C. The newer jet is insufficiently armored to hazard at low altitude, while the A-10 was designed to weather dense air defenses while strafing Soviet tanks. The A-10 is also an effective psychological weapon, inducing panic among , and evoking strong affection among friendlies.

Switching to the F-35 for counterinsurgent operations also presents a direct violation of proven theory. David Galula’s renowned 1964 work Counterinsurgency Warfare: Theory and Practice outlines the problem. His description of an optimal counterinsurgent force provides a sharp contrast to the concept of the F-35: “as long as the insurgent has failed to build a powerful regular army, the counterinsurgency has little use for heavy, sophisticated forces designed for conventional warfare.” His description of the ideal counterinsurgency air force then describes attributes commonly applied to the A-10: “one needs ground support and observation planes of slow speed, high endurance, great firepower, and protection against small-arms ground fire.” While today’s aircraft and munitions technologies are quite different from those of Galula’s era, the qualities he stresses still characterize the A-10C as extremely capable.

As many of America’s future conflicts will likely be related to fighting non-state actors and insurgency forces like those of ISIS, a counterinsurgent-specific aircraft will prove very useful. The F-35 will likely prove capable in air-to-air battles and penetrating bombing missions. The A-10 is much cheaper, more resilient, and more doctrinally suitable for counterinsurgency. Keeping both planes in the inventory would thus provide the USAF with two ground-attack toolsets: the F-35A for symmetrical opponents, and the A-10C for asymmetrical ones.

This piece first appeared on the Atlantic Council’s website here.