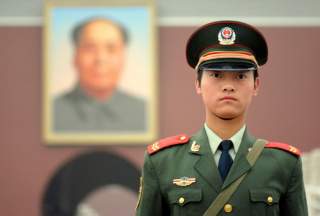 Many commentators and readers of The Economist keenly await their weekly dose of KAL.The 16 July 2016 cartoon didn’t disappoint. A claimant hoists the Permanent Court of Arbitration’s South China Sea ruling aloft while the Chinese dragon dumps a load of rocks and topsoil on him, transforming him into a reclaimed facility and replacing the ruling with a more ominous sign ‘Welcome to the New China’. It sums up, with KAL’s usual mordancy, China’s response to the Arbitral Tribunal’s South China Sea determination: China will make its own rules when it comes to defining and protecting its strategic interests.

The Tribunal’s arbitration award in favour of The Philippines is both legally and geo-strategically significant, as Don Rothwell pointed out in his elegantly argued post. And The Economist’s daily blog commented, ‘it is also the biggest setback so far to China’s challenge to America’s influence in East Asia’. The early indications are that China will tough it out, impugning the independence and integrity of the five judges of the Permanent Court of Arbitration and reaffirming the entirety of its South China Sea claim.

But to argue that, by flouting the ruling, China will be elevating brute force over international law as the arbiter of disputes, as did The Economist, at once misunderstands the dynamics of China’s position and endorses a more robust demonstration of forcefavoured by the US Navy and some Australian commentators (such as the Opposition Defence spokesman, Senator Steven Conroy). In seeking to generate a strategic buffer in the South China Sea and to consolidate its military footholds there, China is doing exactly what any rising power seeks to do—stare down its rivals and marginalise any local opposition.

That, of course, is precisely what the Monroe Doctrine, enunciated almost two centuries ago but still informing US strategic policy today, achieved in securing US dominance over the western hemisphere. China, however, isn’t promoting its own version of the Monroe Doctrine but is rather continuing an approach more consistent with the strategy of Admiral Zheng He (Cheng Ho) in the 15th century and the more contemporary One Belt One Road policy.

It’s a strategic and political impossibility for China meekly to accept the Court of Arbitration’s ruling and withdraw its claim. Had that at any time been under consideration, China would have joined proceedings in The Hague and argued its case. That’s not to suggest, however, that China lacks options.

First, while continuing to ignore the ruling and proceeding with the construction of artificial installations in the South China Sea, China will play for time. The G20 meeting to be held in Hangzhou in early September is an important opportunity for China to showcase its power, status and wealth. China will play down the significance of both the South China Sea issue and the ruling at least until it concludes a successful heads of government meeting. And China will certainly exploit Philippines President Duterte’s offer of further consultations as proof that the court ruling isn’t the last word on the matter.

Second, China will continue to challenge and rebuff what it sees as confected US interests in the South China Sea. China’s claim, and those of the other claimants, have been alive for almost 70 years. But it was Secretary of State Clinton’s remarks at the 2010 ASEAN Regional Forum in Hanoi that identified US interests in the South China Sea. China will continue to portray the US as a self-interested latecomer to the issue.

Third, China will continue to engage bilaterally with each of the claimants, seeking either to buy them off through promises of development funding (the One Belt approach) while using concessions by one claimant to manipulate the options of the others. China’s neighborhood diplomacy is already paying dividends, as the carefully drafted 24 July 2016 ASEAN Foreign Ministers’ Communiqué reference to the South China Sea reflects.

Fourth, China will consolidate its land reclamations as faits accomplis, and while the declaration of an ADIZ may be unlikely in the short term (it wouldn’t be helpful in the lead-up to the G20 meeting), such a declaration remains a definite option should the China–ASEAN discussions fail to proceed smoothly. And, of course, a naval show of force by the US and others to exercise freedom of navigation rights could precipitate exactly the outcome that regional countries wish to avoid.

China’s regional diplomatic skills are well developed. Its push/pull maneuver/manipulate techniques are both honed and practised, and China is working away at creating its own set of regional agreements that will provide an interesting contrast to the ‘rules-based international order’ favored by the US and its allies, particularly Australia. Wu Xinbo’s recent International Affairs article makes for interesting reading in this regard.

Foreign Minister Julie Bishop is absolutely correct in emphasising diplomacy and negotiation as the most effective way forward in the current South China Sea dispute. But she needs to recognise that the term ‘rules based international order’ is tantamount to code for ‘US-legitimized international order’—a concept that China is happy to ignore. As China, India and Russia—amongst others—continue to assert their strategic ambitions, the legitimacy of the post-WW2 international order can only erode further. China wants to be a rules-creator as well as, perhaps, a rules-observer. The issue here isn’t one of accommodation or appeasement towards China’s regional and global aspirations, but rather acceptance of China for what it has become—a major power in its own right. To deny China that role would be to create an unhappy dragon. We should all take care.