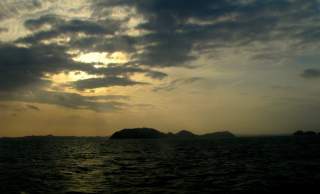 Of all the “strategic” challenges confronting the Asia-Pacific region, none is as underrated as the destruction of the marine ecosystem. The South China Sea’s status as a critical waterway draws attention away from the fact that littoral Southeast Asia is one of the world’s most diverse global marine bio-systems, hosting 76 percent of the world’s coral species and 37 percent of reef-fish species. Over the past two decades there have been documented instances of Chinese fishermen in the Spratly Islands and surrounding waters indulging in large-scale illegal capture of fish using cyanide, dynamite, and detonating cords. The wide range of sea life targeted has included endangered sea turtles, giant clams, giant oysters, sharks, eels, and large pieces of highly ornamental coral.

In the wake of a UN tribunal’s quashing of Beijing’s claim to historic rights in the South China Sea, what has been largely overlooked is the court’s censure of Beijing’s rampant destruction of marine life around the sites of its reclamation and other activities in the Spratly Islands. The construction, the judges held, had “caused permanent and irreparable harm to the coral reef ecosystem.” Yet Chinese leaders refuse to accept the tribunal’s criticism. Beijing, in fact, denies its island-building posed any danger to the natural habitat of the region, even calling it a model “green project”.

Nor was the damage inadvertent. The tribunal found that Chinese authorities were fully aware of the nature and scope of activities undertaken but failed to prevent them. Despite its obligation under Articles 192 and 194 of the United Nations Convention on the Law of the Sea to preserve and protect the marine environment, Beijing supported activities that harmed the fragile ecosystem of the South China Sea.

For years, China’s most destructive activity in the South China Sea has been giant clam poaching, which is said to have destroyed more than 40 square miles of some of the most bio-diverse coral reefs in the world. Chinese poachers reportedly use boat propellers to loosen the valuable clams, whose shells are sold as luxury items in China. Not only does digging up a reef destroy its ecosystem, but because of the interconnected nature of South China Sea fisheries, damage in once place causes repercussions elsewhere.

Evidence notwithstanding, Beijing claims its activities provide a public good. At the Shangri-La Dialogue earlier this year, Admiral Sun Jianguo, the People’s Liberation Army’s deputy chief of general staff, said that apart from “meeting the necessary defense needs,” China was carrying out construction on some islands and reefs in the South China Sea to better perform its international responsibilities, including environmental protection. If anything, Chinese analysts say the widespread damage to the regional marine bio-system must be blamed on rampant poaching that regional states collectively failed to prevent.

Such claims serve to distract attention from the destruction wrought by Chinese island-building and other activities on the marine environment. Under international law, island-building must be preceded by an environmental impact assessment. Beijing’s omissions in this regard are inexcusable. In conceiving their island-building plans, Chinese engineers would have considered the environmental consequences. Surprisingly, China’s position paper submitted to the arbitral tribunal in December 2014 did not mention any studies undertaken to assess environmental damage caused by large-scale reclamation. By refusing to accept responsibility for its actions, Beijing has shifted the onus for remedial action to other littoral states.

Faced with an environmental disaster, Southeast Asian states must collectively move to preserve and protect their regional maritime environment. A primary consideration is the conservation of fisheries, particularly the management of straddling and migratory fish stocks. Recent reports suggest the stocks in the South China Sea are in a precarious condition — fished down to between 5 and 30 per cent of 1950s levels. With illegal, unreported, and unregulated fishing at an all-time high, there is an urgent need to coordinate efforts. Regional states will need to begin by creating greater transparency about resource exploitation activities in the maritime commons. Each side must promote best practices to ensure that the ecosystem is properly preserved and sustainably exploited.

Creating a regional mechanism to preserve the marine environment is going to be the most challenging part of this project. In April this year, at the first meeting of a study group of the Council for Security Cooperation in the Asia Pacific in the Philippines, discussions were held on evolving codes and protocols for marine environment protection. The group stressed developing a collective approach in managing commercial and livelihood activities in the oceans. But particular emphasis was given to preservation of coral reefs in East Asia.

This isn’t the first time regional states have come together in the interests of the natural habitat. In 2011, when the UN Environment Program (UNEP) relocated its Coral Reef Unit to Bangkok, Southeast Asian states collaborated in developing tools and methods to enable ecosystem-based approaches to coral reef management. In 2012, the Asia Pacific was a target region in the UN document, “The Future We Want,” and its identification of coral reef protection as a central objective and a Sustainable Development Goal to be achieved by 2020. But despite its calls for “conservation and sustainable usage of oceans” and elimination of “the multiple anthropogenic pressures on coral reefs,” practical measures undertaken have been less than successful in protecting the marine ecosystem.

Even so, the UNEP has been the principal instrument by which the region has applied ecosystem management. The program has focused on preventing marine litter; building coral reef resilience in the face of climate change and ocean acidification; strengthening the use of the value of coral reef ecosystem services in public and private decision-making; enhancing data and information for ecosystem-based coral reef planning and management; and institutional support and outreach.

As the world obsesses over the geopolitical effects of the South China Sea dispute, there are urgent questions about the marine environment that need to be answered. The marine resources of the South China Sea are central to the national economies, the livelihoods of many of their coastal residents, and important as a source of cheap and nutritious food. There is an impression, however, that the sovereignty disputes have diminished the ability of governments to work together to manage the marine resources of the South China Sea. Regional governments must dispel this notion. China and its neighbors must put traditional rivalries on hold, and combine effectively in a renewed bid to revive and restore the maritime ecology of the Asia Pacific.