Why the U.S. Army Must Modernize now Rather Than Later 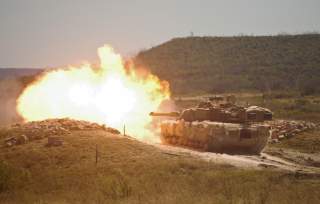 The Chief of Staff of the Army, General Mark Milley, is on a mission to quickly restore his service's capability to conduct a high-end fight in order to deter a real war with rising powers. The U.S. Army today is the best counter-terrorism/counterinsurgency force in the world. But that is no longer enough.

The U.S. now faces five national security challenges -- that's government speak for adversaries. Four of these are nation states and two, Russia and China, are considered great powers. Both these states have national narratives based on being aggrieved parties seeking to right past wrongs and reassert their natural positions of primacy in their respective regions. Therefore, they have a strong interest, evidenced by their behaviors, in overturning the existing international order and becoming regional hegemony. They both are constructing a menu of national capabilities, including both conventional and nuclear forces, designed for an offensive political-military strategy.

Deterring challengers who have extremely powerful reasons for seeking confrontation and, potentially, conflict with the U.S. and its allies and a growing panoply of military and so-called hybrid capabilities, will be the greatest national security problem of the 21st Century. It will require, in part, investments in a more modern and possibly larger American military. These investments need to begin now because Russia and China are on the march.

Far and away, the military service most in need of modernization is the U.S. Army. It has suffered more than the other services from the current period of budgetary stringent. It has been the victim too of self-inflicted acquisition wounds that basically devastated its modernization program. As a consequence, it has no new armored fighting vehicle in development and is only just starting on the next rotorcraft, long-range fire system and air defense. But the Future Vertical Lift program will not produce a revolutionary rotorcraft on General Milley’s watch nor that of his successor’s successor. The next generation combat vehicle won't replace the Abrams and the Bradley for at least two decades.

If the Army wants to be ready for the hard fight in the near-term it has no choice but to upgrade existing platforms and systems and buy more of what is currently in production. Army modernization needs to leverage open production lines and existing programs. This means upgunning Stryker brigades, accelerating current modernization programs for the Abrams, Bradley, Paladin, M-113 replacements, Multiple Launch Rocket System, Apache and Blackhawk, buying additional sets of the Warfighter Information Network-Tactical communications system, deploying active protection systems on front-line combat vehicles and filling up ammo stocks. These may not be sexy, but they are real.

The end of the Budget Control Act, a large supplemental budget for FY 2017 and a rewriting of the Obama Administration’s FY 2018 defense budget will open doors for major changes in Pentagon acquisition programs. The jockeying by the military services to get a bigger share of what they expect will be increased. The Army needs to develop and articulate a list of priority unfunded requirements. The Navy has done so, saying that if more resources were available it would acquire additional attack submarines, missile destroyers and amphibious warfare ships.  The Army needs to be equally forthright.

General Milley's chief challenger in his quest to rebuild the Army's ability to wage war is not the White House, Congress, the Office of the Secretary of Defense or even the other services. It is his own acquisition bureaucracy. Should the Army get additional resources for modernization from the Trump Administration, the danger is that this acquisition bureaucracy will see this as an opportunity to begin anew its quest for next generation capabilities. There is a large, entrenched Army acquisition bureaucracy whose primary reason to exist is to develop the next great thing in combat vehicles, electronics, fires, aviation and communications. It has resisted reasonable proposals to buy non-developmental items that provide an 80 percent solution. There is always a widget in development that will be so much better than the current item if enough money and time are spent on it.

The Chief needs to make his priorities clear, particularly within his own service. He needs to ensure that the incoming Secretary of the Army and, possibly more important, the Assistant Secretary of the Army for Acquisition, Logistics and Technology (ASA/ALT) understand what must be done. This also places in high relief Milley’s choice to replace the outgoing Lieutenant General Michael Williamson as the Principal Military Deputy to the ASA/ALT. General Williamson experienced resistance from the acquisition bureaucracy for his efforts to get near-term capabilities into the field. The new Principal Military Deputy must lead the effort to accelerate near-term modernization.