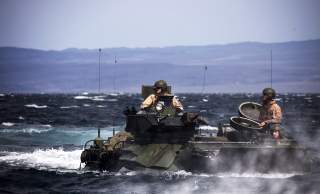 The U.S. Marine Corps’ plan to replace its aging fleet of Amphibious Assault Vehicles (AAV7) is about to take a major step forward.  By the end of June, the two teams vying for the contract to build the first of a series of increasingly sophisticated Amphibious Combat Vehicles (ACV) will each provide the Marine Corps with 16 prototypes of their proposed solution for testing. The current plan is to release a final request for proposal by the end of the year and award a contract for the first tranche of some 200 ACVs by June 2018.  Delivery of these vehicles is to be completed by 2025.

The ACV program is a model for how a military service with an urgent need to enhance its warfighting capabilities, but constrained by a lack of time and a scarcity of funds, can pursue near-term modernization. The Marine Corps’ initial effort to replace the AAV7 with a new platform, the Expeditionary Fighting Vehicle (EFV), an altogether remarkable armored platform capable of high speed movement from landing ships to shore, fell afoul of a combination of changing requirements and declining procurement budgets. In response, the Marine Corps came up with a clever solution: a phased modernization program for the ACV that would produce sets of increasingly capable platforms as technology and resources become available. In addition, to meet the Marine Corps’ near-term needs, some 400 AAV7s will be upgraded.

The ACV program envisions acquiring a three-phase procurement program. The current competition is for the ACV 1.1.  This will be a derivative of an off-the-shelf vehicle, carrying 10-13 Marines plus crew, and capable of operating as part of a mobile ground combat team alongside Marine Corps M-1 Abrams tanks and the residual AAVs. Although it will primarily move from ship to shore aboard a specialized connector, it will be able to self-deploy from vessels located close to the coastline (up to 12 nautical miles) and travel on the water at a moderate speed. The ACV 1.1 will provide a critical early entry capability for the Marine Corps, along with the force of upgraded AAVs.

The second phase of the ACV program, Increment 1.2, will acquire some 400 improved vehicles in multiple configurations. As currently defined, the requirement for the basic Increment 1.2 platform is for a wheeled vehicle, capable of carrying a full Marine Corps rifle squad of 13 plus crew, have a water speed equal to or greater than that of the legacy AAV7 and capable of carrying larger and heavier weapons.

The final phase of the program, ACV 2.0, is envisioned as a new design, capable of high at-sea speeds and also able to operate effectively in land combat. It would carry 10 to 13 Marines plus crew, have a high level of force protection and sufficient on-land mobility to operate alongside other Marine Corps armored vehicles. ACV 2.0’s high on-water speed would allow it to be deployed from amphibious ships stationed far out to sea.

The two companies vying to provide the ACV Increment 1.1 are BAE Systems and Science Applications International Corporation (SAIC).  BAE Systems is teamed with Iveco, an Italian corporation, to provide an improved version of the latter’s highly successful, SuperAV. The basic SuperAV is an armored, 8x8, wheeled vehicle that already is capable of amphibious deployment. It was chosen by the Italian Army to replace its aging AAV fleet. The version of the SuperAV offered by BAE Systems is a significant upgraded version of the original design, with a more powerful engine, a V-shaped underbelly for protection against improvised explosive devices, new transmission, larger tires, advanced protective features and new electronic systems. The basic design will be armed with a 50 caliber machine gun, although the ACV 1.1 can be fitted with a two-man turret or a remote weapons station capable of carrying weapons up to 40 millimeters. Iveco will make a number of key components, but hull construction and vehicle assembly will take place in the United States, at BAE Systems facility in York, Pennsylvania.

The BAE Systems/Iveco offering already meets virtually all of the requirements for the Increment 1.2 vehicle. In addition, the team recently completed at-sea trials of its ACV. According to published reports, the tests successfully demonstrated the vehicle’s at-sea capability as well as ship launch-and-recovery.

SAIC is bringing to the competition a version of the Terrex 1 wheeled amphibious vehicle built by Singapore’s ST Kinetics and operated by that country’s military as well as the Turkish Army.  The upgraded vehicle, dubbed Terrex 2, is larger than the original vehicle, allowing it to carry 11 Marines plus a three man crew, has a more powerful engine, a double-V hull and improved at-sea performance. The Terrex 2 can be deployed with a machine gun or 30 millimeter cannon in a remote weapons station.

The Marine Corps ACV program is an example of smart procurement focused on meeting critical near-term modernization requirements. Based on its experience in the EFV program, which pushed the boundaries of technology, the Marine Corps has chosen a lower-risk path based on deliberate incremental modernization. As a consequence, Marine riflemen will get better and more affordable vehicles soon while research continues on the ACV 2.0.