Why the U.S. Military's Unmanned Surface Vehicle Could Be a Game Changer 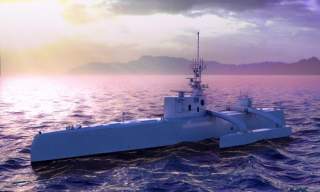 A key advantage of using remotely-controlled drone ships is that, quite naturally, they can save sailors and marines from being exposed to enemy fire during an attack operation.

Different mission kits are being developed more various mission applications, allowing unmanned ships to perform a wide range of tasks currently performed by manned vessels. The kits are exchangeable so that ships can be operated as both manned and unmanned systems, he added.

“This can greatly help expeditionary logistics for a ship that is standing off from the shore. Instead of having to use an amphib manned by a lot of people - you have an unmanned boat supply boat,” Roper said.

Computer processing speeds and algorithms are progressing at an alarming rate, increasingly allowing unmanned ships to perform a greater range of functions without necessarily needing human intervention for each particular step.

Roper added he expects this “autonomy kit” effort to progress for another two years before it is formally fully transitioned to the Navy. The Navy is, however, already involved in this testing and technological maturation lead by the Pentagon effort; the Strategic Capabilities Office is a special DoD-level effort to integrate harness, leverage and integrate near-term emerging technology for faster delivery to combatant commanders at war. Much of this involves merging new platforms, weapons and technologies with existing systems in a manner that both improves capability while circumventing a lengthy and often bureaucratic formal acquisition process, Roper explained.

Higher tech enemy sensors and longer range surface and land-fired weapons have drastically increased the vulnerability of approaching amphibious assault operations, making them more susceptible to enemy fire; as a result, the Navy and Marines have been evolving amphibious tactics to include more dis-aggregated approaches designed to spread out an approaching force – making it more difficult for enemy weapons to attack an advancing assault.

For example, the historic amphibious assault such as the famous Iwo Jima attack in the Pacific during WWII involved a group of Marines approaching enemy shores in close proximity to one another; weapons, Marines, equipment and attacking infantry all came ashore in rapid succession, at times close to one another. Modern threats, quite naturally, are changing amphibious tactics to succeed against higher-tech more lethal enemy weapons.

“Instead of having to land as a single unit, they can now break out. There is safety in numbers and they can re-distribute,” Roper explained.

When it comes to offensive surface operations, unmanned boats could form a swarming of small attack craft designed to overwhelm and destroy enemy ships with gunfire, explosives or even small missiles.

Roper explained that this strategic and tactical trajectory is greatly enhanced by the possible use of USVs. The Navy’s current inventory includes ship-to-shore amphibious craft called Landing Craft Air Cushions, LCACs, and Landing Craft Utility Vehicles, LCUs; these platforms, now being upgraded by newer transport boats able to move faster and carry more payload (such as Abrams tanks), are manned and therefore involve the use of a crew. LCACs require a crew of 13 and LCACs use a crew of 5. New high-tech LCAC replacements, called Ship-to-Shore Connectors, are already being developed and delivered to the Navy by Textron.

The Navy and the Office of Naval Research are already immersed in the development of a variety of USVs, including a mine-detecting Unmanned Influence Sweep System, or UISS, for the Littoral Combat Ship. The UISS is carried by a Textron-developed Common Unmanned Surface Vehicle, or CUSV. The CUSV, in development since before 2009, can travel for more than 20-hours carrying up to 4,000-pounds at speeds up to 20-knots, Textron information states. Also, it is engineered to withstand waves up to 20-feet.

The UISS is engineered to find and detonate undersea mines in order to save sailor and manned vessels from a potentially deadly explosion.

The Navy’s influence sweep system will be towed behind the unmanned vehicle and will emit sounds and magnetic signatures that mimic a ship – setting off nearby mines that listen for passing ships, according to a report from the US Naval Institute.

The Navy is also advancing its recently christened DARPA-inspired submarine-hunting unmanned ship called Sea Hunter; the ship is built to travel up to 10,000 miles while using sonar and other sensors to locate enemy submarines. A high-frequency sonar will send acoustic “pings” into the ocean before analyzing the return signal to determine the shape, size, speed and characteristics of any undersea enemy activity.

The effort began in 2010 as an anti-submarine ship called “ASW Continuous Trail Unmanned Vessel,” or ACTUV. The Sea Hunter can be controlled by a human “tele-operator” able to maneuver the ship with a joystick. Also, it is possible the Sea Hunter could be armed with lethal weapons in the future, a scenario which current Pentagon doctrine says much hinge upon a human decision-maker in the role of command and control.

Meanwhile, the Navy is also developing refueling Unmanned Surface Vehicles that are launched and recovered from a host ship. A refueling and data transfer system that is remote from the host ship and proximate to the USV operating area will allow a substantially greater fraction of a Navy USVs’ endurance to be spent on performing the mission rather than on non-mission activities associated with refueling, including transiting to and from the host ship and being deployed and recovered on the host ship.

This effort, asking industry to design, build, test and demonstrate a prototype USV to be called Offboard Refueling and Data Transfer System, or ORADTS. It will be designed to be more rugged and survivable than existing USVs and travel at longer ranges to extend mission possibilities.

“The ORADTS design must improve on previous designs by providing a more robust system that enhances system usability in higher sea states, reliability, and maintainability for implementation in Navy operations,” a Navy Broad Area Announcement states.

This initiative represents a portion of the execution or operational manifestation of a 2007 service roadmap called “The Navy Unmanned Surface Vehicle Master Plan,” which calls for the eventual combat deployment of a broad range of USVs to include ships for countermine missions, surface warfare, anti-submarine warfare, Special Operations support and electronic warfare, among other things.

Plans for USVs include a small “X-class” of boats, a 7-meter “Harbor Class,” a “Snorkeler-Class” and an 11-meter “Fleet-Class” boat, the master plan states.

The refueling port of the USV is located on the starboard side of the craft, above the waterline, about midships. There will be up to 2 terabytes of data to be offloaded from the USV, per refueling iteration, the documents add.