Why the U.S. Navy's America-Class Amphibious Assault Ships are One of a Kind 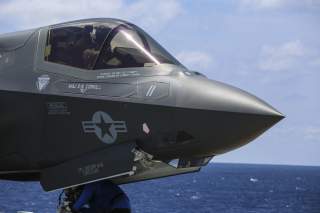 Construction of the ship, LHA 8 (Bougainville), is scheduled to commence in late 2018 with delivery planned to occur in 2024, Navy officials have told Scout Warrior.

Unlike the first two of 11-planned America-Class Amphibs built with an aviation focus without a well-deck, LHA 8 will be built to accommodate both air and surface amphibious assault missions.

A statement from shipbuilder Huntington Ingalls Industries (HII) said the well deck will give the U.S. Marine Corps the ability to house and launch two landing craft air cushion hovercraft or one landing craft utility as needed during maritime missions. These connectors, which the Navy is now upgrading, enable amphibious forces to move Marines, weapons, assault vehicles and other combat assets from ship to shore.

HII was recently awarded a $3 billion contract for the detail design and construction of the ship, Navy and HII developers said. This follows an original long-lead material contract awarded to HII for LHA 8 last year.

Integration of a well deck into a new, high-tech class of amphibs represents key elements of a multi-year conceptual trajectory informing Navy thinking about amphibious warfare strategy in a modern threat environment.

As the Marine Corps more fully returns to its amphibious roots, and pivots from a decade and a half of ground wars in Iraq and Afghanistan, many planners see the need to strengthen and solidify a high-tech, modern amphibious assault concept well suited to engage in major power, near-peer type warfare against technologically advanced adversaries.

While the tactical, strategic and operational factors are now quite different than they were decades ago when Marines launched its historic attack on Iwo Jima, amphibious assault operations are expected to figure prominently in war planning for decades to come.  They naturally provide Combatant Commanders with additional offensive operations and, in some scenarios, might be required to attack an entrenched coastal force less reachable by air power.

Furthermore, while air power will of course support amphibious assault operations, it may still be necessary in many instances to have Marines operate on the ground in hostile territory. So while military strategists and planners recognize that, in a modern threat environment, amphibious operations may take on an entirely different character compared with years past – they are nevertheless an indispensable element of any US military war calculus.

Potential adversaries now have longer-range weapons, better sensors, targeting technologies and computers with faster processing speeds, resulting in scenarios where amphibious forces approaching the shore may need to disperse to make it harder for enemy forces to target them.

Speed and maneuverability are also recognized as fundamental to offensive operations, one reason the Marine Corps is working vigorously to explore the technical feasibility of a super high-water speed amphibious assault vehicle able to attack rapidly from beyond the horizon, leaving ships at a safer distance from enemy fire. Essentially, if advanced enemy precision weaponry precludes amphibious assault ships from operating in closer proximity to targets, closer to the shore, the Navy and Marine Corps will still need to hold potential adversaries at risk of amphibious attack.

Accordingly, overcoming this “tyranny of distance” and emerging long-range enemy threats, is part of the rationale for the Navy’s plan to build the first two America-Class Amphibious Assault ships with a distinct aviation focus – and without a well deck.

Larger deck space for aircraft such as the V-22 Osprey and F-35B, combined with a larger hangar for aircraft storage, were designed to enable air platforms to launch attacks at ranges far greater than traditional amphibious assaults.

Leveraging the advanced technology of the V-22 Osprey and F-35B is a large part of the reasoning for the aviation focus of the first two America amphibs. The speed and range of the Osprey, along with the sensors, weapons and ISR technologies of the F-35B promise to greatly change the nature of amphibious war.

The concept behind the aviation-focus of the first two is described, at least in part, in terms of what Navy and Marine Corps officials refer to as “vertical maneuver” –  an ability to move well-supplied amphibious assets, gear, Marines, weapons and equipment inland using aircraft such as the Osprey. The idea is to air-drop forces behind a potential adversaries’ fortifications or front-line defenses.

The ships can transport up to 3,000 sailors and marines, including elements of a Marine Expeditionary Unit, or MEU, designed for amphibious warfare.  Amphibious technology on board the ship can include up to 60 HMMWs, Light Armored Vehicles, mortars, artillery and smaller Internally Transportable Vehicles, or ITVs, configured to drive into the back of an Osprey, Navy and Marine Corps officials described.

The F-35B can conduct a wide range of missions to include support for amphibious ship-to-shore operations, ground operations, close-air support and what’s called “suppression of enemy air defenses."

At the same time, the advanced sensor suite and computers on the Joint Strike Fighter will allow for a greater range of missions compared to traditional fighter jets.

The F-35B will also be used as a C2 (Command and Control), limited offensive and defensive counter air, air interdiction, assault support escort and armed reconnaissance, service officials have said

The USS Tripoli is 844-feet long and 106-feet wide with a weight of more than 44,000 tons. A fuel-efficient gas turbine propulsion system brings the ship’s speed up to more than 20 knots, a Huntington Ingalls statement said.