Why the U.S. Navy Fears Russian and Chinese Submarines 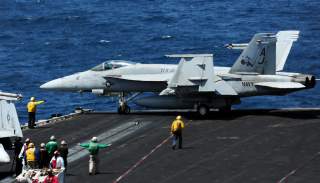 Ultimately, the Navy will need to increase submarine production if it wants to make up for the submarine deficit, but that will mean that Congress will have to increase the service’s shipbuilding budget.

Enemy submarines remain the single most dangerous threat to the United States Navy’s aircraft carriers and its surface fleet at large. However the service is working on improving its anti-submarine warfare (ASW) capabilities as the once-dormant Russian undersea force reemerges and China grows its fleet.

While anti-ship cruise and ballistic missiles often capture the lion’s share of the attention, submarines armed with Russian-made 533mm and 650mm waking-homing torpedoes are among the only threats that can actually sink an aircraft carrier. “A torpedo properly placed under the right part of the keel is one of the few things that can actually flatout sink an aircraft carrier,” retired U.S. Navy Capt. Jerry Hendrix, director of the Defense Strategies and Assessments Program at the Center for a New American Security told The National Interest.

The U.S. Navy’s top leadership agrees—submarines remain the single greatest threat to the carrier and the surface fleet. “That’s not new news,” Adm. John Richardson, chief of naval operations, told The National Interest on Aug. 25 during an interview in his office in the Pentagon. “The submarine is a very asymmetric weapon. By virtue of its continued ability to stay hidden... It’s immune from a lot of those detection systems, which is the first step in any kind of a weapon engagement—you got to detect.”

Richardson said that the U.S. Navy is focusing more on ASW with a combination of air, sea and undersea forces. One way to ensure the safety of the U.S. Navy’s surface fleet is to ensure that the service’s attack submarine (SSN) force remains dominant in the undersea realm. “We spend a lot of time on that dynamic,” said Richardson, who spent most of his long naval career onboard nuclear-powered submarines. “One is for our own submarines, we want to make sure they can get into those really influential places and stay there—and part of staying there is being stealthy enough to remain hidden and keep that undersea superiority we have.”

But increasingly, for the first time since the 1991 collapse of the Soviet Union, the U.S. Navy finds itself challenged under the waves. “There is an awful lot of competition for that space,” Richardson said. “So we can’t get complacent, we can’t rest on our laurels for one minute, otherwise that window will close and we’ll find—that they’re achieved parity undersea. So we’ve got to continue to push and also to develop our own anti-submarine warfare systems—which is an area of really big emphasis.”

The U.S. Navy currently has about fifty-two attack submarines in its fleet against a requirement for forty-eight boats. However, even with fifty-two boats, the service is struggling to meet the demands of combatant commanders in the North Atlantic and the Pacific as the Russian and Chinese fleets ramp up their activities. But the problem is that the SSN force is set to shrink to forty-one by 2029.

While the threat posed by the Russian and Chinese fleets is real, it is not a crisis per se. “It’s not an insurmountable problem by any means,” Richardson said. “But having said that, we need to be cautious. The Russians have always built very sophisticated submarines and they’re a very creative people; their engineering is getting better. So I am always cautioning my team about writing anybody off too soon. In terms of the complexity of the threat, the Russians are setting the pace.”

China poses more of a threat just in terms of the sheer number of submarines Beijing has at its disposal. “In terms of just a capacity challenge, the Chinese are building a lot of submarines,” Richardson said. “Some of them—at least from a quietness standpoint, it’s going to take some time to find them—they’re diesels, they’re AIP—those sorts of things. They’re just inherently quiet... it’s just something that’s going to take a while to achieve because you have to find them and get to them. And then quantity has a quality of its own.”

Given the threat, the Navy is reviewing its forty-eight-boat requirement because it was set at a time before the reemergence of the Russian fleet and before China became a factor beneath the waves. Thus, given those factors, the Navy’s current forty-eight-boat requirement is likely set too low. “We have to validate what’s the right number and then what can we do to mitigate that risk,” Richardson said.

But exactly how the U.S. Navy will mitigate those risks has yet to be determined.

“We’re doing a force-structure assessment this summer to get at some of those questions,” Richardson said. The Navy is trying to find a balancing point between the number of submarines it needs versus the available resources. “Even unlimited resources don’t mean you buy unlimited amounts of submarines or ships or aircraft carriers or whatever. There is an adequate amount that gets you to a point where you have addressed all of your risks,” Richardson said.

Ultimately, the Navy will need to increase submarine production if it wants to make up for the submarine deficit, but that will mean that Congress will have to increase the service’s shipbuilding budget. “We reach a minimum of about 40 to 41 in the late ‘20s, early ‘30s before we start climbing back up out of that,” Rear Adm. Michael Jabaley, the Navy’s program executive officer for submarines, told an audience at the Center for Strategic and International Studies on July 8. “This is not something we can we fix at this point—it’s the result of decisions made long ago.”