Why the World Should Fear France's Armored Fighting Vehicles 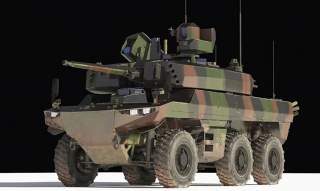 At Eurosatory 2018, one of the vehicles being displayed publicly for the first time was the French Jaguar Armored Fighting Vehicle (AFV). The twenty-five ton vehicle has a range of eight hundred kilometers, a max speed of ninety kilometers per hour, and sports an impressive armament that includes a new cased-telescopic ammunition CT40 autocannon and two anti-tank guided missiles. However what may be surprising is the cannon that the Jaguar packs is actually smaller than the one mounted on the AFV it’s replacing. It checks in as yet another in a line of French reconnaissance vehicles which have packed a dynamite combination of mobility, firepower, and protection. What can the United States learn from the French example?

The French military has long favored armored cars since World War II. Their first postwar design, the Panhard EBR, was an incredibly innovative design, able to go up to one hundred kilometers per hour and mounting a seventy-five millimeters and later 90mm cannon in an oscillating turret. It saw service in Algeria, where its ability to rapidly reposition and the significant firepower of the cannon was found to provide valuable fire support to infantry formations.

In addition to the EBR, the Panhard AML series of armored cars served admirably during France’s involvement in African wars. They defeated far heavier T-55 and T-54 tanks with their ninety millimeter guns, in the French involvement in Chad. This performance was repeated by Israeli AML-90s during their conflicts on the Sinai. The Eland 90s, an adaptation of the AML-90 built entirely in South Africa performed well against Angolan T-55s during the Border War.

The AML and the EBR were replaced in French service by the ERC-90 Sagaie and AMX-10RC. The AMX-10RC took things even further, replacing the ninety millimeter gun with a 105 millimeter gun, giving it performance just slightly south of MBTs of the era (due to the lower pressure of the gun). In operations in Mali against Al Qaeda backed rebels, the ERC-90 was rated by analysts as being a good all-terrain vehicle. The ability to retract the middle pair of wheels to reduce drag and conserve fuel while conducting road movements, or to drop them before going offroad gives the ERC 90 tactical flexibility and fuel efficiency, important aspects when fighting a counterinsurgency war in a wide open theatre.

The AMX-10RC on the other hand has served in a role that heavier armor traditionally plays in COIN operations. It has participated in Operation Desert Storm and the War in Afghanistan with satisfactory reports, but the most has been written about its performance during Operation Serval, the French intervention in Mali. In a RAND report about the operation, a brigade commander of a cavalry unit boasted that his vehicles traveled between 2500 to 5000 km offroad, near the enemy, in austere conditions, without the need to conduct major repairs.

Now, France is looking to replace the AMX-10RC and ERC-90 with the EBRC Jaguar. While the brigade commander boasted of the performance of his vehicles, he also mentioned that the AMX-10RCs and ERC-90s, which were adopted in the 1980s, were reaching the end of their lifespan. Interestingly, the EBRC Jaguar appears to be taking a different path from earlier French wheeled reconnaissance and fire support vehicles. Earlier vehicles largely fielded single-shot medium to large caliber cannons: the 75 millimeter, 90mm, and 105mm. In contrast, the Jaguar is armed with a forty millimeter autocannon, although some sources state that it was tested with a larger 120 millimeter cannon, this was not present in recent mockups or the vehicle displayed at Eurosatory 2018.

The Jaguar moving to an autocannon is probably reflective of the French Army’s growing experience with larger-caliber autocannons and appreciation of them. The VBCI infantry fighting vehicle that France acquired throughout the 2010s is armed with a 25mm autocannon, and positive operational experience with this vehicle could have affected the armament decision on the Jaguar. Advances in technology for autocannons also could have come into play, the CT40 autocannon in the Jaguar is more tactically flexible than the larger cannons mounted on earlier vehicles, being able to shoot airbursting high explosive ammunition, as well as shooting armor-piercing rounds that match the performance of early 90mm rounds.

While the United States does field a fleet of wheeled armored vehicles, primarily in the Army’s Stryker brigades and Marine Corps’ LAR Battalions, American formations appear to lack the tactical flexibility and strategic mobility French cavalry formations have brought to their COIN fights. The American formations also lack the appear to lack the organic firepower the French formations bring: The Stryker MGS is generally considered to be a lackluster gun platform, compared to the AMX-10RC which is considered to excel at its role, due to the manned turret granting the crew superior situational awareness.