Why the World Should Fear India's New ICBM's 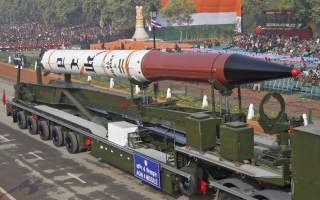 Beijing is closely watching India’s testing of an intercontinental ballistic missile (ICBM), allegedly nuclear capable, amid concern it may pose a threat to the region as well as global nuclear-nonproliferation.

Indian Defence Minister Nirmala Sitharaman proclaimed last week that the Indian Army had launched a nuclear-capable ballistic missile, Agni-V, and the Times of India revealed that the nation’s first ICBM could reach the northernmost parts of China with a strike range of over 5,000 kilometers. That puts Beijing, Shanghai and Guangzhou well within range.

But Chinese military observer Song Zongping noted in the nationalist tabloid the Global Times that there was no further proof that the missile had met all parameters for the test.

Hu Zhiyong, a research fellow at the Institute of International Relations at the Shanghai Academy of Social Sciences, also expressed skepticism in the same paper, claiming “though the missile could theoretically hit Beijing, India’s missile technology is far below the standard.”

The ace among China’s long-distance missiles is the DF-41, which runs on solid fuel and is road-mobile. With a range of between 12,000 to 15,000 km and a top cruising speed of Mach 25 (30,870 kph), it can carry several thermonuclear warheads – each capable of being aimed to hit a different target.

India has a smaller economy and less money in government coffers but has shown Beijing it has a growing nuclear arsenal under the nation’s Strategic Forces Command.

Xinhua also reported that India’s 50-ton ICBM was just a few tests away from mass production and deployment.

Aside from the shorter-range Prithvi and Dhanush missiles, India’s Strategic Forces Command already has earlier Agni missiles – versions I, II and III – in its arsenal.

Bruce W. MacDonald, a top US missile defense expert, told Asia Times that “China is worried about North Korea but it is not worried about being attacked by them,” but Indian nukes were another matter.

The test came a day after India staged joint sea drills with Japan’s Self Defence Force in the Indian Ocean. Beijing’s military build-up and posturing over recent years has fueled a common antagonism that has drawn New Delhi and Tokyo closer.

India is also seeking to boost military cooperation with ASEAN nations in a bid to contain China in the Indian Ocean, as well as the South China Sea.

Papers in China are now urging the People’s Liberation Army to expand into South Asia and the Indian Ocean with drills and “freedom-of-navigation” flyovers, and to prop up Pakistan’s defense capabilities as an outpost and buffer. Some have gone so far as to suggest that medium-range DF missiles be deployed in eastern Pakistan to counter any threat from India.

The PLA now reportedly operates a base at Gwadar port in Pakistan, although its location suggests the base is meant to protect Chinese ships passing through the Arabian Sea and be a point of replenishment for its warships.

But it seems unlikely another base could be set up on the subcontinent, given it would inflame tensions between Islamabad and New Delhi.