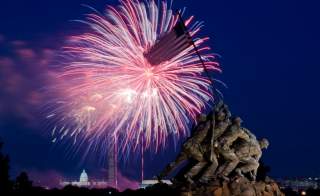 While America’s birthday has always been “solemnized with pomp and parade, with shews, games, sports, guns, bells, bonfires and illuminations from one end of this continent to the other” as John Adams anticipated, these revelries were once paired with other traditions that kept the cause for celebration front of mind.

These speeches delved deeply into the principles expressed in our declaration, often summarizing the major works of the Enlightenment that shaped our founders’ view of government.

An 1824 oration delivered by a local reverend to a gathering of New York City firemen referenced Hume, Voltaire, Paine, Bolingbroke, Shaftsbury, Locke, and Bacon all in the space of about two minutes.

Patriotic toasts were also common during the 19th century. After the day’s festivities concluded, revelers would raise their glasses for 13 toasts, one for each of the original states.

The topics of these toasts were wide ranging. Participants drank to everything from “the American Revolution: founded upon principle, its origin the source of lasting happiness to millions left unborn” to “kingcraft, on its last legs on the Western continent.”

Dramatic readings of the Declaration of Independence were also a staple of Fourth of July celebrations in most cities and towns around the country. These readings took place before the day’s parade kicked off, preceding the evening’s fireworks, or any point in between. Like the oration, the reading of the declaration was often conducted by a town notable, but occasionally the honor was bestowed upon a local young person.

Some of these traditions have faded completely. While fraternal organizations like the Knights of Columbus and the Elks still hold Fourth of July cookouts in many towns, few begin with the once-customary 13 patriotic toasts.

Others still exist if in much diminished form. For instance, today presidents still typically give a short oration on the Fourth of July though these speeches are not widely watched or read. Nor do they deserve to be. Typically the president takes a moment to thank members of the military for their service, praises the founding generation for their courage, and wraps things up before the flies get to the potato salad.

At least one tradition of the past is making a comeback. This Independence Day, towns like Gadsden, Alabama; Dover, Delaware; and Bell Buckle, Tennessee will hold recitations of the declaration in town squares and local parks.

This is a good sign. Americans should work to ground pageantry in principle. True, attending an hour-long lecture on Enlightenment philosophy might be a little much to ask.

Instead, read the Declaration of Independence just as the first fireworks ignite overhead. Give a toast to those who pledged their lives, fortunes, and sacred honor to our new nation. Say a short prayer to the God who granted our founding generation one of the most improbable victories in military history.