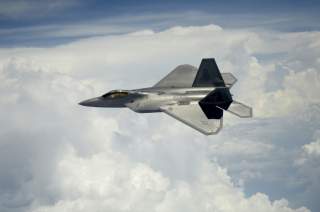 The Republic of Korea will plead with the U.S. government to transfer vital technology for its nascent KF-X stealth fighter program this week when that nation’s president visits the White House. South Korean president Park Geun-hye arrived in Washington, D.C., on Tuesday and is set to meet with President Barack Obama this Friday.

Park and South Korea’s defense minister Han Min-koo are also set to meet with U.S. secretary of defense Ashton Carter tomorrow at the Pentagon. While North Korea is likely to be the main focus of the talks, one of the South Korea’s major goals is to persuade the United States to release four key technologies needed for its indigenous “4.5”-generation KF-X fighter program. The country is co-developing the jet with Lockheed Martin—one of the quid pro quos for Korea’s selection of the F-35 Joint Strike Fighter for its F-X III fighter procurement program.

South Korea needs the United States to transfer active electronically scanned array (AESA) radar, electronic warfare, infrared search and track (IRST) and electro-optical targeting pod technologies before it can proceed with developing KF-X fighter. However, the Pentagon declined to transfer those four key technologies back in April. Nor is the Pentagon likely to reconsider its decision—Washington jealously guards such extremely sensitive and strategically important technologies. Even America’s closest allies are not afforded access to the technological know-how to build such systems.

In addition to those four technologies, Washington is also declining to help Korea with the fusion engine necessary to tie all of those sensors into a coherent picture for the pilot in the cockpit. One of the key features of American fifth-generation fighters like the Lockheed Martin F-22 Raptor and F-35 Joint Strike Fighter is so-called “sensor fusion” where data from multiple sources is correlated so that information is displayed in an easily understandable format. However, the Pentagon has invested decades of work and untold billions into these systems—and it is extremely reluctant to share the crown jewels of American technology with any foreign nation. As a rule, the Pentagon does not ever share the source codes for any of its weapons—as many allies have discovered the hard way.

That’s not to say the Defense Department doesn’t share technology—it does with many countries around the world. It just won’t share strategically vital technologies like stealth—for example. As mentioned before, South Korea is teaming up with Lockheed Martin to develop the KF-X. There are twenty other technologies Lockheed and the Defense Department are sharing with the Republic of Korea. Moreover, the KF-X is almost certainly going to be powered by American-developed General Electric F414 afterburning turbofans—used on the U.S. Navy’s F/A-18E/F Super Hornet. Korea’s previous “indigenous” T-50 jet trainer—developed in conjunction with Lockheed using F-16 technology—already uses a license-built derivative of the earlier General Electric F404 engine that powers the original “baby” Hornet.

And it’s not just Korea—even Sweden’s JAS-39 Gripen was developed using a large infusion of U.S. technology. As much as fifty percent of the Gripen’s technology comes from the United States. Indeed, it was once suggested that Sweden could sell the jet under the Pentagon’s Foreign Military Sales vehicle because it holds so much American technology. The same is true of previous Swedish fighter aircraft and other military technologies going back to the 1950s—though given Sweden’s publicly neutral stance during the Cold War, that’s not a widely known or advertised fact.

The fact is that given our world’s globalized supply chain, there are very few completely indigenous aircraft projects around the world. While airframe development is hard enough, most nations don’t have the budget, technology or infrastructure to develop key fighter components like radars and other sensors by themselves. But the single biggest challenge is developing a good, reliable jet engine—just look at China’s repeated failures in that arena. It’s also why Sweden imported the General Electric F404 design and license manufactured its as the RM12.

Most attempts at developing a completely indigenous aircraft are usually doomed to failure because reinventing the wheel inevitably drives up cost and developmental time lines. India’s disastrous Tejas light combat aircraft program is a good case study. India tried and failed to develop most of that fighter’s systems indigenously—thirty years later the result is an underperforming aircraft equipped mostly with imported systems. India ultimately failed to develop its own engine and radar. Instead, the Tejas is powered by the trusty F404 and is fitted with a derivative of the Israeli EL/M-2032 radar. To add insult to injury, the aircraft—which is not even genuinely operational—was obsolete long before the first jet was delivered to the Indian air force.

South Korea will not likely be able to develop the KF-X without extensive American help. While South Korea plans to develop the KF-X in three phases, it doesn’t have the indigenous capability to build a stealth fighter on its own—but the Korean government seems to recognize that fact. The first phase is basically a reduced observable fourth-generation fighter. The second phase adds an internal weapons bay, while the third phase would bring in true stealth capability. The earliest Korea can field the KF-X is probably around 2025, but there is a good chance the aircraft will be obsolete before it ever becomes operational. So the real question is: is it worth it to spend the money? The South Korea government apparently thinks so.