Will China and America Roll Back North Korea's Nuclear Program? 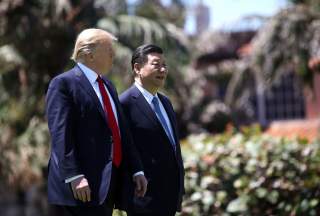 An apparent outcome of the Mar-a-Lago summit between US President Donald Trump and Chinese President Xi Jinping was renewed commitment to rolling back North Korea’s nuclear and missile programs. Trump muted his aggressive rhetoric towards China, particularly on economic issues. In return, China promised to pull North Korea back to the negotiating table — but is it possible to keep such a promise?

As with most presidential turnovers, Trump originally took great pains to differentiate himself from his predecessor by arguing that the era of ‘strategic patience’ was over. This Obama-era strategy involved a dual track approach of offering to negotiate on denuclearisation, but gradually tightening sanctions for both strategic and defensive reasons in the interim. The Trump administration, by contrast, emphasised that sanctions would be tightened significantly and that ‘all options were on the table’.

But in the wake of Mar-a-Lago, this new strategy of ‘maximum pressure and engagement’ quickly hit predictable roadblocks. While all options might be on the table, most military ones are either not good or entail significant risks to South Korea. And while the United States does have some residual instruments for toughening sanctions, the nuclear crisis that started in 2002 has had the perverse effect of pushing North Korea’s economy deeper and deeper into China’s embrace. US Secretary of State Rex Tillerson’s claim that China now accounts for about 90 per cent of North Korea’s trade is not an exaggeration.

If the United States wants to significantly tighten sanctions on North Korea, one of two things has to happen: either China has to acquiesce or the Trump administration has to escalate pressure on Pyongyang through secondary sanctions — an approach that China has consistently and roundly denounced. For the Chinese leadership, sanctions are not a tool that will lead directly to denuclearisation, and they are almost certainly right. Sanctions are but one instrument in a broader effort to bring North Korea back to the negotiating table.

But what is to be negotiated? Here is where the idea of a peace regime enters the picture.

The United States has long insisted that negotiations begin with denuclearisation before seeking to replace the armistice. But over the last several years, Pyongyang has advanced quite a different negotiating sequence. A peace regime would be negotiated first in order to build confidence. Only with such an agreement in train or in place could progress be made on denuclearisation. Yet it is unlikely that a US president would permit negotiations on a peace regime with a nuclear North Korea.

Chinese Foreign Minister Wang Yi has advanced a proposal that tries to square the circle. In a first phase — known as ‘suspension for suspension’ — mutual trust would be built by North Korea announcing a freeze on its nuclear and missile programs in exchange for the United States foregoing joint military exercises with the South. In the second phase, negotiations would commence not only on the nuclear issue but on a peace regime as well. This might occur in an omnibus negotiation or in separate but parallel fora.

The basic outlines of a peace regime are well-known, but the details are bounded only by the imagination. In the first instance, the armistice — an agreement among the militaries to stop the fighting — would be replaced by a peace treaty. South Korea was not a signatory to the armistice, as its forces fell under a UN Command headed to this day by a succession of US generals. Still, this core component of the peace regime would involve the four parties. A crucial element would be mutual recognition and the establishment of diplomatic relations between the United States and North Korea. The peace regime would no doubt include understandings between South and North Korea as well, building on the two North–South summit documents of 2000 and 2007 and perhaps security assurances from China.

But to date, North Korea has shown little interest in the Chinese proposal or in negotiating at all. China, desperately concerned that its influence in Pyongyang is slipping, is caught between difficult choices: whether to acknowledge that North Korea is a liability and push harder on bilateral sanctions to force Kim Jong-un’s hand, or to continue its maddening evenhandedness at the risk of gradually alienating the United States.

The Mar-a-Lago summit promised a 100-day honeymoon. That honeymoon is set to run out in July. To complicate matters, South Korea is also re-emerging as a player in the drama after being sidelined by the Park impeachment. South Korean President Moon Jae-in is well-known for favouring engagement and that issue will dominate his summit with Trump in Washington in late June. Can Moon move Trump to make a more explicit commitment to advancing the Chinese proposal? Or will Moon take the more conservative course of aligning with the United States around the nuclear and missile issue, slowing the pace of his engagement with the North?

US–South Korean relations may now determine the fate of denuclearisation negotiations — assuming, of course, that Kim Jong-un can be moved, and that issue remains far from clear.

Stephan Haggard is the Krause Distinguished Professor at the Graduate School of Global Policy and Strategy, University of California San Diego.