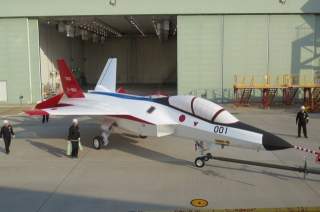 Japan has opened talks with Western defense contractors—including Lockheed Martin and Boeing—to develop a next-generation air superiority fighter. Tokyo is locked in a regional dogfight with Beijing to maintain control over the skies over the Sea of Japan.

The new Japanese aircraft could be based in part on the technologies being matured on Mitsubishi’s X-2 ATD-X stealth fighter concept demonstrator. The X-2 prototype is set to take to the skies for the first time in days, reports Reuters.

“They have begun exploratory engagement to look at our capabilities,” a source with a Western defense contractor told the news agency. “There is no policy decision and no program of record for the next fighter. There is only some discussion that, logically, there will be a fighter at some point.”

Japan needs to replace its F-15J Eagle air superiority fighters. In Tokyo’s estimation, the F-35—which was not designed primarily for the air-to-air role—won’t be enough to meet its requirements. While Tokyo is buying forty-two F-35s, those planes will replace Japan’s F-4J Kai Phantom II fleet. The plane Japan wanted as its F-15J replacement was the F-22, but U.S. law prohibited the Raptor’s export. “Japan really wanted the F-22 but it got the F-35,” a Japan-based source told Reuters. “This is a source of concern and frustration in Tokyo.”

That is one reason the Japanese are aiming to develop what is being called the F-3—potentially a operational variant of the X-2—as an air superiority fighter. Japan aims to field a new air superiority fighter in the 2030s—roughly at the same time the U.S. Air Force and U.S. Navy hope to field the F-X and F/A-XX respectively. That means that Japan might be able to leverage such an effort to join a U.S.-led sixth-generation fighter program. Tokyo probably can’t afford to pay for a $50 billion fighter development program on its own.

However, if Tokyo does manage to develop a new sixth-generation fighter on its own, it would mark the revival of Japan as an aerospace colossus. The country’s once-potent aviation industry was all but dismantled following the end of the Second World War.