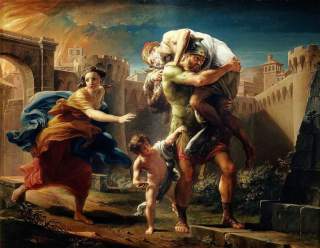 The words “coherent” and “worldview” don’t often appear in the same sentence when it comes to Donald Trump. (See last March’s interview in The New York Times.) But a recent piece by David Ignatius points out the challenge Trump’s “neo-isolationist views” pose to Hillary Clinton on foreign policy in the 2016 campaign. The normally on-the-mark Ignatius has misunderstood the debate: Donald Trump is not an isolationist, and the Manhattan real estate developer-cum-reality star-cum Republican standard-bearer may (gulp) have a point.

The slogan “Make America Great Again” taps into both the public’s insecurities about America’s status in the world as well as their personal economic maladies. However, Trump’s recent statements do not necessarily make him an isolationist. Second, Trump may be in the early stages of developing a revamped Nixon Doctrine, where America would foster greater burden-sharing with its allies. This is what should be debated in 2016, not a tired rehash of isolationism-versus-engagement.

In the interest of full disclosure, I served as an adviser on foreign policy to the campaigns of Sen. Lindsey Graham and Gov. John Kasich, two public servants who I feel would have made excellent presidents. I was also one of a handful of signatories to a letter to War on the Rocks pointing out the potential disasters Trump would bring to both the Republican Party and America itself.

First, isolationism has been described as “…a policy that never existed in the first place.” It was proponents of internationalism, such as Henry Cabot Lodge, that defeated the Treaty of Versailles on the grounds it did not provide sufficient guarantees to postwar France. Prominent deans of American diplomatic history, from the late William Appleman Williams to Michael Hogan, have shown that the interwar presidents were anything but proponents of Fortress America. Instead, they were at the forefront of the world’s first efforts at arms control and placed America at the center of the Merry-Go-Round system of international finance created after Versailles. (For examples of true isolationism see Tokugawa Japan, Hoxha’s Albania and modern-day North Korea.) Given the malleability of Mr. Trump’s views, he might best be described as a Smoot-Hawley Republican. (Today.)

More importantly, Trump’s arguments about burden-sharing among our allies should not be dismissed. The U.S. may be facing what’s known as the “Lippmann Gap”: with overextension and relative decline, the U.S. is opening itself to predation and potential insolvency. When facing the rise of other great powers such as China, a policy of retrenchment makes more sense than more confrontational approaches, such as preventive war.

Retrenchment is defined “as a policy of retracting grand strategic commitments in response to a decline in relative power.” States have a variety of options on the table, from raising taxes and reducing defense spending, cutting their commitments to the periphery, to shifting burdens to allies to avoiding temptations to engage in or escalate disputes. The Nixon administration and its eponymous doctrine allowed America to draw down on its commitments and forced our allies to take up a greater share of their defense burden while honoring our pledge to defend them against the Soviets. The Carter administration drew down the number of American troops along the Demilitarized Zone (DMZ) with North Korea without instigating a Second Korean War.

One study finds that since 1870, fifteen out of eighteen cases of relative decline resulted in retrenchment. In six of the fifteen cases, the states that pursued retrenchment managed a comeback on the international stage.

Albert B. Wolf is an Assistant Professor of International Relations at ADA University in Baku. He served as a foreign policy adviser to the presidential campaigns of Sen. Lindsey Graham and Gov. John Kasich. He can be followed @albertwolf82.