Will Terrorists be Able to Defeat the US Military in 2035? 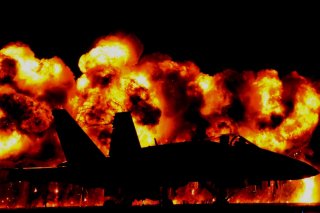 In the world of 2035 and beyond, the United States military could be facing off against private and non-governmental forces that might have the technological wherewithal to go toe-to-toe with American conventional forces. While groups such as the so-called Islamic State exist today, the Pentagon’s Joint Concepts Division is predicting that emerging technologies might enable such entities to not only challenge American power, but also win as time goes on.

“Adversaries will continue developing capabilities to avoid or withstand U.S. technological overmatch,” states a Joint Staff document titled Joint Operating Environment 2035: The Joint Force in a Contested and Disordered World. “Many criminal and terrorist groups are likely to combine relatively cheap, accessible, and potentially disruptive technologies – such as social media, smartphones, 3D printing, robotic and autonomous systems – to degrade or even defeat U.S. systems in the future.”

If the Pentagon’s predictions are correct, non-state actors will be able to galvanize and organize their movements in hours rather than weeks or months. Moreover, new technologies will afford these groups new advanced abilities that the U.S. military has yet to encounter.

Essentially, terrorist groups are likely to weaponize commercial technologies for their own nefarious purposes. “The proliferation of technology and a wide range of manufacturing capabilities in many urban areas will likely continue over the next two decades and might lead to novel advances, to include pervasive intelligence, surveillance, and reconnaissance instruments and relatively cheap and simple, yet effective strike assets such as 3D printed drones or sophisticated IEDs [improvised explosive devices],” the document notes.

In some cases, these new challenges will be an extension of current non-state actor capabilities that have already been demonstrated during recent wars in the Middle East. Islamic State or ISIS—for example—already uses social media to distribute real-time propaganda materials for recruitment purposes. It also makes use of advanced technology in certain areas. Meanwhile, other terrorist entities have demonstrated the use of sophisticated capabilities previously only reserved for state military forces. Indeed, both Hezbollah and Hamas have demonstrated the use of unmanned aerial vehicles.

“Hezbollah was the first to use drones to watch Israeli troop movements in the run up to the Second Lebanon War in 2006. Hamas employed a number of drones during the 2014 Gaza war,” writes Dan Goure, vice president of the Lexington Institute, in a recent article in The National Interest. “ISIS, for example, now routinely employs commercially available drones to perform many of the missions that the United States military does with large, sophisticated and expensive aircraft:  intelligence surveillance, and reconnaissance (ISR), targeting for indirect fire systems, weapons delivery and information operations. ISIS is reported to use drones to help direct vehicle-borne improvised explosive device attacks.”

If the Pentagon’s assessment is correct, the current trend will only accelerate over the next two decades. Essentially, while the information age has brought about many benefits, it has also opened Pandora’s Box—those same technologies are being exploited by bad actors. The Pentagon is now faced with having to adapt to a world where technology is not only advancing rapidly, but also where it no longer has a monopoly on those innovations—thus, the success Defense Department’s Third Offset strategy is crucial to American security.