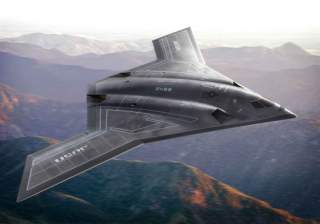 From the time it came into being in 1948, the United States Air Force has had a state-of-the-art long-range bomber in its inventory. The first was the extraordinary B-36 Peacemaker—the name intending to signify its deterrent value rather than (just) being ironic—and the latest is the B-2 Spirit “stealth” bomber. There has been several notable aircraft, not least the B-52, which is now scheduled to have a service life in various versions of an astonishing 90 years. (For a review of the current USAF bomber fleet, see here.)

Bomber aircraft have been an important part of America’s superpowerdom, allowing it to project global air power and forming part of the nuclear deterrent. Some bombers over the years have never seen combat, but others have flown many “hot” missions. So it’s no surprise that a new Long Range Strike–Bomber (LRS-B) system is in development.

The value assigned to long-range bombers by the U.S. is shown in how much it’s spent developing and building them. They’ve frequently been the center of controversy about costs—not just the sometimes eye-watering direct costs but also the opportunity cost of other capabilities foregone. The B-36’s first battle was fought in Washington, with the newly-minted USAF and the U.S. Navy (USN) slugging it out over which Service would carry the strategic nuclear capability. In summary, the USN lost a planned “supercarrier” to fund the bomber. The B-36 was called “the billion dollar blunder” at the time (or $10 billion dollar blunder in today’s money), but at least that referred to the entire program of nearly 400 aircraft. The B-2, by contrast, cost almost a billion dollars each to build—and when the R&D is added in, the 21 aircraft fleet cost $55 billion.

Which begs the question, what might the LRS-B cost? Being a closely-held program, data’s scarce, but the USAF is hoping to keep costs “down” (these terms are relative) to $550 million per aircraft including R&D. Of course, we’ve heard those words before, and anyone who has followed my scribblings will know that historical trends aren’t easily defeated. The F-35 was supposed to be substantially cheaper than the legacy aircraft it was to replace, for example. It isn’t – but it is less expensive than the F-22 which immediately preceded it, so there’s some hope of a better outcome for the LRS-B than we saw for the B-2.

One of the major drivers of cost is likely to be survivability. The B-36 could fly intercontinental distances thanks to sheer size and fuel capacity, and it flew at high altitude, which was supposed to bestow safety from the early jet fighters. However, that supposition was never tested, and it’s highly questionable whether the B-36 had the ability to fight its way through defended skies into the 1950s. In the 1960s, the B-52 proved vulnerable to the relatively modest air defenses of North Vietnam, despite its much higher performance, and almost two dozen aircraft were lost to enemy action. The B-52 fleet might have been able to defeat Soviet defenses in the event of major hostilities, but not without extensive electronic jamming and corridors carved out by prior nuclear missile strikes.

Today, the B-2’s survivability in contested spaces is largely based on stealth, but that’s unlikely to be a winning strategy as sensor technology enabled by vastly increased signal collection and processing capability enables counter-stealth systems. Because being hard to see will always be better than being easy to see, the LRS-B is going to have to be stealthy too, but it will also have a range of other active and passive defense mechanisms, including electronic warfare and (probably) directed-energy systems. And they’ll have to be at the cutting edge—a sure-fire recipe for cost risks to be realized.

The USAF estimates that it can build 100 LRS-Bs for the same cost as its 21 B-2s. But we know how optimistic costs and numbers data can be. While little is known about actual costs to date—or even how much design progress has been made—some analysts are already suggesting a nearly 50 percent cost increase. Worryingly, the Congressional Research Service has already noted that “while standing by that cost, Air Force officials have observed that capping the cost now or in the future is likely to result in limiting some of the LRS-B’s capabilities or restricting the quantity produced.”

Quantity is the likely victim of cost increases. In the early 1990s the USAF had plans for 132 B-2s and 750 F-22s; it got 21 and 187 respectively. While they’re very capable platforms, numbers matter too. Almost certainly, the LRS-B program will cost more and deliver fewer aircraft than the USAF is hoping for. The important question then becomes whether they deliver enough capability to justify the high costs. There are some business cases floating around, and we’ll take a look at those in later posts.