Will Xi Jinping Join the Trump-Kim Summit in Singapore? 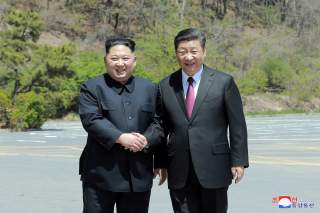 Rumor has it that Chinese President Xi Jinping will be in Singapore at the same time US President Donald Trump and North Korean leader Kim Jong-un are holding the first-ever summit between the leaders of their respective nations.

The summit is set to take place on June 12, in Singapore.

Amid the rumors that have been swirling around the high-profile meeting, this looks highly speculative. Chinese officials have declined to comment on Xi’s travel plans at the time.

The first-ever summit between North Korea and the United States is being talked up as “historic,” with Trump hailing it as a possible game changer for North Korea and the world. The two sides have much to discuss bilaterally – to the point where Secretary of State Mike Pompeo has said that the talks might drag on into a second day.

While Washington has made very clear that Pyongyang’s denuclearization is its foremost priority, it is still not entirely clear exactly what Kim seeks in return: This, it is assumed, will be made clear on the day.

Given that North Korea’s nuclear programs have cost the nation both scarce capital and massive international goodwill, the talks are not expected to be easy. Few expect Kim to accede to Trump’s demands without naming a large price – if, indeed, he agrees to complete, verifiable, irreversible denuclearization (CVID) at all.

China’s interests in Korea, while in some ways aligned with those of North Korea and the United States, are not entirely in sync. Given this, it seems unlikely that Beijing would be invited in to add further complexity to what are already hugely high-stakes negotiations.

A peace treaty signing in Singapore?

However, the Mainichi pointed out that Xi has a compelling reason to join: China, along with North Korea and the United States, were the three signatories to the 1953 Armistice that ended the Korean War. South Korea, which had policy differences with the United States at the time, was not a signatory.

Xi’s presence would suggest that the three leaders may have secretly agreed on a fait accompli outcome to the summit: A peace treaty to end the war.

Despite Beijing-Washington trade frictions, Trump considers Xi “a friend” and has discussed the Korean peninsula with him during bilateral meetings – to the point of being lectured by Xi on Sino-Korean relations over dinner.

Moreover, Beijing has in recent months drastically increased its pull over Pyongyang. In a move that surprised the world, Kim met Xi in Beijing, at the latter’s invitation, prior to his meeting with South Korean President Moon Jae-in. Kim has since met Xi again, flying in for a discussion in Dalian.

Prior to these two meetings, relations between the two leaders were frosty: After Kim executed his point man on Chinese affairs, Jang Song-taek, relations between Beijing and Pyongyang deteriorated, and Beijing applied UN sanctions more stringently than it had done in the past.

Some Chinese commentators have also been playing up the significance of Xi’s involvement, saying Xi can act as a mediator to keep the ball rolling if the talks are held back by conflicting demands; Trump had vowed that he would “walk out” of talks if they are not “fruitful.”

There has also been considerable speculation that Moon could play the intermediary role; he has floated the idea of a trilateral North Korea/South Korea/US summit.

Meanwhile, Singapore’s Straits Times has also reported that the rooms at the two possible venues for the ground-breaking summit – Marina Bay Sands and Shangri-La Hotel Singapore – had all been booked up.

It’s said Trump may pick the unorthodox resort and gaming complex overlooking the bustling Marina Bay, featuring a swimming pool and observation deck piggybacking on a “roof terrace” atop three 55-story hotel and condominium towers, as to return his personal favor to Sand’s CEO and chairman Sheldon Adelson, a long-time donor.

Shangri-La’s rich experience and track record of hosting high-profile forums and détente talks, including the annual Shangri-La dialogue as well as the 2015 landmark talk between China’s Xi and then Taiwanese President Ma Ying-jeou, are all its convincing merits as well.

It’s said Shangri-La’s presidential suite is the only hotel room in the Lion City that conforms to the stringent security requirements to accommodate a US president.