(Withholding) Judgment of the U.S. Missile Strike on Syria 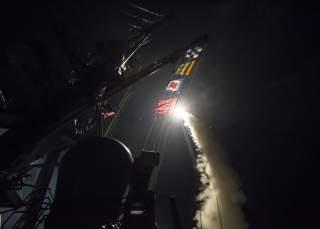 This analyst, like many Syria watchers, is conflicted by the decision by the Trump administration to launch a missile strike on Syrian military targets in response to the regime’s chemical attack in Khan Sheikhoun. On the one hand, any feeling person would welcome the Syrian regime being constrained from future chemical weapons use against its own people. On the other hand, it is unclear the missile strike will achieve that outcome and could invite unintended consequences that risk U.S. reputation, blood, and treasure.

The crux of the problem for an analyst is that the wisdom of the strike is dependent upon future outcomes that are presently unknowable. So rather than pass judgment, analysts would do better to establish the benchmarks by which they will assess this foreign policy decision once the facts are in. The remainder of this article does just that, inviting the reader to consider what she should be watching for.

If we take the secretary’s explanation at face value, then the metric for judging the success of the operation is fairly straightforward. Should Assad refrain from further use of chemical weapons—even if he continues to use other abhorrent tactics including barrel bombs and indiscriminate artillery attacks—then the action was successful in that the change in behavior sought would be realized.

Critics of that logic will say that Assad has other means to kill his people, and they would be right. The regime also has conventional munitions at its disposal including those it has jerry-rigged for added lethality. However, to argue that deterring chemical weapons attacks won’t defang Assad misses the point. Deterring states from using chemical weapons, and particularly chemicals as deadly as sarin, which was the suspected agent in the Khan Sheikhoun attack, is a worthy policy goal even if its stops short of ending other forms of violence against civilians.

A more ambiguous outcome would be if the regime’s chemical attacks and the U.S. punitive responses develop into a cycle in which the regime uses the weapon only to be punished and the tit for tat exchanges continue. Then the U.S. runs the risk of looking feckless even as it deploys military might. The situation would be broadly analogous to the “cheat and retreat” era of 1990s Iraq, in which Saddam Hussein violated agreements (e.g. no fly zones, denying access to weapons inspectors) only to be punished by the U.S.-led coalition, but insufficiently to deter the next violation. The result could be a drawn out exchange that would eventually degrade U.S. military readiness for other contingencies, and like in the Iraq case, could eventually create schisms within the Western coalition between states that support punitive actions and those that do not.

A failed outcome would be if the regime responds to the attack by gradually ramping up its use of proscribed weapons, perhaps starting with less lethal chemical weapons than sarin, and deploying them in smaller scale attacks, until the regime is confident it has eroded the red line enough to risk future sarin attacks. Often referred to by the short hand “salami tactics,” Assad would be eroding the norm one teensy slice at a time and waiting to see if Washington would pull the trigger. Should the administration lack the commitment to respond to this chemical weapons use, then the policy would have failed to protect the international norm and the U.S. could also suffer reputational costs having established a threat it failed to execute.

Goal #2, Strengthen U.S. Bargaining Position: It is also worth considering if the Trump administration’s goal in launching the missile strike could have been more expansive, namely, to strengthen the U.S. bargaining position in future Syria negotiations. The specific logic being that such strikes would drive a wedge between Damascus and Moscow, something hinted at in Secretary Tillerson’s remarks in which he refused to call Russia “complicit” in the chemical attack, even though its forces were present at Shayrat airfield during the time the regime prepared the attack against Khan Sheikhoun. The Trump administration could also be subscribing to the logic that only by demonstrating direct U.S. military force against the Syrian regime will the U.S. have the leverage to ask for concessions at the negotiating table, including an eventual transition away from Assad’s rule.

Similar to the goal of deterring chemical weapons use, success should be measured against the change in behavior sought. Thus, if Moscow signals it has lost patience with Assad or shows additional flexibility in the Geneva or Astana talks, the administration’s calculus would be borne out. Success might look like Moscow pressuring Assad into accepting a cessation of hostilities agreement or diluting the power of the president in a future constitution, for instance.

Conversely, if Moscow doubles down in its defense of Assad or drops out of talks to escalate its military involvement in Syria, then the strike would be counterproductive as judged against the objective sought. And there are examples in the Syria conflict of Russia countering U.S. involvement with greater escalation of its own, rather than accepting the intended effect of U.S. measures on the overall negotiating balance between the parties to the conflict. For example, many speculate that Russia’s escalation of its air strikes in Syria in late 2015 was a reaction to the U.S. allowing more sophisticated weaponry, including anti-tank systems, to reach the moderate opposition, strengthening them on the battlefield.

Whatever the Trump administration’s rationale, there is much to be anxious about as the Assad regime and Russia ponder potential responses. One clue for how those actors might respond is to look at the aftermath of the U.S. military’s accidental strike on Syrian regime forces in September 2016. That strike was far more lethal than the missile attack, claiming the lives of roughly 100 regime soldiers. On the flip side, the U.S. maintained it was accidental, which would theoretically lessen the need for retribution.

The response to the errant airstrike was quick and brutal. Two days after the attack, the regime and the Russians conducted a “double tap” strike on a UN aid convoy, with the second salvo targeting first responders attempting to recover the dead and treat the wounded. In addition to killing more than a dozen aid workers and halting humanitarian assistance into Aleppo, the attack also signaled the effective end of a U.S. initiative in which American and Russian military staff would jointly prosecute air strikes against the Nusrah Front in return for grounding the Syrian Air Force in this zone.

If the regime and Russians return to this playbook, one could imagine that tandem targeting the American-trained Syrian Democratic Forces (SDF) as a response to the U.S. missile strike. The SDF are operating in northern and eastern Syria and U.S. forces are often in proximity to provide the SDF training and mobility. The greatest risk for escalation would be if Moscow or the regime targeted the SDF and—advertently or inadvertently—struck American special operators in the process.

Importance of the Thought Exercise

Foreign policy watchers would do well to subject themselves to a similar thought exercise. Even President Trump’s fiercest critics need to acknowledge the basis on which they oppose his actions. It is too early to judge the wisdom of President Trump’s decision to strike Syria as the relative merit of the operation will be determined by what follows from it. In the meantime, laying out benchmarks for judging its success and failure will hedge against analyst bias of reacting based on a view of the president more broadly, rather than reflecting on the risks and rewards of this particular decision.