World War I: The Real Reason the Great War Happened 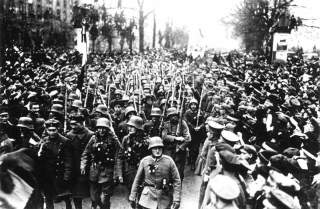 The centenary of the beginning of World War I revealed a deep divide between perceptions of the war held by the general public and historians, at least in the English-speaking world.  Pundits and commentators and politicians routinely opine that World War I was a needless and unavoidable catastrophe, variously attributed to the assassination of Archduke Franz Ferdinand by a Serbian terrorist at Sarajevo on June 28, 1914, runaway arms races, imperialism in general, or “sleepwalking” politicians who stumbled blindly into catastrophe.  The general impression among the broader public is that nobody in particular was to blame for the greatest conflagration in world history before the Second World War.  Literary and cinematic masterpieces like Remargue’s All Quiet on the Western Front and Kubrick’s Path’s of Glory have reinforced the perception that the conflict proved the absurdity of war.  The lesson is that war is like catastrophic climate change—a destructive force that must be avoided and for which everyone is partly to blame.