World War III: This is How the U.S. Military Would Have Invaded Cuba in 1962 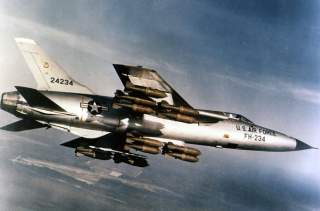 Image: Republic F-105D-30-RE Thunderchief (SN 62-4234) in flight with a full bomb load of M117 750 lb bombs. Normally drop tanks were carried on the inboard wing pylons. This aircraft was shot down on 24 December 1968 over Laos while being assigned to the Wing Headquarters, 355th Tactical Fighter Wing, Takhli RTAFB. Major Charles R. "Dick" Brownlee was the pilot of the lead aircraft (s/n 62-4234, call sign "Panda 01") in a flight of four. / Wikimedia Commons