Would America Really Start a Nuclear War over a Cyber or Satellite Attack? 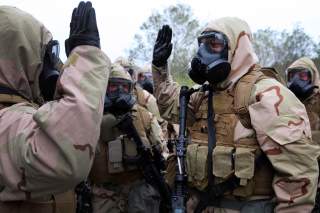 Critics say that a draft nuclear policy, which suggests the U.S. could use nuclear weapons to respond to a massive cyberattack or an attack on U.S. satellites, is a hollow threat. According to the January 2018 draft Nuclear Posture Review:

The President will have an expanding range of limited and graduated options to credibly deter Russian nuclear or non-nuclear strategic attacks, which could now include attacks against U.S. NC3[nuclear command, control and communications], in space and cyber space. These requirements put a premium on the survivability, flexibility and readiness of Western nuclear and non-nuclear capabilities to hold diverse types of Russian targets at risk throughout a crisis or conflict, and point to the continuing great value of the flexibility inherent in the combination of the U.S. nuclear Triad, U.S. and other NATO non-strategic nuclear forces deployed in Europe, and the nuclear forces of our British and French allies.

Not so fast, warns arms control expert James Acton, codirector of the Nuclear Policy Program at the Carnegie Foundation for International Peace. Suppose Russia or China did attack U.S. satellites, or launched a massive cyberattack against the electrical grid? Would an American president really retaliate with nuclear weapons? The choice would be between unleashing the nukes and risking global Armageddon—or backing down and ruining U.S. credibility.

"In this case, threatening to use nuclear weapons is completely disproportionate," Acton says. "There is no credibility there."

The new policy is supposed to be the Trump administration's fresh look at nuclear weapons. But the draft Nuclear Posture Review sounds like a return to the notorious Massive Retaliation policy of the 1950s, in which the Eisenhower administration stated that it reserved the right to respond with nuclear weapons to a conventional Soviet attack, such as an invasion of Western Europe. The problem was that Massive Retaliation meant convincing the Soviets that the United States would would risk losing New York and Los Angeles to save West Berlin or South Vietnam. Once the Soviets began to deploy ICBMs by the early 1960s, which could devastate the United States in hours, Massive Retaliation lost its credibility.

Then there is the draft policy's call for developing a low-yield nuclear warhead for submarine-launched missiles, in response to indications that Russia is contemplating use of small nuclear weapons in conflicts less than all-out war. Russian belief that "limited nuclear first use, potentially including low-yield weapons, can provide such an advantage is based, in part, on Moscow’s perception that its greater number and variety of non-strategic nuclear systems provide a coercive advantage in crises and at lower levels of conflict," according to the document.

For the most part, nuclear arms have been seen as existential weapons to be used when the very life of a nation is at stake, which helps to explain why the superpowers didn't destroy each other and the world during the Cold War. But their use for low-stakes conflicts makes these dynamics more unpredictable, according to Acton. For example, suppose Russia invades one of the Baltic States, and NATO intervenes with conventional forces. For NATO, the stakes wouldn't justify using nuclear weapons. But for an authoritarian government like Russia, the domestic consequences of a failed invasion might make the nuclear option more tempting.

While Acton believes that having low-yield American weapons is not unreasonable given alleged Russian policy, he also points out that the United States already has the B-61 nuclear bomb, which can be set for low yield. Acton suggests that rather than funding what would be a redundant weapon, Congress should insist on modernizing U.S. nuclear command-and-control systems.

As for the prospect of negotiating limits on low-yield nuclear weapons, Acton notes that while Washington and Moscow might be able to count the number of nuclear missiles and warheads the other side possesses, determining the yield of those warheads is a different matter. "Verification is unbelievably difficult," he adds.