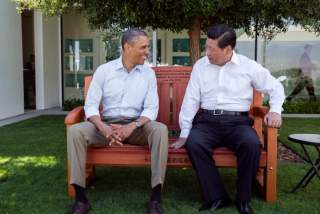 U.S. president Barack Obama and Chinese president Xi Jinping will meet this week, in a state visit by the American president to the People’s Republic of China (PRC) on the eve of the APEC Summit. Counting side discussions at multilateral conferences, this will be the fourth meeting between the two presidents—a remarkable, and even laudable, track record of top leaders interacting with each other.

Opening lines of communications, having an opportunity to exchange views…these, in the main, are not bad things. The past various meetings have allowed both sides to reiterate points of concern. For the United States, this has meant emphasizing the importance of limiting nuclear proliferation (especially on the Korean peninsula and Iran), military-to-military relations and climate change. For the PRC, it has meant pushing for a “new model of great-power relations” in which the two sides express respect for each other’s “core interests.”

What is problematic is when neither side has much of an agenda. President Obama will be in Beijing for the annual meeting of APEC (Asia Pacific Economic Cooperation) leaders. Absent this standing commitment of all U.S. presidents, it’s not clear that President Obama has much reason to be in Beijing. As long as he’s there, however, the president is arguably obliged to have a bilateral meeting with Xi. (That it is a “state visit” is probably at the insistence of the Chinese).

Unfortunately, summits for the sake of summits are hardly a productive use of senior leaders’ (and their staffs’) time. Worse is if one side does have an agenda, and the other side either does not, or has a different one. On those occasions, the prospects for misunderstanding or unmet expectations are far greater.

The June 2013 Sunnylands summit was touted as a “shirt-sleeve summit”—a summit without talking points or a formal agenda. American officials hoped that Presidents Obama and Xi would “really get to know each other, while exchanging ideas about how best to manage a complex, sometimes combustible relationship.” Yet, rather than bring the two leaders together, the Chinese chose to stay at the Hyatt in town, rather than at the Annenberg estate (the site of the summit)—pointedly questioning the electronic security of the venue. As Edward Snowden had already made his way to Hong Kong, the Chinese decision made clear that they had no intention of engaging in “informal” discussions about things like cybersecurity. This contradicted the entire point of the summit, and was likely not an oversight on China’s part. Indeed, it may well have been part of Beijing’s messaging.

This week’s summit is likely to be a study in contrasts.

For President Obama, now in the final two years of his final term, the question is what, if anything, can he deliver or promote. That question became even more difficult when the midterm elections gave Republicans control of the Senate.

While the Obama administration has highlighted its strategic “pivot to Asia,” few in Washington think the commitment—with the possible exception of engagement with Southeast Asia—is substantially greater than that of the previous administration. Secretary of State John Kerry has spent far more time in the Middle East trying to broker a solution to the Israeli-Palestinian problem than in East Asia. Neither Susan Rice, nor Samantha Power, longtime Obama confidantes, are seen as Asia hands, nor as especially focused on the region. With this as background, President Obama will again (like many Presidents before him) be pressed to declare and demonstrate American staying power.

President Xi, meanwhile, is coming out of the Fourth Plenum of the 18th Party Congress, which supported his continuing anti-corruption push by nominally promoting a greater emphasis on the role of the law in Chinese governance. Xi’s ongoing anti-corruption efforts have almost certainly aroused criticism (if not worse) within the Chinese Communist Party (CCP), but they have also heightened his populist appeal, and are difficult to criticize. (After all, who is for corruption?)

As important, this summit occurs against the backdrop of an overall Chinese strategic offensive across the region. The past year has seen the Chinese: declare an East China Sea Air Defense Identification Zone; deploy a deep-sea oil drilling rig in disputed waters off Vietnam’s coast; deploy nuclear and conventional submarines to the Indian Ocean; increase their presence around the disputed Senkaku islands and send troops into disputed territory held by India. At the same time, China has pushed for the creation of an Asia Infrastructure Investment Bank (which it would dominate) and is promoting the Regional Comprehensive Economic Partnership plan.

Despite the widely touted “pivot,” the United States, by contrast, appears to be far less sure-footed. Sequestration has meant limits on U.S. deployments and training. The American invitation to China to join in the multinational RIMPAC exercises resulted in not only an official Chinese participating force, but an uninvited Chinese intelligence ship as well. American intelligence flights have been openly challenged, including dangerous approaches to both American ships and aircraft. Meanwhile, President Obama has not employed his “bully pulpit” to support the Trans-Pacific Partnership.

In this light, one might well hope that the result will be a “Son of Sunnylands,” a meeting about little other than the two sides continuing to get to know each other. But there is a far more dangerous possibility: that this will be a replay of the 1961 Vienna summit between John F. Kennedy and Nikita Khrushchev. President Kennedy concluded that he had been “savaged” by Khrushchev, who apparently concluded that Kennedy was weak and vulnerable.

President Obama is not a newly elected president. But Xi almost certainly has a better understanding of American politics than Khrushchev did.