Yes, Japan Could Build Nuclear Weapons (But at What Cost?) 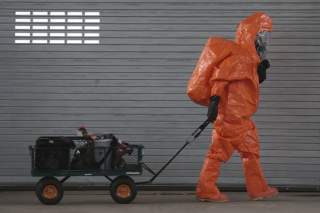 North Korea conducted its fifth nuclear test on September 9, leaving its non-nuclear Asian neighbors vexed. Japanese Prime Minister Shinzo Abe termed it “totally unacceptable” and has called for strict sanctions. But the international fear of North Korea’s nuclear tests triggering a chain of nuclear tests in East Asia or the rise of a nuclear tsunami seems to have been dispelled with the United States’ Asian allies favoring “strategic assurance.”

Japan and South Korea are American treaty allies. Both have given up the nuclear option in exchange for protection under the US nuclear umbrella. Despite possessing the technical capacity to go nuclear, Japan hasn’t displayed intent yet. South Korea’s nuclear ambitions have been repeatedly thwarted by the CIA.

North Korea’s nuclear provocations and belligerent policies immediately put a spotlight on neighbors like Japan and South Korea. In 1991 Kenneth Waltz famously predicted that Japan would develop an independent nuclear deterrent as a result of an emerging multipolar international system. The North Korean case resurrected this argument — that the proliferation of weapons of mass destruction legitimises Japan’s bargaining power for nuclear protection.

If Japan did decide to go nuclear, there are five critical calculations it must keep in mind.

First, Japan would have to overrule its institutional commitment to the ‘three non-nuclear principles’ declared in 1967 by then prime minister Eisaku Sato as a response to Chinese nuclear tests. This entails that Japan will not produce, possess or position nuclear weapons on its soil. A reinterpretation of Article 9 of the constitution would also be required, which currently does not allow for the maintenance of war potential and offensive weapons.

Japan’s constitution allows for a ‘minimum level of force’ necessary for self-defense. In the past, leaders from the Liberal Democratic Party of Japan have argued in favor of producing tactical nuclear weapons for self-defense purposes. But Japan is part of the Nuclear Non-Proliferation Treaty (NPT). To develop an independent deterrent capability, Japan would have to instigate Article 10 of the NPT to withdraw in light of “extraordinary events.” This path would severely damage Japan’s diplomatic capital, which hinges on a rigorous pursuit of disarmament diplomacy.

Second, a Japanese shift in nuclear policy would mean backtracking from its vigorous disarmament and non-proliferation strategies. As the only country to be the victim of an atomic bombing, Japan has developed a sense of nuclear aversion that stems from a moral and political rationale. Apart from Hiroshima and Nagasaki, Japan was also a victim of radiation during the 1954 Bikini Atoll incident when the United States tested a hydrogen bomb in the Marshall Islands. Both the institutionalization of peace education and the coalescence of discourses regarding pacifism and nuclear aversion pose a strong block on Japanese leaders arguing for the development of nuclear weapons.

Third, Japan’s development of nuclear potential would significantly impact its security alliance with the United States. In 1968 Eisaku Sato defined Japanese nuclear policy based on four pillars, which included a reliance on US extended deterrence. Japan breaking out would mean undermining the foundations of the alliance which have become hardwired into the strategic landscape of the region. Japan’s own security policy would also have to be seriously modified.

Fourth, Japan would have to factor in the political ramifications of such a decision, particularly with respect to its relationships with China and South Korea. The outbreak of conflict between the world’s second and third largest economic powers would be catastrophic. China’s creeping operations in the South and East China Sea could also expand if Japan developed its strategic capabilities. Additionally South Korea may demand its own deterrent capability, which would drastically transform the strategic landscape of East Asia.

Last, the domestic consensus on Japan’s nuclear policy would lose stability. During 1968–70 and 1995 Japan conducted domestic debates on the issue, but studies revealed the expensive trade-offs involved with such a pursuit (including the lack of strategic depth). Recently Japan has invested in strengthening the credibility of the US alliance and sought to bolster its alliance contributions through the revision of the US-Japan Defense Cooperation Guidelines in April 2015 rather than simply ‘relying’ on the US nuclear umbrella. Japan and the United States also began holding regular bilateral nuclear deterrence dialogues in 2010 to enhance allied deterrence.

The political cost of going nuclear has become more complex in the 21st century. Japan has looked towards strengthening its insurance policies such as dependence on multilateral regimes and emphasis on US extension of its deterrent when dealing with nuclear threats. Japan’s nuclear insurance against North Korea lies in the strategic assurance of the US nuclear umbrella and the multilateral regimes currently in place.