Yes, Tensions are Rising Between Japan and Taiwan (And it Really Matters) 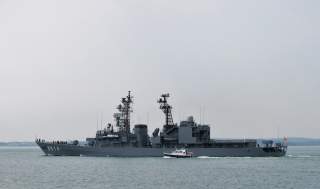 While tensions continue to rise in the South China Sea and the disputing governments nervously await a decision in the Philippines’ arbitration case against China, an important sideshow has arisen between Japan and Taiwan in the central Philippine Sea.

On April 24 Japan’s Coast Guard arrested a Taiwanese fishing vessel and its crew for fishing in waters that Japan claims are part of its 200-nautical mile ‘exclusive economic zone’ (EEZ) under the United Nations Convention on the Law of the Sea (UNCLOS). Japan’s EEZ claim is based on its control over two tiny rocks surrounded by a coral reef more than 1000 miles south of Tokyo. Although Japanese military patrols began chasing Taiwanese fishing boats away from the area two years ago, this was reportedly the first actual detention since 2012.

The Taiwanese government lodged a strong protest against the recent Japanese action. To obtain the release of the ship and crew the Taiwanese ship-owner posted a security bond, in effect a fine, with the Japanese government. The incident infuriated public opinion in Taiwan.

The detention of the ship occurred some 150 nautical miles from the Okinotori islands in an area where as many as 200 Taiwanese fishing boats operated safely in the past. The influential Taiwan fishing community demanded the return of the security deposit, reimbursement for business losses incurred and an apology to the ship’s captain, who was allegedly subjected to a strip search.

Increasingly influential Taiwanese nationalists called for a strong reaction to Japan’s interference with Taiwanese perceived fishing rights in an area Taiwan deems to be part of the ‘high seas’ rather than Japan’s EEZ. President Ma Ying-jeou, himself an expert on the law of the sea, promptly dispatched several armed patrol boats to protect Taiwanese fishermen in the area, some 860 nautical miles away. Taiwan’s Coast Guard announced that it would follow a policy of “no evasion, no confrontation and no provocation” and hoped for a peaceful, rational solution. But it added that it would “take responsive measures” against any unfriendly Japanese actions.

Almost immediately, Beijing also rejected Japan’s claim that Okinotori is entitled to an EEZ. China’s foreign ministry’s spokesperson maintained that Okinotori is just “a collection of rocks” far from the Japanese homeland and “it is illegal for Japan to claim areas around the Okinotori Atoll as its continental shelf or EEZ [because] less than 10 square meters of the rocks are above sea level at high tide.”

Citing UNCLOS Article 121.3 the spokesperson pointed out, “rocks that cannot sustain human habitation or an economic life cannot have EEZ or continental shelf status.” And the spokesperson emphasised that in 2012 the UN Commission on the Limits of the Continental Shelf did not adopt Japan’s claim that Okinotori is entitled to a continental shelf, implying that this constituted authoritative, if implicit, recognition that Okinotori is not entitled to an EEZ.

Beijing and Taipei are surely correct in rejecting Japan’s claim. The idea that Okinotori is entitled to control the economic resources of a sea covering roughly 150,000 square statute miles, an area about the size of Japan itself, has always been preposterous. No matter how generously the Philippine arbitration tribunal might interpret the terms of UNCLOS Article 121.3 in the context of the South China Sea, it will not justify Japan’s claim.

Perhaps the Okinotori incident should serve as an opportunity for all states to reconsider their approach to claiming resource zones at sea. In both the East and the South China Seas, China makes equally outlandish resource zone claims when it draws baselines around the Paracel and Senkaku/Diaoyu islands. And China claims fishing rights based on its nine-dash line that have no basis in international law.

Japan’s absurd definition of what constitutes an island entitled to resource zones and China’s equally absurd resource zone claims are unpersuasive attempts to capture more water space than either is entitled to. Yet the United States should be careful before it levels criticisms. It also claims questionable resource zones around a few remote, tiny Pacific features — such as the Howland and Baker islands.

How is the Okinotori dispute likely to end? The jockeying between Taiwanese and Japanese coast guard vessels promises to be more kabuki (theatre) than conflict.

In the absence of formal diplomatic relations between the two governments, ‘unofficial’ intermediaries have already begun to play a role. Informal associations linked to both countries’ respective foreign ministries have stated their desire to negotiate the matter in a peaceful, low-key manner. There have even been hints they might try to sign an agreement similar to their imaginative 2013 fisheries pact in the Senkaku/Diaoyu area.

There has also been higher-level informal discussion. On May 6 President Ma met with Prime Minister Shinzo Abe’s younger brother, himself a member of Japan’s Upper House, and expressed the hope that both sides could find a solution. “If it doesn’t work out,” Ma said, “I hope we can let international mediation or arbitration bodies help us resolve the dispute.”

The stage is plainly set for a potentially momentous arbitration decision in the South China Sea. As the decision will likely clarify the law concerning what is required for an island to receive a resource zone, its impact will reach far into the Pacific to touch many other countries’ maritime claims — including Okinotori. How exactly the decision will influence these claims remains to be seen.

Jerome A. Cohen is Director of the US-Asia Law Institute, an NYU law professor and adjunct senior fellow for Asia at the Council on Foreign Relations.

Peter A Dutton is Professor and Director of the China Maritime Studies Institute, US Naval War College.