Your Great-Grandchildren Will Still Fly F-35s in 2070 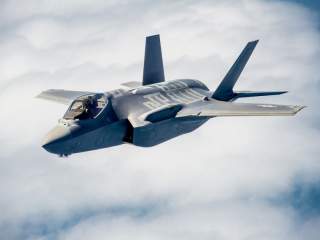 Imagine if the iconic World War II-era North American P-51D Mustang had served the U.S. Air Force into the late 1990s. Generations of pilots and maintainers would have worked the storied fighter that helped to rid the world of Nazi Germany. Pilots, their parents and even their grandparent—possibly their great grandparents—might have flown the very same aircraft.

But while the P-51—which flew in the 1940s and was retired from the last reserve units by 1957 (active duty squadrons having moved on long before)—served operationally for about fourteen years, the Pentagon is projecting that the Lockheed Martin F-35 Joint Strike Fighter will be flying until 2070. That means the aircraft would have been operational for a total of 55 years by the time it is retired. It’s entirely possible that the parents of the last F-35 pilot have not been born yet.

Just yesterday, the Pentagon announced that the new stealth fighter’s life span is being extended by six years from 2064 to 2070. Indeed, the fiscal year 2015 selected acquisition report to Congress shows that the sustainment cost for the F-35 will rise by 6.8 percent to $1.5 trillion partly as a result of the increased number of flight hours.

There is some good news—the aircraft’s total procurement cost estimates are dropping by a total of $7.5 billion. Operations and sustainment (O&S) costs also dropped by between two and four percent—according to a statement from Lt. Gen. Chris Bogdan, the program executive officer for the F-35. “These O&S reductions were the result of improved maintainability and sustainability as the weapon system matures, the design stabilizes and maintenance of the aircraft becomes more efficient and effective,” Bogdan said. “However, these O&S cost reductions were overshadowed by the U.S. services' changes to aircraft life expectancy and beddown assumptions which added about $45B to the 2015 estimate. Without the additional 1.6 million hours and six years of operations, F-35 life cycle O&S costs would have decreased by about $22B from last year's estimate.”

“Although there is a tendency to focus on the large projections six decades from now, many of the assumptions used to estimate costs that far into the future are beyond the JPO’s control,” Bogdan said. “The JPO is focused on reducing real, near term costs through many affordability initiatives that will have lasting impacts.”

But while the costs are unpredictable, so too is the future international security environment. As many senior defense officials have testified before Congress, Russia and China are rapidly closing the technological gap with the United States—at rates much faster than predicted. The fact is that the F-35’s design was set in the early 2000s—there is only so much the Pentagon and Lockheed can do to improve its stealth, which is about eighty percent dependent on shaping.

Over the next half-century, the Russians and Chinese will almost certainly develop ways to counter the F-35—indeed, there are indications that they already have. As Air Force Col. Mike Pietrucha writes in War on the Rocks:

“In the meantime, we have been technologically outmaneuvered by both Chinese and Russian air defense designers, as we double down on a technology that gave us a decisive advantage a quarter century ago. We are building the combat air force for the wrong attributes, and we are unlikely to reconsider this path as long as the Air Force remains stuck in denial.”