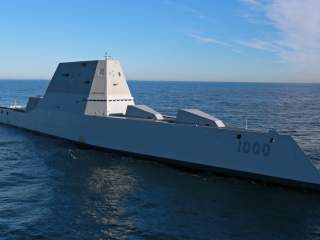 The U.S. Navy’s future USS Zumwalt (DDG 1000) is underway in the Atlantic conducting its first sea trials in the open ocean. The Navy and the General Dynamics Bath Iron Works are testing the ship before it is delivered to the service.

The December 7 sea trials—which fall on the anniversary of the Japanese attack on Pearl Harbor—started after a series of tests at the shipyard in mid-October. “We did everything from rolling the shafts, bringing up and down systems, testing failure modes, testing watch station effectiveness,” said Sean Stackley, assistant secretary of the Navy for research, development and acquisition, in an interview with Defense News last month. “You’re limited in terms of radiation—radiating things while next to the pier. But we did everything that we could next to the pier prior to getting underway.”

According to the Navy, the massive stealth warship—roughly the size of a World War II-era cruiser—is the largest destroyer ever built for the service. While its sharp lines and size appear impressive, the Zumwalt is effectively a program to demonstrate what is possible with leading-edge technology. The Navy will only build three ships because of their high cost and their inability to provide ballistic missile and area air defense capabilities. The service also has concerns about the stability of the ship’s hull in rough seas.

The roughly 15,700-ton vessel has been years in the works and features a host of new technologies including an Integrated Power System—which generates 100 percent of the electricity needed for each vessel's propulsion, electronics and weapons. According to Raytheon—one of the key subcontractors—the system provides 58 MW of reserved power while “steaming” at 20 knots.

Advanced Induction Motors (AIM) provide the actual propulsion for the ship using electromagnets to turn the drive shaft. The Zumwalt was originally expected to use much more capable and compact permanent magnet motors—but the development program failed to deliver. The next application for such technology is the Ohio Replacement Program ballistic missile submarine.

The Zumwalt also features a “Total Ship Computing Environment,” which is a single, encrypted network that controls all shipboard computing for everything from machinery controls and the radars to its weapon systems. It also has a pair of 155 mm guns capable of firing long-range projectiles that can strike a target sixty-three nautical miles away. Its eighty missile tubes carry a variety of naval missiles including the Standard and Tomahawk.

Its mission systems will be installed later in California once the ship is transferred to San Diego. Bath Iron Works—which builds the ship in Maine—is only responsible for the ship’s hull and its mechanical and electrical systems. The mission systems—which include the ship’s combat systems, radars and other sensors—are Raytheon and BAE Systems’s responsibility. “This two-phased delivery approach has been in place since the contract was first struck,” Stackley said.

The Navy plans to build only three DDG-1000s. Originally, it had planned to build thirty-two ships. That number was later reduced to twelve, and then to just three. The Navy simply couldn’t afford the ship’s astronomical price tag—each vessel costs roughly $4 billion not including research and development. Total program costs are near $23 billion.

Additionally, the DDG-1000 design is not particularly well suited for the ballistic missile defense role. The ship relies on the AN/SPY-3 X-band active electronically scanned array radar—which can provide guidance for the SM-2 and the Evolved Sea Sparrow, but it can’t provide area air defenses because it lacks volume-search capability. Originally, the ship was supposed to have an S-band radar as part of an integrated dual-band system called the SPY-4—but that ran into technical trouble and cost issues. It was removed in 2010. The Zumwalt also requires a slightly modified version of the Standard missile to be compatible with the vessel’s fire-control system—which is a logistical problem.

The dual-band radar was superseded by the Gallium Nitride-based technology, which will be used on the Flight III DDG-51’s Air and Missile Defense Radar. Because of the growing ballistic missile threat, the Navy has opted to build Flight III DDG-51s instead of more DDG-1000s. But the DDG-1000’s technology will live on and will likely be used on a new Future Surface Combatant.