The Most Dangerous Nuclear Threat No One Is Talking About 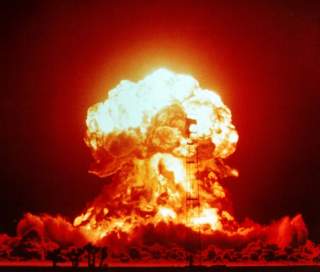 While Iran and North Korea’s nuclear programs are all the rage these days, the most dangerous nuclear threat facing the world continues to go largely unnoticed.

Namely, China and India are both on the cusp of deploying multiple independently targetable reentry (MIRV) vehicles on their ballistic missiles, a development that is likely to have profound, far-reaching consequences for the region and beyond.

MIRVed missiles carry payloads of several nuclear warheads each capable of being directed at a different set of targets. They are considered extremely destabilizing to the strategic balance primarily because they place a premium on striking first and create a “use em or lose em” nuclear mentality.

Along with being less vulnerable to anti-ballistic missile systems, this is true for two primary reasons. First, and most obviously, a single MIRVed missile can be used to eliminate numerous enemy nuclear sites simultaneously. Thus, theoretically at least, only a small portion of an adversary’s missile force would be necessary to completely eliminate one’s strategic deterrent. Secondly, MIRVed missiles enable countries to use cross-targeting techniques of employing two or more missiles against a single target, which increases the kill probability.

In other words, MIRVs are extremely destabilizing because they make adversary’s nuclear arsenals vulnerable to being wiped out in a surprise first strike. To compensate for this fact, states must come up with innovative ways to secure their deterrent from an enemy first strike. This usually entails increasing the size of one’s arsenal, and further dispersing to make it more difficult for an enemy to conduct a successful first strike. For example, when the U.S. first deployed MIRVed missiles in 1968, the Soviet Union had less than 10,000 nuclear warheads. A decade later, however, it had over 25,000 (of course, the Soviet Union deploying its own MIRVed missiles incentivized expanding the size of its arsenal since more warheads were needed per missile).

With regards to China and India, then, the introduction of MIRVed missiles could have profound consequences of both of their nuclear postures. One of the most remarkable aspects of every nuclear state not named Russia or the United States is they have relied on an extremely small nuclear arsenal to meet their deterrent needs. This is especially true of India and China who have generally maintained minimum deterrence and no-first use doctrines. With the introduction of countervailing MIRVed missiles, however, there will be strong incentives on both sides to vastly increase the size of their arsenals if any to guard against the threat of a first strike by the other side.

Of course, the consequences of China and India acquiring MIRVed missiles would not be limited to those states alone. Most obviously, India’s acquisition of MIRVed missiles would immediately threaten the survivability of Pakistan’s nuclear forces. In the short-term, this will probably result in Islamabad further dispersing its nuclear arsenal, which in general will leave it more vulnerable to Islamist terrorist groups in the country. Over the long-term, Pakistan will feel pressure to expand the size of its arsenal as well as acquire MIRVed capabilities of its own.

The same pressures will be felt in Moscow. Since the disintegration of the Soviet Union, Russia has relied on its vast nuclear arsenal to compensate for its relative conventional weakness. In the eyes of Russian leaders, this will only grow more necessary as China continues to modernize its conventional military forces. Currently, Russia holds vastly more nuclear warheads than China, which is a source of relief for Moscow. As China MIRVs its missiles, however, as well as likely builds up the size of its arsenal, Moscow will see its nuclear superiority over Beijing rapidly erode. It can be counted on to respond by abrogating its arms control treaties with the United States, and expanding its own arsenal as well. In such a situation, a U.S. president would come under enormous domestic pressure to meet Russia’s buildup warhead for warhead.

Thus, while the prospect of North Korea and Iran acquiring operationalized nuclear arsenals may be concerning, China and India’s MIRVed missiles present far greater threats to the world.