3 Keys to the Neocons' Plan B on Trump 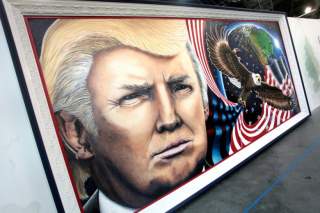 July 21 was the most important day of Donald Trump's brief career as a politician. Thirteen months after he first announced his intention to run for President of the United States against snickers from the Republican establishment and eye-rolls from Democrats who thought the entire ordeal was an elaborate bid for self-promotion, Trump stood on the stage in front of thousands of GOP delegates and formally accepted the party's nomination for president.

Certainly not the neoconservative and hawkish wing of the Republican Party. In their defense, there was very little reason why Republicans like Speaker Paul Ryan, Sens. John McCain, Lindsey Graham, Kelly Ayotte, Tom Cotton, and neocon writers like Bill Kristol, Steve Hayes, and Robert Kagan would be able to predict that someone as inexperienced as Donald Trump would win any states, let alone the nomination of a major political party. And even if Trump miraculously won a couple of states and a couple hundred delegates, McCain, Graham, the Bush family and Elliott Abrams could sleep soundly at night with some degree of confidence that other candidates in the race more to their liking—people like Florida senator Marco Rubio, New Jersey governor Chris Christie, or even Texas senator Ted Cruz—could stop the Trump train before it crashed through the Republican palace.

We all know how that plan went.

Now that Trump is atop the Republican Party structure, national-security hawks who have voted Republican for decades are shivering out in the cold and wondering what the heck they can possibly do to get back into the clubhouse. Job number one for this crowd is getting through to Trump's inner-circle of less-than-stellar national security advisers in the desire to drill home a central message: American exceptionalism is what keeps the world safe and prosperous and makes Washington the greatest moral authority on the planet. Dimming the “shining light” that illuminates the hill during a time of darkness is tantamount to a unilateral disarmament and a dangerous abdication of the American leadership that has served as GOP foreign-policy orthodoxy for the past fifteen years.

We can expect Republicans in the Reagan and George W. mold to influence the billionaire in a number of ways and through a variety of forums:

- Push the House GOP Agenda: On June 9, Speaker Paul Ryan, Majority Leader Kevin McCarthy, and the House Republican conference released a national-security strategy paper as part of their A Better Way agenda for the election year. While the document is essentially a rehash of what you would expect from conservative Republicans—reinvigorating America's global leadership; countering Russia's military posture near the borders of NATO's eastern partners; acting unilaterally even when action may be opposed by the rest of the U.N. Security Council; meeting Washington's commitment to deposing Bashar al-Assad's regime in Syria—it nonetheless reveals that the House Republican leadership is still dominated by a certain degree of muscular unilateralism. We should expect Speaker Ryan and his team to encourage House Republicans running for office this fall to use the Better Way agenda to both distance themselves from Donald Trump and demonstrate to the GOP presidential nominee that many of his foreign-policy views (especially on Russia and NATO) still need work.

- More op-eds: Whether or not Donald Trump will listen to any outside opinion is up for debate, but the Republican establishment will certainly try. The major newspapers in the country will be filled with columns and op-eds from hawkish members of past Republican administrations about what a Trump administration should focus on as top priorities during its first one hundred days and why is it imperative that Trump check his populist and anti-interventionist rhetoric at the Oval Office door. Some of these pieces will be written to portray Trump as a foolish novice on U.S. foreign policy and as a buffoon and blowhard who will make the liberal international order far more despotic.

- Lobby Trump's People: Trump may be the Republican nominee, and he could very well be President of the United States after November 8, but Trump will need good people—indeed, “the best people”—to staff top national-security posts in the State, Defense, and Treasury Departments and in the intelligence agencies responsible for protecting America from all kinds of dangers. If news reports are accurate, Trump will rely heavily upon some members of his family for advice. But “the Donald” is not going to appoint Ivanka Trump Secretary of State or Donald Jr. Secretary of the Treasury; he will need professionals who have been in the business long enough to know how the national-security bureaucracy works. If neocons won't be controlling the White House, they will at least want some of their own to represent them around the table during National Security Council meetings. For the neoconservative faction that has been trying to get back into an administration after eight years of Barack Obama, beggars can't be choosers.