The Fallacious Claim of Lacking Air Support in Afghanistan 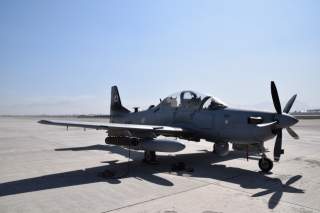 The Afghan National Defence and Security Forces frequently complain that they are unable to capture Taliban positions without air support and that such support, if it arrives at all, is insufficient. However, a recent episode in a mountainous part of Afghanistan suggests that these claims might be fallacious and that the real problem lies somewhere else.

In early August, staying in Ziraki, the centre of Raghistan, a remote district located among the hilly high pastures of the mountains of Afghanistan’s northeastern province of Badakhshan, I hear the sound of a distant aircraft coming closer. It is, however, not the sound of the rotors of the Russian-made Mi-17 transport helicopter that I was hoping for to hitch a ride out. It is the low hum of a high-flying turboprop aircraft.

Like the other men – all Afghans, be it pro-government vigilantes, soldiers or ordinary local residents – I search the cloudless light blue sky for the plane. Given its flight altitude it takes me a while to spot it. When I finally see it, it is so tiny that I can just make out the shape of a fixed-wing aircraft. But the circumstances make the designation simple: given that there is no airstrip up here where a small transport plane like the Afghan Air Forces’ Cessna 208 Caravan could land and that the international coalition does not field any turboprop attack aircraft in Afghanistan, it has to be one of the A-29 Super Tucanos. The Afghan Air Force received the first eight of a total of twenty such light attack aircraft from the United States of America in January and March of this year. I lose sight of the aircraft, but still hear it circling around to the north of my position, arguably doing reconnaissance.  There is also, most probably, a second A-29 in the sky. Then, the distant thunk of a loud explosion rips through the steady, monotonous hum. Afterwards, the planes continue to circle above the area and the sounds of other explosions follow. In total, the A-29s drop at least six bombs on insurgent positions before they leave and the sky is once again quiet.

Earlier, soldiers and commanders alike insisted that there is no way to take the insurgent sangars without air support – sangar is the Afghan term for fortified positions that are here on the tops of some of the countless hills that stretch in every direction between the craggy rocky mountains on the far horizon. According to consistent accounts, among them one from a defector that has spent several months with the Taliban and has reportedly seen the sangars himself, the insurgents have built extremely elaborate bunkers with underground firing positions. Protected by up to three metre thick earthen (not rock) walls and ceilings, sometimes reinforced with wood, they are mortar and rocket-proof, the commanders assert. Given that the government positions that I have visited and which were only recently recaptured from the militants had at best a few very short and shallow trenches, claims about the sophistication of the insurgent sangars seem exaggerated. But is is nonetheless likely that the insurgents have indeed dug underground facilities that are able to withstand incoming mortars and RPGs. An officer of the National Directorate of Security, the Afghan intelligence service, at least qualifies that the militants only have a handful of well-built sangars, with the vast majority of their positions only crudely, if at all, fortified. Claims that even the rockets that the Mi-25 helicopter gunship fired during the past days had no effect on the sangars, seem harder to believe; in particular as only some soldiers insist that the rockets had actually hit their targets, while others said that the rockets simply did not strike exactly and that this was the reason for the lacking effect. Be that as it may, everyone was crying for “jets.”

They did not get “jets”, but the A-29s. And – contrary to the helicopter gunships – there is little doubt that the bombs of the A-29s hit their targets, as this was confirmed by all sources on the ground. One commander of the Afghan National Civil Order Police (ANCOP) was so enthused by the A-29s precision that he could hardly stop talking about it, at one point saying that “they were more accurate than a Kalashnikov.” While it is not clear what kind of ordnance the A-29s released in Raghistan, Brigadier General Charles Cleveland, deputy chief of staff for communications of the international coalition in Afghanistan, stated on June 1 that the use of precision-guided munitions by the Afghan A-29s “is in the forecast and we expect to see that in the coming months.“ All accounts also agreed that one of the targets was one of the allegedly best fortified Taliban positions called Kandavon, that is only separated from the district centre Ziraki by a hill range. The bombardment reportedly damaged the sangar, killing some insurgents and routing out the others. However, the Taliban nonetheless did not lose Kandavon. So what happened?

Instead of storming the sangar directly after the last bomb had hit its target, it has taken government forces reportedly between 30 and 60 minutes to do this, as several accounts confirmed. The reasons was – according to various commanders and despite direct radio contact between the A-29 pilot and a commander on the ground – an apparent lack of coordination, with no one knowing at first, which of the many different forces (Afghan National Army, Afghan National Police, Police Special Forces, Afghan National Civil Order Police, Afghan Local Police or the vigilantes fighting alongside them) should storm the place. In any event, by the time government forces made their move on the sangar, insurgent reinforcement had already re-manned the bunker and subsequently fended off the attack. The opportunity was lost and as of 23rd of August the sangar of Kandavon was still in the hands of the insurgents.

However, rather than acknowledging that, at least this time, the failure lay solely with the ground forces, the commanders in Raghistan chose to complain about the lack of sufficient, timely air support.

This hardly is a singular case as not only cries for more air support can be heard throughout the country, but frequent also are complaints about the lack of coordination with ground forces. To be fair, it is true that the capabilities of the Afghan Air Force are limited. For example, as of August 23rd, there was reportedly no second A-29 air raid in Raghistan because the planes were needed in other parts of northern Afghanistan. But this is not really the point. Whether they like it or not, Afghan security forces will sooner rather than later have to cope with the reality that even with the completion of their fleet of 27 MD 530F (the last four just arrived on August 25th) light attack helicopters, four Mi-25 helicopter gunships donated by India (three Mi-25 are operational, the fourth is reportedly to be delivered soon) and 20 A-29s (the remaining 12 planes are scheduled to be delivered incrementally in 2017 and 2018) as well as some armed Mi-17 transport helicopters (at least twelve Mi-17 have been configured with fixed forward firing capabilities, including seven capable of employing rockets) the Afghan Air Force won’t be able to supply every one of the many battlefields throughout the country with extended aerial fires, as the capabilities required for this would simply be unsustainable. This is not only due to the fact that a further increase in the size of the Afghan Air Force would be too large of a financial burden for a country so dependent on foreign aid, but also because the Afghan Air Force even now struggles to find enough qualified pilots and crews for the existing aircraft.

Accordingly, Afghan forces should consider how to use their limited air support effectively in order to prevent a repeat of the missed opportunity in Raghistan rather than complaining about the limitation of aerial fires. All the more so, as the incident in Raghistan clearly shows, that combat air support alone is not a magic bullet that solves every problem, as Afghans sometimes seem to infer. To use existing aerial fires more effectively, better coordination of ground operations with the air support is necessary – or as one commander in Raghistan put it, it is necessary that the ground forces even use the “dust and smoke created by the aerial bombardment as cover for their attack.” There might also be a need to rethink the air operations themselves. For example, one commander of the armed civil uprising in Raghistan recounted how effectively the Soviets had employed airpower in these very same hills fighting the Afghan resistance in the 1980s. According to the commander, the Soviets used to fly very low over the ground to engage their targets on a short distance. In contrast, as I witnessed, the Mi-25s of today’s Afghan Air Force fly high in the sky and shoot their rockets from very far away (though, the commander’s criticism notwithstanding, it is unclear whether this was indeed the reason for the alleged missing of their targets).