All of Europe Is a Battleground Against Terrorism 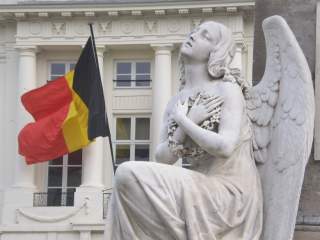 There is no way to sugarcoat it: the European continent, long considered one of the most prosperous, safe and multicultural regions of the world, is effectively a battlefield in the war against international terrorism.

Less than four months after eleven attackers perpetrated the worst act of violence on French soil since World War II, France's Belgian neighbor experienced a nightmare of their own during the morning rush hour on March 22. Strapped with explosive belts and reportedly carrying Kalashnikov rifles, as many as four men who are supposedly members of the Islamic State conducted three orchestrated strikes on two locations that were packed with travelers from around the world. Two suicide bombings in one of the world’s busiest airports turned the check-in counters into a scene of immense destruction, while a separate suicide bombing at a metro line in the Maelbeek district shut down the transportation system. When the grisly scene was over, more than thirty people were killed and the entire city of Brussels was on lockdown.

The two terrorist attacks in Brussels, coming so soon after the massacre in Paris last November, shook the European political establishment to its very core. EU Foreign Affairs commissioner Frederica Mogherini teared up during brief remarks to the press. Italian Prime Minister Matteo Renzi called it a deliberate attack on the very heart of Europe. And French Prime Minister Manuel Valls simply declared “we are at war.”

The carnage in Brussels, however, will extend above and beyond the men and women who were killed and the families who will be spending the rest of their lives mourning the loss of their loved ones. Indeed, at a time when European and U.S. politics are consumed with national debates over surveillance, Syrian refugees and the best way to combat international terrorism, the strikes in Belgium have the potential to add more ammunition to those in Europe who are seeking greater surveillance powers and to politicos in the United States who have long believed that giving asylum to more refugees from the Middle East is a danger to national security.

Even before the simultaneous attacks in Paris, U.S. and European societies were in the constant throes of the privacy vs. liberty debate. If the disclosure of classified information by NSA contractor Edward Snowden renewed the debate in the United States and around the world, the Islamic State has now elevated the subject into a top priority during the U.S. presidential election season.

Europe is not at all immune to the continuous struggle between safety and personal privacy. Before the attacks in Brussels, those who were advocating for greater privacy rights and less government intrusion into the lives of ordinary citizens were making headway. The U.K.’s Intelligence and Security Committee, after scrutinizing the British Government’s expansive surveillance charter, concluded that the proposal was too expansive and lacked gaping holes that could be exploited by the intelligence services to the detriment of an individual’s liberty. And while the House of Commons eventually passed the bill by an overwhelming margin, the proposal still needed to be examined and approved by an investigatory committee that would no doubt greatly weigh evidence provided by technology companies opposed to the measure.

The Brussels attacks, however, will provide the U.K. Government with a far more credible argument that this kind of technological surveillance—from the storage of individual IP addresses to the ability of the government to acquire warrants for telecommunications data—is absolutely required to keep British citizens safe. MPs that were previously skeptical of the government’s claim that a person’s browser history is potentially a critical piece of the intelligence puzzle in the thwarting of terrorist attacks will now have reason to second guess whether their position needs to change.

More Debate Over Refugees in the U.S.

Like the terrorism in Paris last year, the terrorism in Brussels will reverberate throughout the Washington political establishment. During one of the most heated presidential election years where every issue can become a political football, politicians are sure to link the latest attacks in Europe to the Syrian refugee issue. The fact that there is not yet solid proof that one of the terrorists used the wave of Syrian refugees as cover to infiltrate Europe is not at all relevant; Republican lawmakers pushing for lower migration quotas or a full ban on Muslim migrants to the United States will use the tragedy in Belgium to press their point.

Despite passing the House of Representatives last year, Republicans failed to generate enough support in the Senate for a bill that would have required the Federal Bureau of Investigation to certify that each and every refugee from Syria and Iraq “is not a threat to the security of the United States.” Republicans called the legislation a necessity at a time when hundreds of thousands of undocumented migrants are pouring out of a region where insecurity is the rule rather than the exception. Democrats called the effort discriminatory to Muslims seeking safe-haven from terrorism and conflict.

The refugee bill was essentially dead in the U.S. Congress. But it is more likely than ever that Republicans will attempt to again bring the measure up for a debate given what many politicians in Washington will consider a post-Brussels world with far more dangerous circumstances. Democrats who were previously opposed to a litmus test on Muslim refugees coming into the United States for resettlement will now find themselves in a difficult political situation during an election where national security is a critical issue in the minds of American voters: continue to hold the line and risk being labeled as dangerously naïve, or change one’s position and be called a hypocrite?

The Nexus Between Terrorism and Politics

Over the days and weeks ahead, Belgian and European intelligence services and police will search the blast sites for any clues that the terrorists left behind. The European Union—already struggling to defend its competency when Europe’s economic recovery is slow, refugees continue to pour into Europe and its system of open borders is increasingly challenged by mainstream political parties—will try to determine whether the institution as a whole can be reconfigured to improve intelligence coordination and information sharing among its member states.

But the world should also be prepared for more political rhetoric. Discussions over how much surveillance power governments should possess; whether technology companies should continue to lace their products with stronger encryption; and whether the West can afford to take in more refugees will be thrust back into the political conversation.

While the families of the victims grieve and the victims themselves heal, the politicians will bicker amongst themselves about the best way to respond.