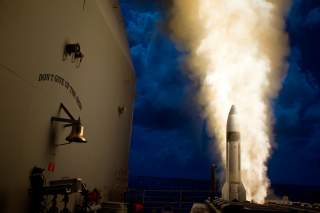 The United States is poised to significantly expand its ballistic missile defense (BMD) capabilities in the coming years thanks to the 2018 National Defense Authorization Act (NDAA). A compromise version of the bill passed Congress on November 16th gives the green light to the Department of Defense to develop new BMD capabilities and expand existing systems. Congress still needs to appropriate funding and the Trump administration will set BMD policy in the months to come, but the NDAA provides valuable insight into the future of U.S. capabilities.

An eye-popping funding increase for the Missile Defense Agency authorized in the NDAA indicates both Congress and the Trump administration’s intention to beef up the nation’s BMD capabilities. The NDAA authorizes $12.3 billion for the agency, a staggering $4.4 billion more than its initial budget request of $7.9 billion. The lion’s share of the increase stems from a last-minute request made by the White House that argued more BMD spending is necessary to respond to the growing North Korea threat. There is no guarantee that Congress will appropriate all of the money that it authorizes in the NDAA, but both Congress and the Trump administration seem intent on throwing more money at BMD.

Most of the BMD programs authorized by the NDAA are supposed to protect the continental United States from a North Korean intercontinental ballistic missile (ICBM). Such systems are very expensive and have a poor testing record, but the threat posed by Pyongyang’s ICBMs provides political cover for policymakers to make big investments in homeland BMD.

The homeland BMD improvements in the NDAA fit into two broad categories. The first category includes existing capabilities that will expand and be tested more frequently. For example, the NDAA authorizes up to twenty additional interceptors for the Ground-Based Midcourse Defense system and gives the Department of Defense a green light to expand the capacity of the system’s missile fields in Fort Greely, Alaska. The NDAA also requires the Missile Defense Agency to test the SM-3 Block IIA interceptor, which started conducting intercept tests earlier this year, against an ICBM-range target no later than December 31, 2020.

The second category of BMD systems in the NDAA include more exotic capabilities that are in very early stages of development. Examples of these capabilities include space-based sensors and interceptors, and systems capable of destroying ballistic missiles in the boost phase of flight. The sections of the NDAA that deal with these capabilities come with the caveat that their development is tied to the ongoing BMD review. If the review recommends developing such systems, the Department of Defense will pursue the capability. Many of the exotic capabilities in the NDAA will be very expensive to develop and deploy, and they probably won’t work as intended.

North Korea is the proximate cause of the BMD expansion teed up by the NDAA, but the strategic impact of these systems go beyond the peninsula. An expanded and improved U.S. BMD architecture could damage strategic stability with other nuclear powers. Building a better shield against missile attack seems entirely defensive to policymakers in Washington, but to states engaged in security competition with the United States this “shield” could encourage U.S. aggression by reducing the targeted state’s ability to retaliate against a U.S. attack.

From a purely technical perspective, the shortcomings of America’s BMD capabilities should reassure other nuclear powers that their arsenals still pose a viable deterrent to a U.S. attack. Indeed, U.S. policy statements on BMD consistently mention that the systems are intended to defend against limited missile attacks by relatively unsophisticated adversaries such as Iran or North Korea. However, America’s relentless pursuit of more numerous and advanced BMD capabilities coupled with the development of increasingly accurate nuclear and conventional strike capabilities foster the perception that the United States wants to break out of nuclear vulnerability.

If nuclear powers locked in broader competition with the United States (e.g. Russia and China) make nuclear posture decisions based on worst-case perceptions, a future crisis with the United States could have very dangerous escalation risks. Strategic stability is mentioned briefly in the NDAA, but the bulk of the bill and the overall outlook of both the Congress and the Trump administration toward BMD capabilities suggest minimal concern about the impact these systems could have on strategic stability. Before Congress authorizes even more BMD capabilities, it would be wise to consider the reaction of other nuclear powers besides North Korea.