Is America Prepared for a Post-Assad Vacuum in Syria? 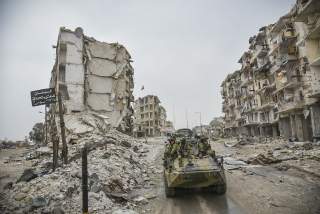 Donald Trump last week fired fifty-nine cruise missiles at a Syrian airfield, and hawkish pundits have been cheering ever since. Over at the Atlantic, Shadi Hamid gave Trump’s attack a thumbs-up and issued a number of challenges to those skeptical of deeper American involvement in Syria. Many of his objections are salient—the noninterventionist side of the debate has plenty of room for improvement, from its susceptibility to conspiracy theories to its occasional equivocation over heinous mass murderer Bashar al-Assad.

But one section of Hamid’s essay is especially telling. He recommends as a model for future action in Syria the Bosnian intervention, in which “air power forced the Serbs to the negotiating table, eventually leading to the Dayton Accords (a key example of military action in the service of diplomacy).” That’s true, and the Balkans stand as one of the more successful examples of American muscle flexing in recent memory. But that memory is also only so recent. There’s a far more contemporary body of precedent for us to draw upon, all of which, like Syria, is set in the Middle East. What will become of Trump’s missile strike? Recent history betokens nothing good.

The United States invaded Afghanistan after 9/11, intending to destroy the Taliban and replace it with a Western-friendly democracy. America was instead vacuumed into a fifteen-year-and-counting military occupation as the country fractured into warlord-administered fiefdoms and jihadists proliferated. Despite a temporary troop surge under President Obama, the Taliban today exerts control over about 10 percent of Afghanistan’s districts and contests about half of them, while civil society remains crippled by factionalism and terrorism.

The United States invaded Iraq back in 2003, with Donald Rumsfeld espousing a linear mission: get in, knock out Saddam Hussein, turn governance over to the Iraqis and get out. The reality was the violent uncorking of Islamic sectarianism: Iraq’s Shiite majority obtained political power, Sunnis bolstered by Saddam’s former Baathist masterminds retaliated furiously, and coalition forces found themselves trapped in the middle of a strange and insensate civil war. Today, U.S. Marines are back in Iraq, and the sectarian pendulum is swinging once again as Sunnis stew under the oppression of Shiite militias ostensibly sent to liberate them from the Islamic State.

The United States invaded Libya under President Obama, with the initial goal of punishing Muammar el-Qaddafi for his alleged atrocities against civilians. America wound up destroying the Qaddafi regime entirely and transforming Libya into an epicenter for anarchic violence in Northern Africa. Smuggled Qaddafi weapons helped fuel terrorism in Tunisia and Mali. Meanwhile, the Islamic State set up shop and for a time established the Libyan city of Sirte as its auxiliary capital. Libya today is a land of fractious militias and competing governments, of persistent jihadists and the American bombs that (once more) seek them out.

All three of these cases have followed a pattern: Washington sets out with a relatively modest set of objectives, mission creep settles in, the conflict becomes more protracted, the violence mushrooms, the jihadists flourish, the quagmire opens and the host country is left roiled by chaos. Don’t worry, hawks say, we only want a limited campaign in Syria. But why shouldn’t the template reassert itself? What’s to stop us from getting tugged into a deeper war, with the Islamic State and Syria’s grab bag of Islamist groups the primary beneficiaries? Advocating military action in Syria while Afghanistan, Iraq and Libya burn is a bit like promoting timeshares in Hawaii while volcanoes erupt in the background. It’s incumbent on interventionists to explain why this time will be the exception.

Syria might not be Iraq, as Hamid observes, but the outcome of military action there is more likely to resemble the post-Saddam vacuum than it is the multination accord of the Balkans. The increasingly sectarian flavor, the sheer complexity of the conflict and jihadist groups lurking around the bend are all too familiar, and the déjà vu alone should be enough to validate those of us who advocate caution. We’re not isolationists and we’re certainly not indifferent to the suffering of the Syrian people. Our stance is akin to that of previous presidents who militarily (though not always politically and diplomatically) abstained from a multitude of third-world conflicts. We also don’t claim to have an alternative solution: such a panacea, in our thinking, doesn’t exist. We stare into the Syrian tangle and see mostly bad options and hostile actors, an awful mess that further American involvement is likely only to make worse.

Disagree with that little manifesto all you like, but it consists of serious arguments that aren’t going to be rebutted by twaddle about “moral clarity” and “weakness emboldening our adversaries.” Speaking of that latter cliché, have you noticed that it’s military action that’s been emboldening America’s adversaries lately? Following Trump’s airfield attack, Russia is drawing red lines and making it known that the United States isn’t welcome in Syria. Iran remains defiant. North Korea is threatening nuclear war. China is deploying troops to the Yalu River. Untying these geopolitical knots will depend heavily on diplomacy, starting with Rex Tillerson’s somber trip to Moscow.

Maybe Tillerson can make some headway; maybe Russia will consent to pressuring Assad into a transition and this time really will be different. It’s unlikely, but a little circumspection never hurts when analyzing the Middle East, which regularly confounds the expectations of even those expecting to be confounded. Over at the Guardian, Marina Hyde, my favorite left-of-center writer, suggests that everyone swallow a humility pill:

If you’re planning to meet friends in the pub tonight, be warned: many of them will know everything. Many of them will caution against the absolute folly of starting a land war in Asia, and they will do so with the same degree of authority as a state department analyst of 30 years’ experience, even though we all realise they only truly know this because it’s a famous line from William Goldman’s movie The Princess Bride. Everybody knows everything. . . . As well as being hugely fashionable, simplicity is much more comforting than the alternative.

None of us can predict with vise-grip certainty how Syria will turn out, not you, not me, not the esteemed foreign-policy scholar at the William Henry Harrison Institute for Enduring Sinecures, not the adorable Bret Stephens, who in one tweet advocated partitioning Syria, empowering the Kurds, no-fly zones, no-drive zones, an Arab coalition to fight ISIS and continued American air support—just add water and stir. We can’t know what will happen, but we can learn from our mistakes, and right now, the signposts of history do not point in an encouraging direction.