America Shouldn't Back Away from Cuba 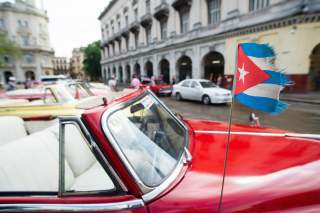 On Friday afternoon, President Trump laid out his long-awaited policy on Cuba during a speech in Miami. An advance memo stated that his policy would be guided by national-security interests and “solidarity with the Cuban people,” promoting a “stable, prosperous, and free country for the Cuban people.” Unfortunately, the policy tools he announced are far more likely to achieve the opposite effect.

If the president truly wants to change the behavior of the communist regime, there is a better way—and a new opportunity will arise early next year to accelerate that improvement.

In choosing the best policies, it is necessary to revisit assumptions that undergird current policy, many of which have existed for decades. Shortly after Cuban dictator Fidel Castro seized power in 1959 and expropriated U.S. properties, the American government imposed an embargo on Cuba. At the time, communism was spreading in various places around the world, and many in the United States feared it might spread to more countries, putting at risk other democracies. In that environment, it’s not hard to understand why U.S. officials imposed and then maintained the embargo. That time no longer exists.

Communism has been exposed as the bankrupt governing philosophy that it always was. Even our former enemies China and Vietnam have substantially reformed the way they govern and do business with the rest of the world. The United States has fostered their opening by increasing trade ties with both nations, to the benefit of the citizens of each country. North Korea and Cuba are left alone in the world as unrepentant communist governments, and their people suffer because of it.

Most in the Cuban revolution were fighting for freedom and democracy. Shortly after taking power in Havana, Castro promised to restore civil and political liberties. In a 1959 visit to the United States, Castro emphatically told the American people, “I know the world thinks of us, we are Communists, and of course I have said very clear that we are not Communists; very clear.” It didn’t take long, however, for his “very clear” statement to be exposed as his communist ideology began to manifest to the detriment of the Cuban people.

Last month we visited Cuba for the first time, on a religious visa, to work with a group of Cuban pastors. What we saw there was both disheartening and inspiring. In many ways, Cuba appears stuck in the early 1960s, when Castro took over. The vast majority of cars on the road—and there weren’t many—were vintage 1950s models (the Cubans have become masters at keeping old cars running). Most taxis were bicycle-powered or horse-drawn. The internet was only accessible in a few spots around the country. Shelves in stores were typically half full. Employment—despite government claims to the contrary—was abysmally low, and those with jobs received very low pay.

On the plus side, however, we had the privilege of meeting quite a number of Cubans living in and around Santa Clara, and were impressed with what we observed. They were industrious, creative, hardworking and long-suffering. They cared about their families and communities, and, frankly speaking, had beautiful spirits despite the oppressive nature of their government (most Cubans we met were very cautious in saying anything negative about the regime, even in private). In short, these are the kind of people with whom the United States should desire warm relations.

According to the U.S. State Department, “U.S. policy toward Cuba is focused on supporting our values, such as freedom of speech and assembly and the ability to access information, through engagement.” The communist government of Cuba is solely responsible for the reprehensible living conditions we observed, and it is understandable that our country would want to see it change how it governs. But Washington has to be wise and shrewd in how it seeks to accomplish that goal. The Trump administration has a unique opportunity to be the first administration in nearly sixty years to moderate the communist government.

Cuba has already announced that Raúl Castro will step down as president on February 24 of next year. The heir apparent, fifty-seven-year-old Miguel Díaz-Canel, has already been announced. According to press reports, Díaz-Canel is a modern-thinking person who genuinely cares about the people. Many Cubans—especially the millennial generation—are very hopeful that he will institute positive changes in the economy and increase freedoms for the people. There is a clear hunger for more liberty and advanced economic opportunity, and the Trump administration can take advantage of that to propel positive change.

Instead of greeting Díaz-Canel next year with demands and threats of increased sanctions, President Trump should hold out the possibility of increased cooperation and expanded trade. The Cuban form of government is never going to change because the United States instructs or demands it to do so. Such attempts will almost certainly have the opposite effect.

But if Washington instead further relaxes its laws and trade restrictions, demonstrating a genuine willingness to invest in Cuba’s future, the drive for further economic and governing reforms will naturally emerge from within. If improved relations and the diminution of the communist government are U.S. objectives, this is the best way to achieve it.

Cuba represents no threat of any kind to the United States. We risk nothing by expanding engagement and cooperation with Cuba, yet doing so substantially increases our chances of accomplishing American goals of fostering democracy. Rolling back the current opening will make it less likely that Cuban officials will reform, increases the likelihood of preventing improved quality of life for regular Cubans, and unnecessarily prevents the expansion of American business abroad. We therefore urge the Trump administration and Congress to seize this opportunity to foster democracy from within Cuba.

Daniel L. Davis is a Senior Fellow for Defense Priorities. Frances L. Garcia has a BS in Government and International Politics from George Mason and is pursuing a Master’s of Public Administration and Public Policy from American University. The views in this article are those of the authors alone and do not reflect the opinions of Defense Priorities. Davis can be followed @DanielLDavis1.