America vs. North Korea: Can a Brutal War be Avoided? 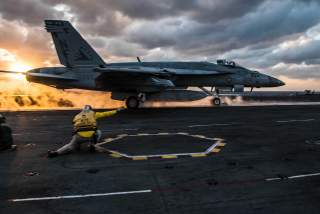 For logical and traceable reasons, the chances of war on the Korean peninsula have moved beyond “possible” and now solidly into “likely” territory. The combined actions, decisions, and positions of Presidents George W. Bush, Obama, and Trump, along with North Korean dictators Kim Il-sung, Kim Jong-il and Kim Jong-un, have perversely created a no-win situation in which war may now be unavoidable––a tragic and avoidable situation for which hundreds of thousands or millions of Americans, South Koreas, and Japanese may pay with their lives.

With the adoption of a rational policy, however, American security can be assured, and war avoided.

The seeds of today’s crisis were planted in October 1994 when newly installed North Korean dictator Kim Jong-il signed the Agreed Framework with the Clinton Administration. North Korea pledged to cease construction of nuclear reactors suspected of fueling a nuclear weapons program in exchange for the U.S. funding two light-water reactors that could not be used to produce material for a nuclear bomb. Inspectors from the International Atomic Energy Agency (IAEA) were required to certify North Korea’s implementation.

Kim initially complied with the agreement and in 1997 met with representatives of South Korea and the U.S., continuing what Secretary of State Madeline Albright termed “this historic process.”  Soon thereafter, however, evidence began to accumulate that Pyongyang was secretly establishing a weapons program and impeding IAEA inspectors. Even Clinton’s patience started to run out, and in March 2000 he reported to Congress that he could not certify North Korea was not violating the Agreed Framework by secretly pursuing a weapons program.

President Bush, with the encouragement of then-Undersecretary of State John Bolton, called out North Korea as a member of the “axis of evil” in his 2002 State of the Union address, adding to Kim’s paranoia of U.S. attack. In part citing this declaration, North Korea officially withdrew from the Nuclear Nonproliferation Treaty (NPT) in January 2003 and kicked out IAEA inspectors. Free from the NPT and IAEA inspections, Kim Jong-il accelerated the development of his clandestine nuclear program. In October 2006 North Korea conducted the first of what has thus far been six underground nuclear tests.

In March of 2011, President Obama made a crucial decision that today makes any diplomatic solution with the Kim regime almost impossible to attain. In an attempt to “prevent a humanitarian catastrophe” in Libya, Obama authorized the U.S. military to join with other nations in bombing regime forces. Seven months later, Libyan dictator Muammar Kaddafi was driven from power and was brutally and publicly murdered by frenzied crowds. More than any other single event, Kaddafi’s death has convinced current North Korean dictator Kim Jong-un that negotiating away his nuclear weapons is a virtual death sentence.

In December 2003, Bush had negotiated with Kaddafi to end and verifiably dismantle his nuclear weapon’s program. "Colonel Kaddafi's commitment, once it is fulfilled,” Bush boasted at the time, “will make our country more safe and the world more peaceful." That commitment was fulfilled in 2009. Two years later, however, when Obama was the President, and Kaddafi had no nuclear weapons to defend himself, he was powerless to stop the allied air assault and lost his life. A powerful lesson was imprinted on the mind of Kim Jong-un: don’t trust American diplomacy.

President Trump is presently in Asia, discussing the Korean crisis with heads of states of several countries, including South Korea, Japan, and China. On Monday he stated, “The era of strategic patience is over,” while holding out the hope on Tuesday that he could “make a deal” with Kim Jong-un and avoid war.

Yet just last month at the U.N. Trump flatly stated that “denuclearization is its only acceptable future,” but that if he is forced to, Trump “will have no choice but to totally destroy North Korea.”  Thus, we are left with two irreconcilable positions with war hanging in the balance.

The president says he will not allow North Korea to have the ability to strike U.S. territory with a nuclear weapon. The North Korean dictator says he will not give up his weapons under any circumstances. Washington says it wants a diplomatic solution, while Pyongyang has signaled it does not trust the U.S. and won’t put denuclearization on the table. As a result, there are only three possible outcomes:

2) Trump’s strong rhetoric pressures Kim to give up his weapons, and he is left to hopes a future U.S. president does not attack him;

Given Trump’s personality, his constant reminders of how 25 years of “diplomacy” have resulted in this crisis, and that strategic patience has come to an end, the first appears extremely unlikely. Since Kim is utterly convinced that the only chance he has to survive is to possess a credible nuclear deterrent against the U.S., the second option appears even less likely than the first. That leaves option number three: war

Trump has made repeated threats against North Korea––including last month when CIA Director Mike Pompeo implied the U.S. might attempt an assassination of the dictator. “With respect to, if Kim Jong-un should vanish,” he said in an October speech, “given the history of the CIA, I’m just not going to talk about it.” One can only hope that such an idea was mere passing fancy, as the chances of success are incredibly small, and the consequences of the attempt––whether successful or not––are an overt act of war and would certainly draw a lethal response from Pyongyang.

Thae Young-ho, the second highest ranking official ever to defect to the West, testified at the House Foreign Affairs Committee earlier this month that if the U.S. launches any military strikes against North Korea, their military officers “are trained to press the button without any further instructions from the general command." If any bombs or missiles are sighted, he continued, then immediately “artillery and short-range missiles will fire against South Korea.”

Such strikes could kill thousands of South Koreans, American citizens, and U.S. military personnel stationed in the northern part of the Republic of Korea. Seoul would not sit idly by and would launch major retaliatory strikes, and the situation could quickly spiral out of anyone’s control into an all-out war. If Kim Jong-un believes his regime would be threatened by an invasion of ground forces from the south, the chances are high that he would use a nuclear weapon, and millions will likely perish.

Moreover, China has clearly stated that if war broke out on the peninsula as a result of U.S. attack, and America tried to overthrow the government, “China will prevent them from doing so.”  It is impossible to predict the scale and consequence of a military clash between U.S. and Chinese forces, but such an event could quickly escalate to dangerous levels.

It should be clear by now that if President Trump orders preventive military action against North Korea, there is no rational scenario under which the interests and security of the United States would be improved. It is instead a virtual certainty that any such action would harm, potentially catastrophically, American interests and security.

Even at this late hour, however, such a war is not inevitable, and it is still not too late for the president to adopt a realistic course of action that would prevent war while also safeguarding the U.S. homeland.

As Thae Young-ho pointed out in his Congressional testimony, the Kim regime is not as solid as often depicted, and his totalitarian control over the population outside of Pyongyang is weakening. With an active and aggressive information operation plan, he said, the people within North Korea may eventually rise up as did the East Germans and others who had been imprisoned behind the Iron Curtain.

The objective of U.S. diplomatic and military policy in the region should be first to protect the U.S. mainland, and second to prevent the loss of life and destruction of property of U.S. allies in South Korea and Japan. Those goals can be accomplished by using firm deterrence, close cooperation with our allies, and an effective program to broadcast information about the outside world to the North Korean population. The use of preventive military action will almost certainly harm U.S. national security.

National Security Advisor H.R. McMaster said the U.S. was “running out of time” to solve the crisis in Korea, implying that military action will be needed within “a few months.” He is wrong.  Time is on our side, not on Kim Jong-un’s. A rational, logical, and patient foreign policy will preserve the lives of our allies, prevent the use of nuclear weapons by North Korea, and increase American security. If time is running out on anything, I fear it may be on hoping Trump chooses a rational policy instead of a reckless militaristic one.