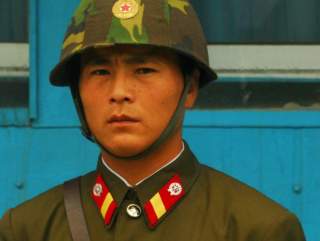 American GIs fighting in the Korean War had a word for it—FUBAR. That expression applies just as well to current U.S. policy toward North Korea.

The shortcomings of this policy were on full display in a recent speech by Assistant Secretary of State for East Asian and Pacific Affairs Daniel Russel in Washington.

How U.S. and allied defense and deterrence will fare as North Korea continues to improve and expand its nuclear and missile arsenals is not at all clear. Indeed, Russel was dismissive of North Korean weapons advances: Kim Jong-un, he claimed, “has made splashes in the ocean with missiles and detonated nuclear devices underground, but it has gotten him exactly nothing in terms of respect, security, economic support, or diplomatic recognition.” Seoul and Tokyo may not regard North Korea’s weapons progress so cavalierly.

For Russel, pressure takes the form of sanctions. “The goal of sanctions is not to harm the North Korean people—although the DPRK has regrettably prioritized offensive weapons over their livelihood,” he said. “The goal is to bring North Korea’s leaders to the realization that there is no viable alternative to negotiations.”

By that he meant negotiations on U.S. terms. “The way forward,” Russel insisted, “starts with North Korea freezing all its nuclear activities, like Iran did while it negotiated. And it starts with a credible declaration of the North’s past activities and IAEA inspection of its nuclear sites as a first step.” What’s missing from his formulation is any notion of reciprocity, which is the essence of negotiation.

Russel was quick to disparage North Koreans’ security concerns: Washington will not “be diverted by their claims that their actions are justified—because the United States has ‘hostile policy’ toward them—and that what’s needed is a peace treaty. These are diversionary tactics to shift the international community away from denuclearization.”

Lest anyone doubt the U.S. stance, he added, “The point is not to close doors to dialogue, it’s to close inauthentic ones that lead to dead ends.” Ignoring the North’s security concerns invites a dialogue of the deaf.

Russel even endorsed the South Korean president’s call for North Korea’s collapse: “President Park has laid out a vision for reintegrating North Korea and its people with the world—a vision based on the belief that all Koreans want to overcome division and build a better future.” Her “vision” also precludes any possibility of negotiating.

For Russel, the past is prologue in negotiating with North Korea. “The record makes it clear,” he declared, “that the United States has consistently made a good faith effort to reach a denuclearization deal through diplomacy.”

Like most propaganda, his claim is at best a half-truth. As Russel himself acknowledged, the first significant result of nuclear diplomacy, the 1994 Agreed Framework, halted all production of fissile material in the North for nearly a decade even though “there were implementation problems on both sides.” Never mind that Washington did little to “move toward full normalization of political and economic relations” as it was obliged to do. In Russel’s view the blame lies squarely with Pyongyang: “Looking at the big picture, the North squandered the opportunity to open to the world. Instead, it sought another path to the bomb—uranium enrichment.”

Russel repeated his one-sided version of the negotiating history in discussing the Six-Party Joint Statement of 2005, which committed the United States to negotiate “a permanent peace regime on the Korean Peninsula.” He conveniently ignores that the ink was scarcely dry on that accord when Washington moved to block the North’s access to banks around the world.

He reminded his audience that “President Obama came into office promising an outstretched hand to any foe that would unclench its fist.” In Russel’s telling, Obama “was greeted with a ballistic missile test in the form of a ‘satellite launch,’ and the North’s second nuclear detonation.” He neglects mentioning that South Korea, with U.S. support, had reneged on the 2005 accord by failing to deliver promised energy aid.

Sustained diplomatic give-and-take is the only realistic way to keep North Korea from arming. While there are reasonable grounds for skepticism about negotiating with North Korea, Russel’s biased negotiating history would dissuade anyone from trying.

If Washington is not to repeat the past it will have to sit down with Pyongyang and address both sides’ security concerns starting with reciprocal steps—for instance, suspension of the North’s nuclear and missile tests and fissile material production in return for a damping down of allied military exercises and committing to a peace process in Korea. It will also have to overcome Seoul’s reluctance to engage Pyongyang in the process.