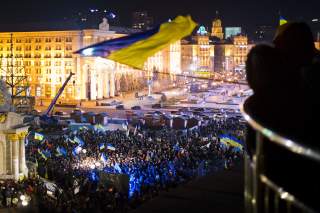 There is an abundance of outrage in the United States about Russia’s alleged meddling in the 2016 presidential election. Multiple investigations are taking place, and Moscow’s conduct was a major justification for the sanctions legislation that Congress just passed. Some furious political figures and members of the media insist that the Putin government’s interference constitutes an act of war. One especially agitated House member even compared it explicitly to the Pearl Harbor and 9/11 attacks.

Such umbrage might be more credible if the United States refrained from engaging in similar conduct. But the historical record shows that Washington has meddled in the political affairs of dozens of countries—including many democracies. An egregious example occurred in Ukraine during the Euromaidan Revolution of 2014.

Ukrainian president Viktor Yanukovych was not an admirable character. After his election in 2010, he used patronage and other instruments of state power in a flagrant fashion to the advantage of his political party. That high-handed behavior and legendary corruption alienated large portions of Ukraine’s population. As the Ukrainian economy languished and fell farther and farther behind those of Poland and other East European neighbors that had implemented significant market-oriented reforms, public anger at Yanukovych mounted. When he rejected the European Union’s terms for an association agreement in late 2013, in favor of a Russian offer, angry demonstrators filled Kiev’s Independence Square, known as the Maidan, as well as sites in other cities.

Despite his leadership defects and character flaws, Yanukovych had been duly elected in balloting that international observers considered reasonably free and fair—about the best standard one can hope for outside the mature Western democracies. A decent respect for democratic institutions and procedures meant that he ought to be able to serve out his lawful term as president, which would end in 2016.

Neither the domestic opposition nor Washington and its European Union allies behaved in that fashion. Instead, Western leaders made it clear that they supported the efforts of demonstrators to force Yanukovych to reverse course and approve the EU agreement or, if he would not do so, to remove the president before his term expired. Sen. John McCain (R-AZ), the ranking Republican on the Senate Armed Services Committee, went to Kiev to show solidarity with the Euromaidan activists. McCain dined with opposition leaders, including members of the ultra right-wing Svoboda Party, and later appeared on stage in Maidan Square during a mass rally. He stood shoulder to shoulder with Svoboda leader Oleg Tyagnibok.

But McCain’s actions were a model of diplomatic restraint compared to the conduct of Victoria Nuland, the assistant secretary of state for European and Eurasian Affairs. As Ukraine’s political crisis deepened, Nuland and her subordinates became more brazen in favoring the anti-Yanukovych demonstrators. Nuland noted in a speech to the U.S.-Ukraine Foundation on December 13, 2013, that she had traveled to Ukraine three times in the weeks following the start of the demonstrations. Visiting the Maidan on December 5, she handed out cookies to demonstrators and expressed support for their cause.

The extent of the Obama administration’s meddling in Ukraine’s politics was breathtaking. Russian intelligence intercepted and leaked to the international media a Nuland telephone call in which she and U.S. ambassador to Ukraine Geoffey Pyatt discussed in detail their preferences for specific personnel in a post-Yanukovych government. The U.S-favored candidates included Arseniy Yatsenyuk, the man who became prime minister once Yanukovych was ousted from power. During the telephone call, Nuland stated enthusiastically that “Yats is the guy” who would do the best job.

Nuland and Pyatt were engaged in such planning at a time when Yanukovych was still Ukraine’s lawful president. It was startling to have diplomatic representatives of a foreign country—and a country that routinely touts the need to respect democratic processes and the sovereignty of other nations—to be scheming about removing an elected government and replacing it with officials meriting U.S. approval.

Washington’s conduct not only constituted meddling, it bordered on micromanagement. At one point, Pyatt mentioned the complex dynamic among the three principal opposition leaders, Yatsenyuk, Oleh Tyahnybok, and Vitali Klitschko. Both Pyatt and Nuland wanted to keep Tyahnybok and Klitschko out of an interim government. In the former case, they worried about his extremist ties; in the latter, they seemed to want him to wait and make a bid for office on a longer-term basis. Nuland stated that “I don’t think Klitsch should go into the government. I don’t think it’s necessary.” She added that what Yatseniuk needed “is Klitsch and Tyanhybok on the outside.”

The two diplomats also were prepared to escalate the already extensive U.S. involvement in Ukraine’s political turbulence. Pyatt stated bluntly that “we want to try to get somebody with an international personality to come out here and help to midwife this thing [the political transition].” Nuland clearly had Vice President Joe Biden in mind for that role. Noting that the vice president’s national security adviser was in direct contact with her, Nuland related that she told him “probably tomorrow for an atta-boy and to get the details to stick. So Biden’s willing.”

Both the Obama administration and most of the American news media portrayed the Euromaidan Revolution as a spontaneous, popular uprising against a corrupt and brutal government.

A February 24, 2014, Washington Post editorial celebrated the Maidan demonstrators and their successful campaign to overthrow Yanukovych. The “moves were democratic,” the Washington Post concluded, and “Kiev is now controlled by pro-Western parties.”

It was a grotesque distortion to portray the events in Ukraine as a purely indigenous, popular uprising. The Nuland-Pyatt telephone conversation and other actions confirm that the United States was considerably more than a passive observer to the turbulence. Instead, U.S. officials were blatantly meddling in Ukraine. Such conduct was utterly improper. The United States had no right to try to orchestrate political outcomes in another country—especially one on the border of another great power. It is no wonder that Russia reacted badly to the unconstitutional ouster of an elected, pro-Russian government—an ouster that occurred not only with Washington’s blessing, but apparently with its assistance.

That episode, as well as earlier ones involving Italy, France and other democratic countries, should be kept in mind the next time U.S. political leaders or the media publicly fume about Russia’s apparent interference in America’s 2016 elections. One can legitimately condemn some aspects of Moscow’s behavior, but the force of America’s moral outrage is vitiated by the stench of U.S. hypocrisy.