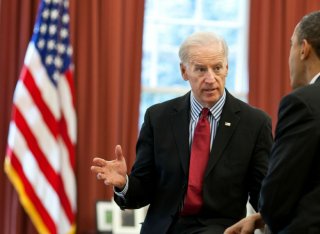 In his just-completed trip to the Baltic republics, Vice President Joe Biden reassured his hosts that the U.S. commitment to their security through NATO was rock solid. And any worries they might have because of comments that Donald Trump had made during the ongoing presidential campaign Biden dismissed as completely unwarranted. “I want to make it absolutely clear to all the people in Baltic states, we have pledged our sacred honor, the United States of America . . . to the NATO treaty and Article Five.”

He then speculated that because Trump had never held elective office, perhaps he did not understand the mutual defense obligation contained in that article. In any case, “the fact that you hear something” contrary to that treaty obligation “from a presidential candidate in the other party, it’s . . . nothing that should be taken seriously.” There was, Biden told his hosts, “continued overwhelming bipartisan commitment in the United States of America in both political parties to maintain our commitment to NATO.”

It is hard to tell which is the more offensive feature of Biden’s comments—the overall tone of smug arrogance or the implicit blasé attitude about the risks his own country incurs to protect the tiny Baltic republics. Both aspects indicate a man who is out of touch with key trends in America’s foreign-policy debate. But then Joe Biden is the official who actually argued that long-time Egyptian tyrant Hosni Mubarak was not a dictator. Being grounded in foreign-policy reality does not appear to be his strong suit.

Even though Hillary Clinton currently leads in the public-opinion polls, the election is still more than two months away. A lot can happen in that amount of time, and it is entirely possible that Donald Trump could become the next president of the United States. To tell an audience in a NATO-member country that they can simply dismiss what that individual has said about NATO is both illogical and irresponsible.

NATO under a Trump presidency is not likely to be business as usual, however much Biden and other members of the complacent foreign-policy establishments on both sides of the Atlantic might wish it were so. Trump has labeled the alliance “obsolete,” and he has repeatedly blasted the European allies for insufficient burden-sharing. “Our allies are not paying their fair share,” of the collective-defense effort, he thundered during a key foreign-policy address sponsored by the National Interest in April. “The countries we are defending must pay for the cost of this defense, and if not, the U.S. must be prepared to let these countries defend themselves.” [Emphasis added] He did go on to say that “the whole world will be safer if the allies do their part to support our common defense and security,” but his willingness to walk away from NATO also was evident.

Trump has displayed a similar ambivalence regarding the specific defense commitment to the three Baltic republics. He has indicated a willingness to defend those countries—but only if they are fulfilling all of their obligations (which he never precisely defines) to the United States. Otherwise, he implies but never states outright, they are on their own. But those countries are not even meeting their commitments to NATO, much less to the United States as NATO’s leader. At present, of the three countries, only Estonia has fulfilled the promise that all NATO members made following the 2006 summit to devote at least 2 percent of annual gross domestic product to defense.

This is a case where Trump might be right—but if so, it is not for the right reason. The main problem with America’s Article 5 defense commitment to the Baltic republics is not excessive cost or whether they are bearing their “fair share” of the collective-defense burden. For countries that purport to worry about Russian aggression, their efforts have indeed been shockingly insufficient. For example, Lithuania’s military spending climbed above a meager 1 percent for the first time in 2015. But in fairness, the free-riding of the Baltic republics on America’s security exertions has been no more pronounced or outrageous than the other European members of NATO.

And, frankly, it would not matter all that much if they made a Herculean effort. They are still tiny states on the border of a much larger, more powerful country: Russia. A recent Rand Corporation study estimated that Russian forces could probably overrun the Baltic countries in as little as three days. The only way to prevent such an outcome is a powerful deterrent—and that means a willingness to link America’s fate directly to the fate of those nations. That’s the real essence of Article 5.

Defenders of the NATO status quo argue that this merely continues what America did (successfully) throughout the Cold War. But that argument ignores some crucial differences. During the Cold War, the United States was willing to risk general war—even a nuclear war—to keep a rapaciously expansionistic totalitarian power from dominating Western Europe, a vital strategic and economic hub. Now, we are expected to incur the same risks to protect three small states on Russia’s border that are of no special economic or strategic importance to us. Indeed, at various times in the past, the Baltic states have been subsumed in a larger political entity with Russia—the Russian empire during the nineteenth century and early twentieth century and the Soviet Union during most of the remainder of the twentieth century. Moscow’s rule was obviously unpleasant for the inhabitants, but preventing it was never a strategic priority before for the United States, and there is no compelling reason why it should be one now.

Biden and others who are so casual about the sanctity of U.S. security assurances operate on the implicit assumption that the commitment will never be challenged. That may have made sense in the Cold War context. Any Soviet leader likely understood how important Western Europe was to American interests and would hesitate before challenging Washington’s commitment, given the potentially dire consequences. But we ought to ask whether Vladimir Putin or some future Russian leader will be equally certain that the United States is willing to risk a general war with nuclear implications merely to defend three microstates that used to be part of the Russian empire. If we are serious about honoring the Article 5 commitment, we had better hope that we never encounter a gambler in the Kremlin.

We need to rethink the Article 5 obligation and, for that matter, continuing U.S. membership in NATO. Responsible scholars have criticized that alliance as an increasingly dangerous anachronism for years. Donald Trump has merely brought that debate, albeit often in simplistic and garbled form, out into the political domain, and the strength of his candidacy indicates at least some public receptivity to the criticism. Joe Biden and the other defenders of the “bipartisan consensus” may assure foreign audiences all they wish that everything is fine, but the winds of change are blowing.